Stuart Orlando Scott was a famous American sportscaster who extensively worked for ESPN. His most memorable work at ESPN was for its flagship show ‘SportsCenter’. For ESPN, he consistently covered NBA and NFL as well. He also covered NBA for ABC network. Along with some serious sports knowledge, he incorporated hip hop style and numerous catch phrases in his commentary which made his style unique. Some of his catch phrases like ‘Boo-yah!’ entered the main stream culture as well. He was diagnosed with cancer in 2007 and thereafter his lengthy battle with the disease began. For his fight against cancer, he was awarded ‘Jimmy V Award for Perseverance’. He ultimately succumbed to cancer at the age of 49 leaving the sports world and fans extremely sad. Erin Andrews
Sportscasters #12
Media Personalities #384
19th July In History
DID WE MISS SOMEONE?
CLICK HERE AND TELL US
WE'LL MAKE SURE
THEY'RE HERE A.S.A.P
Quick Facts

American Celebrities
Black Media Personalities
American Men
University Of North Carolina At Chapel Hill
Tall Celebrities
Childhood & Early Life
Stuart Scott was born on 19th July 1965 in Chicago, Illinois and was the youngest child of O. Ray and Jacqueline Scott. His father was a postal inspector. He had two sisters, Susan and Synthia and a brother, Stephen.
As Scott turned seven, the entire family moved to Winston-Salem in North Carolina.
He completed his 9th and 10th grade from Mount Tabor High School and thereafter went to Richard J. Reynolds High School for the next two years. He graduated from there in 1983.
While in high school, he took interest in athletics and ran tracks along with playing football. For his college education, he went to the University of North Carolina and graduated in speech communication in 1987.
While in college, he played wide receiver and defensive back on the club football team, joined Alpha Phi Alpha fraternity and became a part of the student radio station, WXYC.
Continue Reading Below
You May Like

Famous Beautiful Women With Green Eyes
Career
After completing his graduation, Stuart Scott joined WPDE-TV in Florence as a news reporter and weekend sports anchor. It was during his tenure here between 1987 and 1988 that he came up with his popular catchphrase ‘as cool as the other side of the pillow’.
He next worked for WRAL-TV 5 in Raleigh as a news reporter between 1988 and 1990. He followed this up by working as a sports reporter and sports anchor for WESH, the NBC affiliated television channel serving in Orlando.
Al Jaffe, ESPN's vice president for talent, was searching for a sportscaster who could effectively engage the younger audience. He found in Scott exactly what he was looking for and hired him in 1993 to work at ESPN.
His first show was ESPN2's ‘SportsNight’ program in which he did a short sportscast ‘SportsSmash’ twice an hour. He also became the host for ‘Edge NFL Matchup’, a show that aired once a week and showcased some of the select football games of last seven days.
When Keith Olbermann shifted from ‘SportsNight’ for ESPN's ‘SportsCenter’, Scott replaced him as the anchor of the show.
Besides hosting, he also became one of the top field reporters for ESPN’s sports programme.
In 1995, he covered for ESPN Major League Baseball’s (MLB) playoffs and the National Collegiate Athletic Association’s (NCAA) Final Four basketball tournament.
In 1997-1998, he covered the National Basketball Association’s (NBA) Finals and directly interviewed the well-known basketball player, Michael Jordan.
He was seen in the 1997 season of ‘NFL Primetime’ a Sunday night National Football League highlight show. Starting 1997, he also began covering the finals of NFL and continued to do so till 2014.
Continue Reading Below
He served as a co-host of Sunday NFL Countdown from 1999–2001. During this time, he also became the anchor for ‘SportsCenter’ where he worked with other important fellow sportscaster and sports journalist like Steve Levy, Kenny Mayne, Dan Patrick and Rich Eisen.
Beginning 1997 and up till 2013, he consistently appeared in ‘This is SportsCenter’ commercials too.
When the Monday Night Football moved from ABC to ESPN, Scott presented its ‘Monday Night Countdown’ and post-game SportsCenter coverage.
In 2002, he was given the responsibilities of studio host for NBA on ESPN and in 2008, he assumed the same responsibilities for ABC’s NBA coverage, which included the NBA Finals.
Stuart Scott became popular for his usage of catch phrases, some of the most famous ones being ‘Boo-yah!’, ‘Hallah’, ‘He must be the bus driver cuz he was takin' him to school’, ‘Just call him butter 'cause he's on a roll’ and ‘It's your world, kid ... The rest of us are still paying rent’.
Scott regularly wrote the Holla Column for ‘ESPN the Magazine’. He anchored numerous games and reality show for ESPN like ‘Stump the Schwab’, ‘Teammates’, and ‘Dream Job’. He also presented David Blaine's ‘Drowned Alive’ special and another special – ‘AFV: The Sports Edition’ - for ‘America's Funniest Home Videos’.
He co-authored his memoir ‘Every Day I Fight’ along with Larry Platt. The book came out in March 2015.
He has worked in quite a few films and television series and also made an appearance in a music video by rappers LL Cool J and Luke.
Some of his film credits include ‘He Got Game’ (1998), ‘The Kid’ (2000), ‘Drumline’ (2002), ‘Herbie: Fully Loaded’ (2005), ‘The Game Plan’ (2007) and ‘Just Wright’ (2010).
Continue Reading Below
His television appearances include ‘Arli$$’ (2000), ‘I Love the '70s’ (2003), ‘Dream Job’ (2004), ‘I Love the Holidays’ (2005), ‘I Love Toys’ (2006) and ‘Black to the Future’ (2009).
Major Works
Stuart Scott worked for ESPN for more than two decades and became one of its most recognized faces appearing in a variety of sports programme. He most notably anchored ESPN’s flagship daily sports news television program ‘SportsCenter’. He also covered NBA and NFL for ESPN.
Though there were a number of other African-American sportscasters before him, his style of blending hip hop culture with sports was unique. He also included references from pop culture into his work. He appealed to the younger fans, especially young Afro American.
As a consequence of his colour and unique style, he attracted plethora of hate mails; however, he continued doing work his way and ESPN supported him. He turned into an idol for Afro American sports journalists.
Awards & Achievements
In July 2014, he was given ‘Jimmy V Award for Perseverance’ at the ‘ESPY Awards’, for his fight against cancer. In his acceptance speech, he said, “When you die, it does not mean that you lose to cancer. You beat cancer by how you live, why you live, and in the manner in which you live.”
Family & Personal Life
Stuart Scott married Kimberly in 1993 and the couple had two daughters, Taelor and Sydni. The marriage lasted till 2007. He was later in relationship with Kristin Spodobalski.
In 2002, while shooting for an ESPN show, he was hit in the face by a football which consequentially damaged his cornea and eventually led to ptosis (falling of upper eyelid).
In 2007, he was diagnosed with appendicitis. He had his appendix removed; however further examination revealed cancer. As part of treatment, he underwent surgery and chemotherapy.
In 2011 and then again in 2013, his cancer returned and he had to undergo numerous surgeries, chemotherapy sessions and had to take chemotherapy pills.
He breathed his last, at the age of 49, in January 2015 at his home in Avon, Connecticut. Tributes poured in from all corners and moments of silence were held at sporting events world over.
You May Like

See the events in life of Stuart Scott in Chronological Order 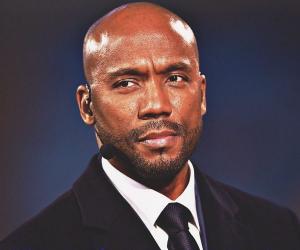