Sophie Fergi, popularly known as the Goth Girl, is an American child actor and YouTuber who grew famous after appearing in the comedy web TV series ‘Mani’. She was selected to play the role of the Goth Girl on the series, and Fergi starred alongside other famous young actors such as Piper Rockelle and Hayley LeBlanc. The show was a huge hit among its audience, and Fergi’s character gained popularity with each of its episode. After ‘Mani’, Sophie went on to star in ‘God’s Gracie’ and ‘Creepy Toys Girls’. She also starred as herself on ‘Piperazzi’ and ‘TinaQ’s Celebrity Interviews’. After finding her feet in front of the camera, Sophie decided that she wanted to start a YouTube channel as well for her fans to get a glimpse of her life behind the scenes. So far, even with the handful of videos posted by Sophie, they’ve accumulated over 2 million views overall and she currently has around 150,000 subscribers. Apart from YouTube and TV, she is also a popular figure on Instagram, where she frequently uploads photographs from her life. Currently, she has over 300,000 followers and has collaborated with several fashion brands at a young age. In the future, she hopes to make it big in Hollywood and establish herself as a professional actor. August Maturo
DID WE MISS SOMEONE?
CLICK HERE AND TELL US
WE'LL MAKE SURE
THEY'RE HERE A.S.A.P
Quick Facts

American People
Female Child Actors
American Child Actors
American Female Child Actors
Female Film & Theater Personalities
Rise to Fame
When she was just three years old, Sophie Fergi made her first appearance as a young guest actor in the short film ‘Away We Stay’. This instilled in her a love for acting and the camera. When she turned ten, she was encouraged by her mother’s friend to start working as a background actor in order to find a major role. Sophie did exactly that and was soon seen as an extra in the popular TV series ‘Mani’. Soon enough, she was picked to play a recurring role in the second season of the comedy web TV series in 2017. This role brought her fame and popularity. The series starred Piper Rockelle and Hayley LeBlanc in the lead roles, whereas Sophie played the supporting character of Goth Girl/G Baby in twenty episodes. She shared screen space with Lawrence Wayne Curry, Julian Clark, Bryson Robinson, and Coco Quinn. The series aired on Brat Network was a huge hit, and Sophie turned into a young star with its release.
Apart from appearing on ‘Mani’, Sophie has several other acting credits to her name. In the TV series ‘Creepy Toys Girls’, she appeared in the episodes ‘Flush It’ and ‘PS – That’s Some BS’. She was later seen in the short film ‘God’s Gracie’ in a minor role in 2018. Sophie has also appeared as herself on the TV series ‘Piperazzi’ in two episodes: ‘A Voodoo Situation’ and ‘Piper Rockelle Has Landed’. Later, she also made an appearance in ‘TinaQ’s Celebrity Interviews’ in the ‘Sage Alexander Launch Party’ episode.
Sophie Fergi started her eponymous YouTube channel on October 9, 2018. Her intention behind starting the channel was to upload vlogs and several other fun videos along with Piper Rockelle, her co-star and best friend. She also wanted her fans to get a glimpse of her life behind the camera and inspire several girls across the world to follow their dreams. Her most popular videos on the channel are ‘WHO KNOWS ME BETTER?! Piper Rockelle vs Gavin Magnus *CHALLENGE* | Sophie Fergi’ with over 650,000 views and ‘My Best Friends REACT to my CAMERA ROLL *EXPOSED* (w/ Piper Rockelle, Gavin Magnus) | Sophie Fergi’ with over 350,000 views. Relatively new to the medium, Sophie already has a considerable fan following on YouTube. She has an overall subscriber count of over 150,000 and has touched 2 million views across her videos.
She also has her own Instagram account where she often posts photographs of her everyday life along with her friends, family, and other social media personalities. She is often seen representing various up and coming fashion brands, too. She currently has a follower count of over 370,000. Sophie currently lives in Hollywood and hopes to become a professional actor in the future. She is wholeheartedly supported by her mother and uncle who are constantly featured on her social media channels.
You May Like

American Film & Theater Personalities
American Female Film & Theater Personalities
Cancer Female
Continue Reading Below
Family & Personal Life
Sophie Fergi was born on July 4, 2007 in Los Angeles, California. Her mother, Heather Nicole, is her general manager and manages her social media accounts as well. She is also close to her uncle, Adam Trimmer, who helps her understand the world of social media and acting. In her spare time, Sophie loves dressing up, playing sports, and watching movies. She also loves writing stories, screenplays, and illustrating.
Trivia
Before receiving a big role on TV, Sophie was seen in a background role in the popular series ‘Arrested Development’ in the episode titled ‘Premature Independence’. 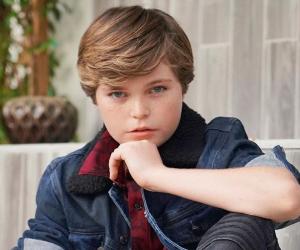