(Rapper Best Known as a Member of the 'Doug E. Fresh & the Get Fresh' Crew)

Slick Rick, also known as Rick the Ruler and Ricky Dee is a critically acclaimed rapper who rose to fame with hits like ‘La Di Da Di’ and ‘Children’s Story’. He rose to stardom during the 1980s, an era known to the fans of hip hop as the Golden age of hip hop. Born as Richard Walters, this musician is famous for his use of narrative and has rightfully been dubbed “hip hop’s greatest storyteller”. With his rough looks and history of brushes with the law, he epitomized the rowdy attitude associated with rappers of his time. As a child he had lost the vision in one eye and started wearing an eye-patch which eventually became his trademark. He had forayed into the world of hip hop as a teenager hen he formed the Kangol Crew with Dana Dane and began performing in hip-hop battles around the city. He later joined Doug E. Fresh and played with his crew. His acquaintance with Fresh made him popular and paved the way for his solo career. His debut album, ‘he Great Adventures of Slick Rick’ which spawned the tracks ‘Teenage Love’ and ‘Children’s Story’ was a No.1 hit on the Billboard chart. The brilliant rapper’s career however has been marred by frequent brushes with the law. American People
Black Rappers
Black Singers
Black Musicians
Hip Hop Singers
Childhood & Early Life
He was born to Jamaican parents in London. He was blinded in his right eye by broken glass when he was a child and has been wearing an eye-patch ever since.
He went to the La Guardia High School of Music & Art during the late 1970s and met the aspiring musician Dana Dane there. The two young boys formed a hip hop duo called the Kangol Crew. 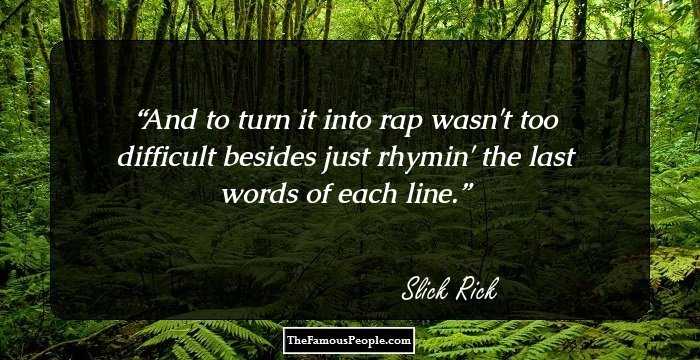 Continue Reading Below
Career
He met Doug E. Fresh in 1984 and joined his Get Fresh Crew. He played using the stage name MC Ricky D and was featured on the single, ‘The Show’ and track, ‘La Di Da Di’.
In 1988 he decided to go solo and released his album, ‘The Great Adventures of Slick Rick’. The album had the singles ‘Children’s Story’ and ‘Teenage Love’ and reached the No.1 spot on Billboard’s R&B/Hip Hop chart.
He played himself in the 1988 film ‘Tougher Than Leather’ which featured the hip hop group Run-D.M.C. The film was released to coincide with the group’s album of the same name.
In 1990 he shot two people and was indicted on two counts of attempted murder and sentenced to five years in prison. He released his second album while he was out on bail.
His album, ‘The Ruler’s Back’ was out in 1991. It featured songs by Vance Wright and Mr.Lee along with Rick. The single, ‘I Shouldn’t Have Done It’ peaked at No.2 on the Hot Rap Singles.
In 1994 while still in jail he released the album, the aptly titled, ‘Behind Bars’. This too featured productions from Vance Wright and others like Prince Paul, Large Professor, Easy Mo Bee and Warren G. It was a moderate success.
His fourth and so far the most recent album was ‘The Art of Storytelling’ which was released in 1999. DJ Clark Kent and Kid Capri had contributed to the album production. It was his highest charting album which peaked at No. 8 on the Billboard 200.
He contributed to the lyrics of the single ‘Girls, Girls, Girls’, from rapper Jay-Z’s album ‘The Blueprint’ in 2001. The song describes the artists’ promiscuous lifestyle in a playful manner.
He was arrested in 2001 by the Immigration and Naturalization Service (INS) after he performed on a Caribbean cruise ship and re-entered The U.S. He was jailed for 17 months and released in 2003.
Continue Reading Below
His rapping style has been critically praised by music critics. He is best known for his narrative style and structure which distinguishes him from other rappers. He has the ability to use little sonic details to his advantage to cerate unique hip hop sounds.
In 2011 he was featured in the film ‘Rhyme and Punishment’ which documented his life in prison. The film depicted how crime and violence has always been an integral influence on rap music and hip hop. 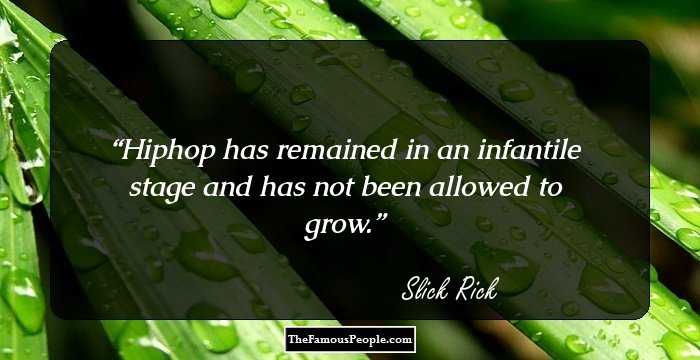 Major Works
His debut album, ‘The Great Adventures of Slick Rick’ was platinum certified and selected as one of ‘The Source’s 100 Best Rap Albums. It had topped the Billboard's Top R&B/Hip Hop Albums chart for five nonconsecutive weeks.
His most recent album, ‘The Art of Storytelling’ was his comeback album after his jail stint for an attempted murder. It proved to be his highest charting album so far and was certified gold within weeks of its release.
Awards & Achievements
He was honoured on the VH1 Hip Hop Honors show in 2008. 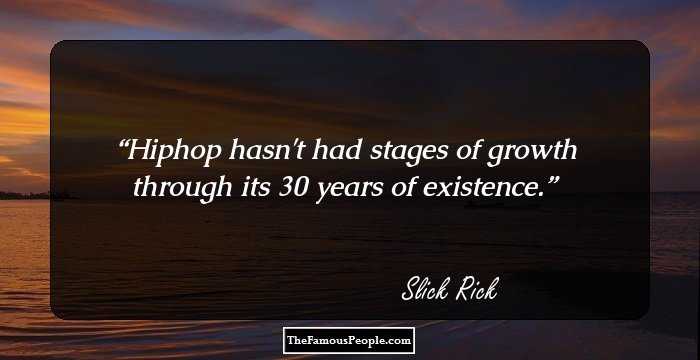 Personal Life & Legacy
During his initial years he was well-known for his flamboyant dressing style. He used to wear a lot of gold chains and also wore gold and diamonds on his eye-patch and teeth. With time, mellowed down his style.
His best known songs like ‘La Di Da Di’ and ‘Children’s Story’ have often been covered by various other artists like Snoop Dogg and Notorious B.I.G.
He married Mandy Aragones in 1996. The couple has two children.
Recommended Lists:
Musicians #2530
Singers #1630

See the events in life of Slick Rick in Chronological Order