Advanced Search
Sir Ian Murray McKellen is an acclaimed British thespian and respected film actor. He is well-known for his roles as ‘Magneto’ and ‘Gandalf’ in the ‘X-Men’ and ‘The Lord of the Rings’ film series, respectively. He has worked in a number of projects ranging from Shakespearean and modern theatre, to popular fantasy and science fiction films. He has acted in several ‘X-Men’ movies and in the film adaptation of one of the best-selling books ‘The Da Vinci Code.’ For his work in the ‘Lord of the Rings’ film series, he received the ‘Screen Actors Guild Award’ for ‘Best Supporting Actor,’ and an ‘Academy Award’ nomination. McKellen was appointed Commander of the Order of the British Empire, and was made a Companion of Honour for his services to drama. He was also knighted for his services to performing arts. He made his sexual orientation known to his fellow actors early in his stage career, and came out publicly in a program on ‘BBC Radio 3.’ He is the co-founder of ‘Stonewall,’ a LGBT rights lobby group in the United Kingdom. British People
Gemini Actors
British Actors
Actors Who Are In Their 80s
British Film & Theater Personalities
Childhood & Early Life
He was born on 25 May 1939, in Burnley, Lancashire, England, to Denis Murray, a civil engineer, and Margery Lois. He had an older sister named Jean who was five years older to him.
Just before the outbreak of the ‘Second World War’ in September 1939, his family moved to Wigan. They lived there through the war and his early childhood, and then moved to Bolton.
He attended the nursery school attached to ‘Dicconson Street Wesleyan Primary School.’ He then went to ‘Wigan Grammar School for Boys,’ and was later transferred to ‘Bolton School.’
McKellen's acting career started at ‘Bolton Little Theatre,’ of which he is now a patron. His parents allowed his interest in theatre to blossom by taking him to watch ‘Peter Pan’ at the ‘Opera House.’
When he was 18 years old, he won a scholarship to ‘St. Catharine's College,’ Cambridge, where he studied English literature. There, he was actively involved with the in-house theatre and also acted in plays. 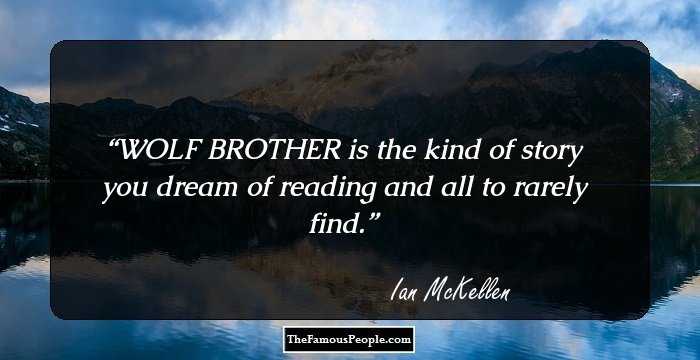 Quotes: You
Continue Reading Below
Career
His first professional appearance came in 1961 when he played ‘Roper’ in ‘A Man for All Seasons’ at the ‘Belgrade Theatre Coventry.’ Earlier, an audio recording of Marlowe Society's ‘Cymbeline’ had gone on commercial sale.
In 1964, he made his first West end appearance in ‘A Scent of Flowers’ at regional repertory theatres. This play received favorable reviews.
In 1965, he was a member of Laurence Olivier's ‘National Theatre Company’ at Old Vic. This membership led to roles at the ‘Chichester Festival,’ which includes productions of classics to contemporary writing and musicals.
Between 1970 and 1990, he became a well-known figure in British theatre, performing at the ‘Royal Shakespeare Company’ and ‘Royal National Theatre.’ He played leading roles in several popular plays.
In 1993, he played a South African tycoon in ‘Six Degrees of Separation.’ The same year, his role in the television movie ‘And the Band Played On’ earned him an ‘Emmy’ nomination.
The 1998 film ‘Gods and Monsters,’ in which McKellen played the lead role, was based on the homosexuality of film director James Whale. The storyline was close to his heart.
He played the super villain ‘Magneto’ in the film ‘X-Men’ which was directed by Bryan Singer in 2000. He reprised his role as ‘Magneto’ in the film’s sequels ‘X2’ (2003), ‘X-Men: The Last Stand’ (2006), and ‘X-Men: Days of Future Past’ (2014).
McKellen was cast as ‘Wizard Gandalf’ in Peter Jackson’s ‘The Lord of the Rings’ movie series. It was an adaptation of a novel of the same name by J. R. R. Tolkien.
His life-long ambition was to act in a soap opera. His ambition was realized when he got the opportunity to act in Granada Television’s ‘Coronation Street’ in 2005 where he played the role of ‘Mel Hutchwright.’
Continue Reading Below
In 2009, he appeared in a very popular revival of ‘Waiting for Godot’ at London's ‘Haymarket Theatre.’ This was directed by Sean Mathias, and McKellen played a role opposite Patrick Stewart.
The British television sitcom ‘Vicious,’ where he played ‘Freddie Thornhill,’ was aired from 2013 to 2016. The series received generally positive reviews. In 2016, the series' ‘Finale Special’ was broadcast in the United States.
In 2018, he played ‘Earl of Southampton’ in the British fictional historical film ‘All Is True.’ The following year, he played ‘Roy Courtnay’ and ‘Gus the Theatre Cat’ in ‘The Good Liar’ and ‘Cats’ respectively.
Major Works
In 2000, he starred in the first of several ‘X-Men’ movies. His role ‘Magneto’ received worldwide acclaim. The ‘X-Men’ film series went on to achieve worldwide popularity.
He was cast as ‘Gandalf’ in ‘The Lord of the Rings’ film series. The ‘Best Supporting Actor’ award was bestowed upon him at the ‘Screen Actors Guild Awards’ for his performance as ‘Gandalf.’ He also received an ‘Academy Award’ nomination.
In August 2012, McKellen took part in the opening ceremony of the ‘London Paralympics.’ He portrayed the role of ‘Prospero’ from ‘The Tempest.’
Awards & Achievements
In 1991, McKellen was knighted by the Queen for his services to performing arts. Subsequently, he succeeded Stephen Sondheim as Professor of Contemporary Theatre at ‘Oxford University.’
He was honored with six ‘Olivier Awards.’ His portrayal of ‘Max’ in Sherman's enthralling play ‘Bent’ earned him the ‘Actor of the Year’ award.
In 1996, he received the ‘Golden Globe Award’ for his portrayal of ‘Nicholas II’ in ‘Rasputin: Dark Servant of Destiny.’ He received the award under ‘Best Performance by an Actor in a Supporting Role’ category.
Personal Life & Legacy
He is openly gay and his first serious relationship was with Brian Taylor, a history teacher from Bolton. They lived in London and their relationship started in 1964 and lasted eight years.
In 1978, he met his second partner Sean Mathias at the Edinburgh festival. Their turbulent relationship lasted ten years before they decided to separate.
McKellen is a patron of ‘English Touring Theatre.’ He also serves as president and patron of the ‘Little Theatre Guild of Great Britain,’ an association of amateur theatre organizations in the UK.
He was diagnosed with prostate cancer in 2006. In 2012, he stated that he’s being examined regularly and that the cancer is contained. He also said that he has not required any treatment.
In 2014, he received honorary Doctorate of Letters from the ‘University of Cambridge.’
Trivia
This British actor has been a Cricket fan since childhood. In 2011, he umpired a charity match in New Zealand.
He became an ordained minister of the ‘Universal Life Church’ in order to preside over the wedding ceremony of Patrick Stewart and Sunny Ozell in 2013.

See the events in life of Ian McKellen in Chronological Order