Advanced Search
Shigeru Miyamoto is a famous Japanese video game designer and producer. He is considered as one of the pioneers of the video game industry, and often regarded as the “father of modern video gaming”. His extremely successful career spanning over four decades started in 1977 when he joined Nintendo as an artist. His unique style of developing a storyline with characters first thus bringing in a creative aspect instead of just designing a game focussing on the programming and technical aspects like other video game designers, made him develop some of the most all-time popular and best-selling video games and franchises. His big break came when he created ‘Donkey Kong’ a video game that not only soared his fame, introducing his signature character ‘Mario’, but also brought a new wave in the video game industry. In the era of Asteroids and Pac-Man, the game emerged among the best-sellers of early 1980s. It paved way for an array of other popular video games and franchises developed by this video gaming marvel including ‘Mario’, ‘Star Fox’, F-Zero’, ‘The Legend of Zelda’ and ‘Pikmin’. With time his responsibilities and position in company increased that saw him receiving several promotions over the years. At present he serves as the co-Representative Director of ‘Nintendo’. Yusaku Maezawa
DID WE MISS SOMEONE?
CLICK HERE AND TELL US
WE'LL MAKE SURE
THEY'RE HERE A.S.A.P
Quick Facts

Japanese People
Computer Scientists
Japanese Men
Male Scientists
Japanese Artists
Childhood & Early Life
Shigeru Miyamoto was born on November 16, 1952, in the rural town of Sonobe, located northwest of Kyoto in Japan, to Iijake Miyamoto and Hinako Aruha as their second child.
Little Miyamoto developed a knack for doodling and many a times his studies would take a back seat to this hobby.
He also remained close to nature and would explore natural surroundings in the countryside of Kyoto. Such expeditions including discovering caves and water bodies later motivated him in crafting many of his popular video games, most prominently ‘The Legend of Zelda’.
He started attending ‘Kanazawa Municipal College of Industrial Arts’ in 1970 and five years later he graduated obtaining a degree in industrial design.
Prior to embarking on a career in video games, Miyamoto even contemplated a career as magna artist due to his sheer love for the subject.
Continue Reading Below
Career
After obtaining his degree in industrial design, Miyamoto, had an interview with Hiroshi Yamauchi, president of ‘Nintendo’, a Japanese company selling playing cards, toys, games and other novelties. Impressed by the toys created by Miyamoto, Yamauchi inducted him into the planning department of the company as an apprentice in 1977.
Eventually, he became the first artist of ‘Nintendo’ and in 1979 he aided in developing the art of ‘Sheriff’, an arcade video game developed by Nintendo R&D1.
The first game that he helped develop was the cabinet arcade game ‘Radar Scope’ published in December 1979 in Japan and in November 1980 worldwide. The game although thrived moderately in Japan, its overall commercial failure left ‘Nintendo’ on the brim of huge financial catastrophe.
Under such circumstances, he was designated by Yamauchi to transform unsold units of ‘Radar Scope’, large in number, into an entirely new arcade game. This marked development of ‘Donkey Kong’, an early instance of the platform game genre released by ‘Nintendo’ on April 22, 1981.
While conceiving ‘Donkey Kong’, Miyamoto concentrated on formulating a story line first before focussing on technical and programming aspects marking first such instance in development of video game.
The monumental success of ‘Donkey Kong’ paved way for Miyamoto to work on two of its sequels ‘Donkey Kong Jr.’ (1982) and ‘Donkey Kong 3’ (1983).
Moving ahead, he created a platform game, ‘Mario Bros.’, based on the character of Jumpman from ‘Donkey Kong’ who he remodelled as Mario giving the character some superhuman skills. He added the character of Luigi, Mario’s brother in the game.
‘Mario Bros.’ is featured in the ‘Super Mario Advance’ series as a mini-game releasing for the first time in 1983. The game garnered modest success and re-released in several platforms over the years.
Next, he created a sequel to ‘Mario Bros.’ titled ‘Super Mario Bros.’, which remains one of his most remarkable creations. It was released in 1985 in Japan and North America and after a couple years in Australia and Europe.
Continue Reading Below
The monumental success of ‘Super Mario Bros.’ led to development of a series of sequels over the years and an extended franchise comprising an anime film, ‘Super Mario Bros: The Great Mission to Rescue Princess Peach!’ (1986), a TV series, ‘The Super Mario Bros Super Show’ (1989), and a big-screen flick, ‘Super Mario Bros’ (1993).
On February 21, 1986, ‘Nintendo’ released ‘The Legend of Zelda’, yet another phenomenal creation of Miyamoto designed along with Takashi Tezuka. The action-adventure video game emerged as a best-seller for ‘Nintendo’ selling over 6.5 million copies.
‘The Legend of Zelda’ often included in the list of greatest and influential games, led to the development of the expanded ‘Legend of Zelda’ series that has over years garnered acclaim both from the critics and the public.
As his responsibilities in ‘Nintendo’ increased, Miyamoto started heading ‘Nintendo Entertainment Analysis & Development’
He worked on the rail shooter video game ‘Star Fox’ (1993) that became the second three-dimensional video game developed by ‘Nintendo’. Its success again led to the development of the ‘Star Fox’ franchise including sequels, spin-offs, and several media adaptations.
Other notable video games and series that Miyamoto worked on include ‘Metroid Prime’, ‘Pikmin’ and ‘F-Zero’.
He became the first video game developer to be inducted in the ‘Hall of Fame’ of the ‘Academy of Interactive Arts and Sciences' in 1997.
He remained instrumental in developing Nintendo’s home video game console ‘Wii’ that released on November 19, 2006. That year French Minister of Culture, Renaud Donnedieu de Vabres, honoured him as a Chevalier (knight) of the French Ordre des Arts et des Lettres.
He alongside Genyo Takeda was inducted as an acting Representative Director of ‘Nintendo’ after its president Satoru Iwata died in July 2015. He held the position till September 2015. During that time he was also formally appointed as "Creative Fellow" of the company.
Major Works
Donkey Kong became a huge success garnering immense popularity in the US and Canada and became the top seller of ‘Nintendo’ in summer 1983. It received the ‘Best Solitaire Videogame’ award at the 1983 Arcade Awards (1982).
‘Super Mario Bros.’ was published for the 8-bit home video game console, developed by ‘Nintendo’ in 1983 referred as ‘Nintendo Entertainment System’. The game not only garnered critical acclaim but also thrived in retaining the feat as the all-time best-selling single platform game for around 3 decades.
An IGN poll conducted in 2005 named ‘Super Mario Bros.’ as the "greatest game of all time". It also helped in reviving the crashed video game market of America in the 1980s.
Personal Life & Legacy
Miyamoto is married to Yasuko and blessed with a son and a daughter.
He likes to play banjo, guitar and mandolin during free time. He is a semi-professional dog breeder and his Shetland Sheepdog Pikku has remained inspiration for Nintendogs.

See the events in life of Shigeru Miyamoto in Chronological Order 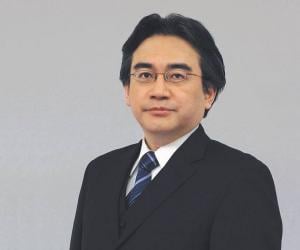