(Famous for Her Role in the Movies 'Basic Instinct' and 'Casino")

Sharon Stone is an American actress, former fashion model, and producer. She is one of Hollywood’s most famous actresses, best known for her riveting performance in films like ‘Basic Instinct,’ ‘Casino,’ ‘The Mighty,’ and ‘The Muse.’ This ‘Golden Globe’ award-winning actress has starred opposite several leading men of Hollywood. At the peak of her career, she was one of Hollywood’s most sought after actresses. After winning beauty pageants in Pennsylvania, she moved out of her home and went to New Jersey in order to pursue her childhood dream of becoming the next Marilyn Monroe. Soon, she signed up with ‘Ford Modeling Agency’ in New York. Stone was not content being a model as this middle class girl, who was born to working-class parents, had bigger dreams. After a brief stint in modeling, this ambitious lady began her film career at the age of 22 when she was cast as an extra in Woody Allen’s film ‘Stardust Memories.’ After an initial struggle period, Stone gained fame and adulation for her performance in the film ‘Basic Instinct.’ Soon, she became one of the most adored divas in the entertainment industry. After establishing herself as a bankable actress, she went on to play prominent roles in TV series like ‘War and Remembrance’ and ‘If These Walls Could Talk 2.’ She has also made guest appearances in series like ‘The Practice’ and ‘Law & Order: Special Victims Unit.’ American People
Actresses
American Women
Pennsylvania Actresses
Pisces Models
Childhood & Early Life
Sharon Vonne Stone was born on 10 March 1958, in Meadville, Pennsylvania, USA, to Joseph William Stone II and Dorothy. While her father worked in the tool and die manufacturing industry, her mother was a housewife and accountant. She has two brothers and a sister.
In 1975, she graduated from ‘Saegertown High School’ in Saegertown, Pennsylvania. She also participated in the Miss Pennsylvania beauty pageant and won the ‘Miss Crawford County’ title.
In 1977, she moved to New Jersey in order to pursue a career in the field of modeling. Subsequently, she signed up with ‘Ford Modeling Agency’ in New York. 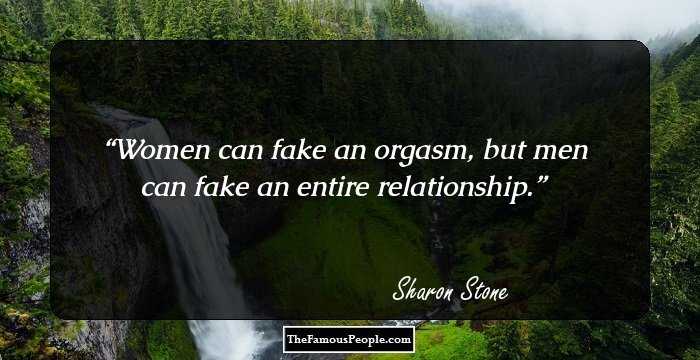 Quotes: Relationship, Women
Continue Reading Below
Career
In 1980, she appeared as an extra in Woody Allen’s film ‘Stardust Memories,’ which received negative reviews. The film even failed to impress Woody Allen’s fans.
In 1981, she played the role of ‘Lana Marcus’ in the horror film ‘Deadly Blessing,’ which was directed by Wes Craven. The film did not receive positive reviews from the critics.
In 1984, she was seen in the American TV series ‘The New Mike Hammer,’ a mystery-drama. The series received low ratings.
In September 1984, she played the role of ‘Blake Chandler’ in a comedy-drama film titled ‘Irreconcilable Differences.’ The film was directed by Charles Shyer and received ‘Golden Globe’ nominations.
In 1988, she starred in the action film ‘Above the Law,’ which was directed by Andrew Davis. The movie, which was filmed in Chicago, mostly received positive reviews.
In 1989, she was seen in the drama film ‘Beyond the Stars,’ which was directed by David Saperstein. The film revolves around a teenage boy whose father is a computer scientist.
In 1990, she starred opposite Arnold Schwarzenegger in the ‘Academy’ award-winning science fiction film ‘Total Recall.’ The film was a blockbuster hit.
In 1992, she starred in the erotic thriller film ‘Basic Instinct,’ which was directed by Paul Verhoeven. In the film, she played the role of ‘Catherine Tramell,’ a crime novelist and alleged serial killer. The film was a huge hit.
In 1995, she played the role of ‘Ginger McKenna’ in the ‘Academy’ award-nominated and ‘Golden Globe’ award-winning Martin Scorsese’s crime-drama film ‘Casino.’
Continue Reading Below
In 1999, she earned a ‘Golden Globe’ nomination for her role as ‘Sarah Little’ in the comedy film ‘The Muse,’ which was directed by Albert Brooks. The film did not do well at the box office.
In 2000, she starred in the ‘Emmy’ award-winning TV film ‘If These Walls Could Talk 2,’ which was broadcast on HBO. The film revolves around the lives of lesbian couples.
In 2003, she was seen in the ‘Emmy’ award-winning television drama ‘The Practice,’ which was created by David E. Kelley. The plot of the series revolves around a law firm.
In 2005, she appeared as ‘Dr. Georgia Keller’ in the television sitcom ‘Will & Grace.’ The series was based on the relationship between two characters, ‘William Truman’ and ‘Grace Adler.’
In 2006, she reprised her role as ‘Catherine Tramell’ in the film ‘Basic Instinct 2,’ which served as a sequel to the 1992 film ‘Basic Instinct.’ The film was slammed by the critics.
In 2009, she played the role of ‘Nina Ferraro’ in the action-drama film ‘Streets of Blood,’ which was directed by Charles Winkler. The film was based on a story written by Hess and Dennis Fanning.
In 2010, she appeared as ‘Jo Marlowe’ in four episodes of the television crime drama series ‘Law & Order: Special Victims Unit.’ The series was set in and around New York City.
In January 2013, she played the role of ‘Dorothy Boreman’ in the American biographical film ‘Lovelace.’ The film was based on the life of pornographic actress Linda Susan Boreman, better known as Linda Lovelace.
She then starred alongside Woody Allen and Sofía Vergara in the 2013 comedy film ‘Fading Gigolo.’ Three years later, she joined the ensemble cast of the independent drama film ‘Mothers and Daughters.’
Continue Reading Below
She played a leading role in the 2017 romantic comedy film ‘All I Wish,’ which was directed by Susan Walter. The same year, she was also seen in movies like ‘Running Wild’ and ‘The Disaster Artist.’
The versatile actress was seen alongside other industry veterans like Meryl Streep and Gary Oldman in the 2019 biographical comedy film ‘The Laundromat.’ Over the years, she has also had recurring roles in TV series like ‘Agent X,’ ‘Mosaic,’ and ‘Better Things.’ 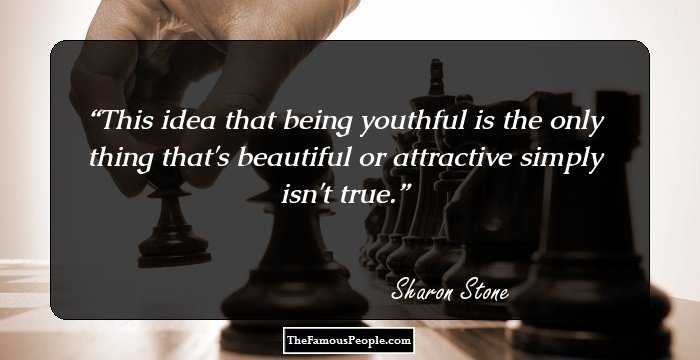 Quotes: Beautiful
Major Works
In 1992, she starred in the film ‘Basic Instinct,’ which was one of the most commercially successful films of the decade. The film earned a whopping $352 million across the world.
She was seen in the film ‘Casino,’ which earned $116.11 million at the box office. The film was also mentioned in the American Film Institute’s list of ‘top ten gangster films.’
Awards & Achievements
In 1996, she became the recipient of the prestigious ‘Golden Globe Award’ for ‘Best Performance by an Actress in a Motion Picture – Drama’ for the film ‘Casino.’ 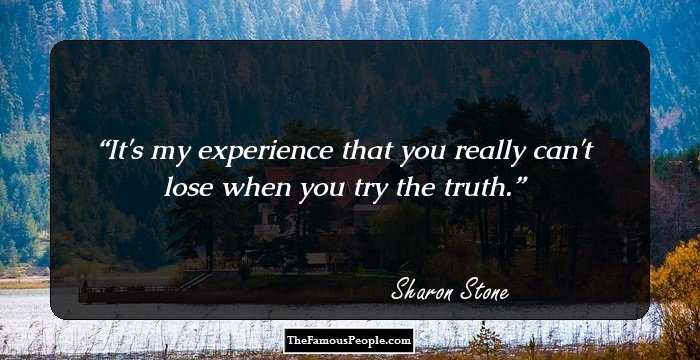 Quotes: You, Experience
Personal Life & Legacy
In 1984, she married TV producer Michael Greenburg. The marriage ended in divorce in the year 1990.
In 1993, she became romantically involved with writer and producer William J. MacDonald. The couple got engaged but the engagement was called off in 1994.
In 1998, she married journalist and editor Phil Bronstein. Together, they adopted a son named Roan Joseph Bronstein. Sharon and Phil divorced in 2004. She has two other adopted children, Laird Vonne Stone and Quinn Kelly Stone.
Trivia
The famous gold and white dress, which this ‘Golden Globe’ award-winning American actress wore in the film ‘Casino,’ weighed over 45 pounds!

Quotes By Sharon Stone | Quote Of The Day | Top 100 Quotes

See the events in life of Sharon Stone in Chronological Order