Seth Green is a film and television actor who co-created the animated television comedy series ‘Robot Chicken’. He is well-known for his role as Daniel Osbourne in the television series ‘Buffy the Vampire Slayer’. He started out as a child artist at the tender age of six; an uncle in the casting business helped to introduce the youngster to acting. One of his early television appearances was as a little boy in an episode of the sketch comedy show ‘Saturday Night Live’. He made his film debut in a supporting role in the comedy drama ‘The Hotel New Hampshire’ as a ten-year-old. One thing led to another and soon he was making numerous minor appearances in television shows and films. He also started developing himself as a voice actor. In spite of his television and film roles, it was actually a role in a commercial that made him really popular. Exposed to the world of show business at a young age, he soon graduated from an actor to become a successful producer cum director. He co-created the animated series ‘Robot Chicken’ along with Matthew Senreich and also voiced several of its characters. The series became highly popular and won many awards and accolades. American People
T V & Movie Producers
American Men
Pennsylvania Actors
Aquarius Actors
Childhood & Early Life
Seth Green is the son of an artist mother, Barbara and a teacher father, Herbert Green. He belongs to a Jewish family and has one sister.
His uncle was a casting director and he helped to launch the acting career of young Seth when he was just six years old.
As a child artist, he appeared in a number of commercials for various companies like Kodak and Burger King. 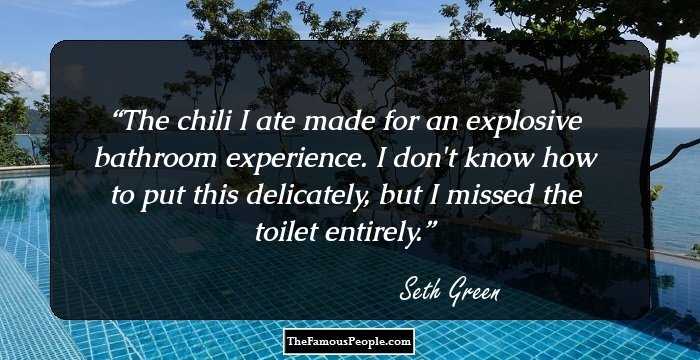 Quotes: Experience, I
Continue Reading Below
Career
One of his first film roles was in ‘The Hotel New Hampshire’ in 1984 in which he starred along with Jodie Foster and Rob Lowe. He played a supporting role in the comedy drama.
He auditioned for the role of Young Joe in the Woody Allen movie ‘Radio Days’ and bagged it. The 1987 film received very positive reviews and won several awards.
The success of ‘Radio Days’ ensured that the boy got several film offers over the next few years including: ‘Big Business’ (1988), ‘My Stepmother Is an Alien’ (1988), and ‘Pump Up the Volume’ (1990).
He played the role of Young Richie Tozier in the film adaptation of Stephen King’s horror novel ‘It’ (1990). The performances of the young actors were appreciated though the film itself received mixed reviews.
The 1990s were very productive for the young actor and he had acted in around 15 films over the decade. The major ones among them were: ‘Arcade’ (1993), ‘White Man’s Burden’ (1995), ‘Boys Life 2’ (1997), and ‘Idle Hands’ (1999).
Even after making the transition to movies, Seth continued appearing on television. In 1997, he got the chance to star as Daniel “Oz” Osbourne in the television series ‘Buffy the Vampire Slayer’. The series ran for seven seasons till 2003.
He lent his voice to the characters of Chris Griffin, Neil Goldman and others in the animated sitcom ‘Family Guy’ that centers on a dysfunctional family called the Griffins. The series originally ran from 1999 to 2003. The series was later revived in 2005 because of its popularity.
He lent his voice to six episodes of ‘Batman Beyond’ between 1999 and 2001.
He starred in the television sitcom ‘Greg the Bunny’ as Jimmy Bender, the human roommate of Greg the Bunny, a hand puppet. The show premiered in 2002 and ran till 2006.
Continue Reading Below
In 2005, he created an animated comedy series ‘Robot Chicken’ along with Matthew Senreich and also provided voices for several characters in the series. The show makes fun of pop culture, movies, television, fashion fads, etc.
He directed ‘Robot Chicken: Star Wars’, a one-off special episode of the comedy series ‘Robot Chicken’ that was aired on Cartoon Network in 2008. Two sequels ‘Robot Chicken: Star Wars Episode II’ (2008) and ‘Robot Chicken: Star Wars Episode III’ (2010) were later made.
He directed and voiced several characters in ‘Robot Chicken DC Comics Special’, a one-off special episode of the ‘Robot Chicken’ series that was aired in September 2012. 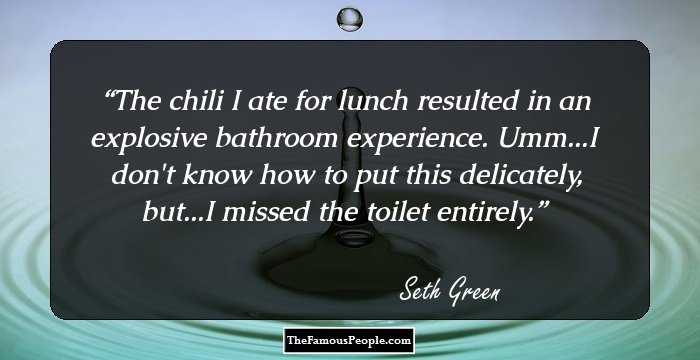 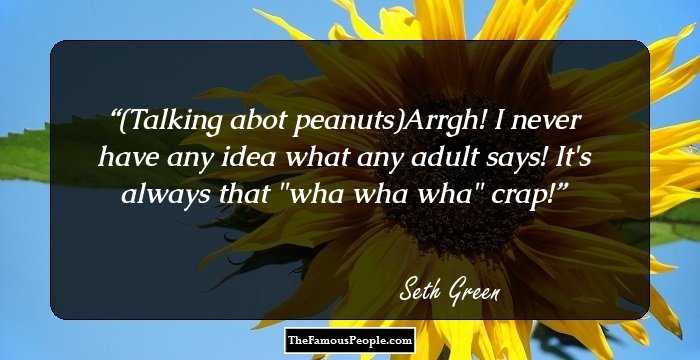 Quotes: Never, I
Personal Life & Legacy
Green married actress Clare Grant in 2010. His wife had worked with him on several of his projects.
Trivia
He was named on the ‘It List’ of the 100 Most Creative People in Entertainment by ‘Entertainment Weekly’ in 1998.
He regards Robin Williams as his idol.

See the events in life of Seth Green in Chronological Order