Sarah Jessica Parker is a well-known American actress and producer. She became known for her portrayal of Carrie Bradshaw in the popular TV series ‘Sex and the City’. The show, which aired on HBO for six years, earned massive recognition worldwide and won seven Emmy Awards out of fifty nominations. Parker herself won two Emmys in two different categories for her role in the show. She reprised her role in the film ‘Sex and the City’ which was a sequel to the TV series. It was a huge success commercially. The film was followed by yet another sequel ‘Sex and the City 2’ which again turned out to be a financial success. In her career so far, she has also appeared in several other films, such as ‘Honeymoon in Vegas,’ ‘Failure to Launch’, ‘Escape from Planet Earth’, and ‘All Roads Lead to Rome’. Parker’s recent works on television include her role in the series ‘Divorce’, which has been airing on HBO for two seasons. Other than acting, she has also launched multiple brands of her own which include the perfume ‘Lovely’ and a footwear line named SJP Collection. Jennette McCurdy
25th March In History
DID WE MISS SOMEONE?
CLICK HERE AND TELL US
WE'LL MAKE SURE
THEY'RE HERE A.S.A.P
Quick Facts

American People
American Women
Ohio Actresses
Aries Actresses
American Actresses
Childhood & Early Life
Sarah Jessica Parker was born on March 25, 1965 in Nelsonville, Ohio, in the US. Her mother’s name was Barbara Parker and she was a nursery school operator. Her father’s name was Stephen Parker and he worked as a journalist. Her parents divorced when she was very young and she was raised by her mother and stepfather. She contributed to the family income through her dancing and singing gigs.
With support from her family, she eventually won her first Broadway role in ‘The Innocents’. They then moved to New Jersey, where she studied at the Dwight Morrow High School. Later, she attended the School of American Ballet in New York City, the New York Professional Children’s School, the School for Creative and Performing Arts, and finally the Hollywood High School in Los Angeles. 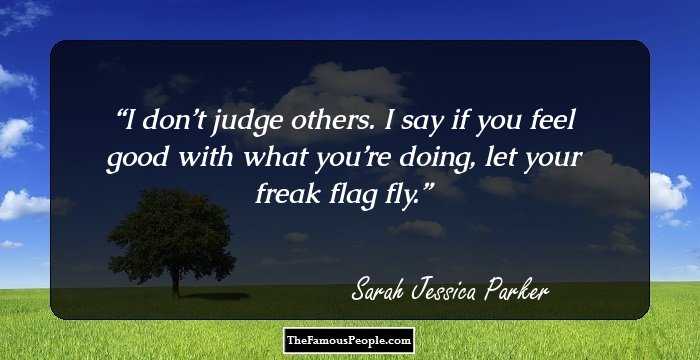 Quotes: You, I
Continue Reading Below
Career
After appearing in multiple Broadway productions, Sarah Jessica Parker made her television debut. Her first important role on TV was in the series ‘Square Pegs’. The show, which starred her in the lead role, aired for 20 episodes from September 1982 to March 1983. Other TV shows she acted in include ‘A Year in the Life’ which aired from 1987 to 1998 and ‘Equal Justice’ which aired from 1990 to 1991.
Her early works on the big screen include ‘Firstborn’ (1982), ‘Flight of the Navigator’ (1986), ‘LA Story’ (1991) and ‘Honeymoon in Vegas’ (1992). In the mid-1990s, she continued to appear in several other successful films, such as ‘Hocus Pocus’ (1993), ‘Mars Attack’ (1996) and ‘The First Wives Club’ (1996).
In 1998, she started playing the lead role of Carrie Bradshaw in the TV series ‘Sex and the City’. The show became very popular in the coming years and was nominated for fifty Emmy Awards, winning seven. The show aired for six seasons, starting from June 1998 to February 2004. After the end of the series, she signed a contract worth $38 million with ‘Gap,’ a well-known clothing company, to appear in their advertisements till early 2005.
In the ensuing years she appeared in films, such as ‘The Family Stone’ (2005), ‘Failure to Launch’ (2006) and ‘Did You Hear About the Morgans?’ (2009). She reprised her role of Carrie in the films ‘The Sex and the City’ (2008) and ‘The Sex and the City 2’ (2010) which were hugely successful commercially. The former received mixed reviews while the latter received negative reviews.
In 2013, she played a voice role in ‘Escape from Planet Earth’, a Canadian-American animated film which was her first voice role in a movie. The film was a commercial success, but was met with mixed to negative reviews.
Her most recent works on the big screen include her roles in ‘All Roads Lead to Rome’ (2016) and ‘Best Day of My Life’ (2017). She has also been playing the lead role in the TV series ‘Divorce’ since 2016. She is also a producer and has been a part of many television shows in this capacity. 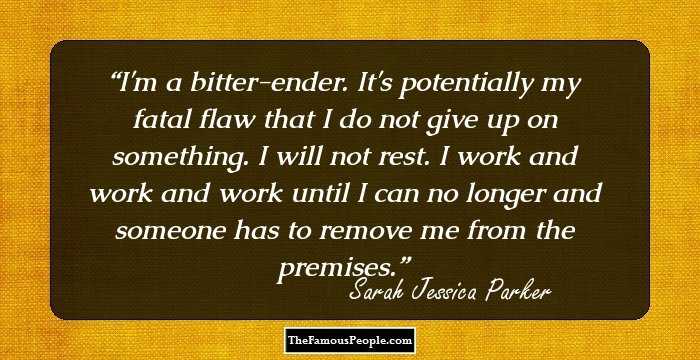 Quotes: Me, Will, I
Major Works
‘Honeymoon in Vegas,’ a 1992 comedy film, was one of Sarah Jessica Parker’s early works. Directed by Andrew Bergman, the film also starred James Caan, Nicolas Cage, Pat Morita and Peter Boyle. The film was a commercial success and was also nominated for two Golden Globe Awards. It was met with positive to mixed reviews.
The TV series ‘Sex and the City’ is the most significant work in Parker’s career. The series, which aired from 1998 to 2004, was based on a book of the same name. It revolved around the lives of four single women in New York and how they tackle various issues. The show earned huge popularity over its run and won many awards, including seven Emmy Awards. It was aired in a few other countries as well.
‘Did You Hear About the Morgans?’ is a 2009 American romantic comedy thriller film where Parker played a main role. Directed by Mark Lawrence, the film also starred actors such as Hugh Grant, Sam Elliot, Michael Kelly, and Elisabeth Moss. The film did well commercially, but was met with mostly negative reviews.
Awards & Achievements
Sarah Jessica Parker has been nominated for ten Emmy Awards in her career so far, all of them for her work in ‘Sex and the City’. She won two out of them, one as a producer in the category of ‘Outstanding Comedy Series’ and the other one in the category of ‘Outstanding Lead Actress’.
Her work in ‘Sex and the City’ earned her nine nominations for the Golden Globe Awards, out of which she won four, all of them in the ‘Best Actress’ category.
In 2017, she won the ‘People’s Choice Award’ for her role in the HBO TV series ‘Divorce’. 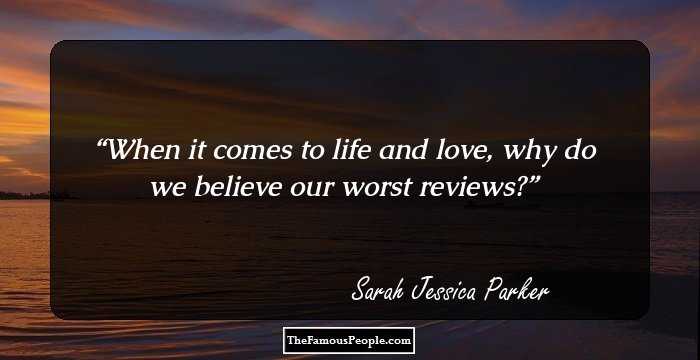 Quotes: Life, Love, Believe
Personal Life
Sarah Jessica Parker dated Robert Downey Jr. from 1984 to 1991. However, their relationship ended due to Downey’s drug problems. She later dated John F Kennedy Jr. for a while.
She married Matthew Broderick, a well-known American actor, in 1997. The couple has one son, born in 2002, and twin daughters, delivered via surrogate, in 2009.