Advanced Search
Samuel Morse was an American painter and inventor, who invented the single-wire telegraph system.. Born to a modest household, Morse started his career as a painter, his forte being portraiture. In no time, he established a name for himself in the field of painting and painted portraits of significant personalities such as, former US President John Adams and James Monroe and French aristocrat Marquis de Lafayette. Though Morse was always fascinated with electromagnetism, it was the sudden news of the death of his wife that gave him the impetus to come up with a device that allowed long-distance communication. After years of hard work, he finally came up with the single-wire telegraph system that changed the way people sent and received messages in the world. He co-developed Morse Code, a method of transmitting textual information as a series on an off tones. Interestingly, in some parts of the world, Morse Code is still in use in radio communications Kim Novak
DID WE MISS SOMEONE?
CLICK HERE AND TELL US
WE'LL MAKE SURE
THEY'RE HERE A.S.A.P
Quick Facts

American People
American Men
American Artists
American Artists & Painters
Male Artists & Painters
Childhood & Early Life
Samuel Morse was born on April 27, 1791 in Charlestown, Massachusetts to Jedidiah Morse and Elizabeth Ann Finley Breese.
Morse gained his early education from Philips Academy in Andover, Massachusetts before enrolling at the Yale University to study religious philosophy, mathematics and science of horses.
While at Yale, he attended lectures on electricity. To support his living, he took to painting. In 1810, he graduated from Yale with Phi Beta Kappa honors.
His most notable early work includes ‘Landing of the Pilgrims’ which caught the attention of Washington Allston. Impressed by his work of art, he encouraged Morse to move to England. 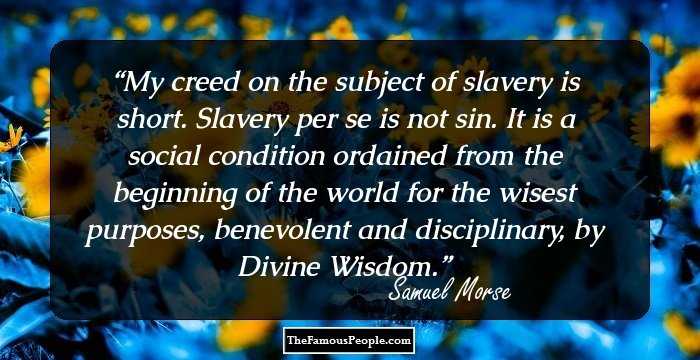 See the events in life of Samuel Morse in Chronological Order