Sam Walton was an American businessman who founded the Wal-Mart Stores Inc. which grew to be the world’s largest corporation by revenue as well as the biggest private employer in the world. Founded in 1962, today the company has thousands of stores all over the world. Sam Walton had spent years in the retail management business before opening the first Wal-Mart store. Born into a humble farming family in the late 1910s, he grew up during the Great Depression when not just his own family, but everyone else around him struggled to make ends meet. Still a young boy, he took up a variety of jobs in order to contribute to his family’s income and this taught him the value of hard work and determination at a young age. He attended the University of Missouri and graduated with a bachelor’s degree in economics. After working for a while at J. C. Penney, he went on to serve in the army during the war years before venturing into the retail management business. He took over management of his first variety store when he purchased a Ben Franklin variety store in Newport, Arkansas. Eventually he opened the first Wal-Mart store in 1962 which has now grown to include over 11,000 stores in 28 countries. Jeff Bezos
29th March In History
DID WE MISS SOMEONE?
CLICK HERE AND TELL US
WE'LL MAKE SURE
THEY'RE HERE A.S.A.P
Quick Facts

American Celebrities
American Men
Aries Entrepreneurs
American Entrepreneurs
Aries Men
Childhood & Early Life
He was born as Samuel Moore Walton on March 29, 1918, in Kingfisher, Oklahoma, U.S. to Thomas Gibson Walton and Nancy Lee. He had one younger brother, James. His father was a farmer who later entered farm mortgaging as farming did not provide enough money to provide for his family.
The family moved frequently during Sam’s early childhood. He was a good student and he became the youngest Eagle Scout in Missouri’s history while studying in the eighth grade in Shelbina, Missouri.
His family finally settled in Columbia, Missouri. He grew up during the Great Depression and took up numerous small jobs in order to help his family which was struggling to make ends meet. Among other chores, he sold magazine subscriptions and delivered newspapers. He also milked the family cow, bottled the surplus and sold it to customers.
He attended David H. Hickman High School in Columbia where he was voted the "Most Versatile Boy" at the time of his graduation in 1936.
He then went to the University of Missouri as a Reserve Officers' Training Corps (ROTC) cadet. He also joined the Zeta Phi chapter of Beta Theta Pi fraternity and served as President of Burall Bible Class, a large class of students from the University of Missouri and Stephens College.
During his university days he became a member of QEBH, the well-known secret society on campus honoring the top senior men, and the national military honor society Scabbard and Blade. He graduated in 1940 with a bachelor’s degree in economics. 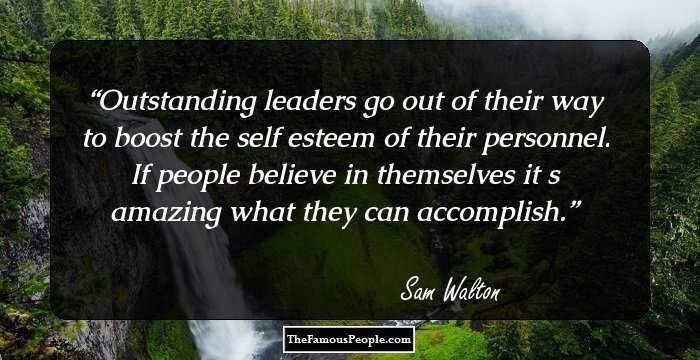 Quotes: Believe
Continue Reading Below
Career
Within days of his graduation, Walton joined J. C. Penney as a management trainee in Des Moines, Iowa. He resigned from the job in 1942 in order to serve in the World War II. Before joining the army, he worked at a DuPont munitions plant near Tulsa, Oklahoma for a while.
He joined the U.S. Army Intelligence Corps and supervised security at aircraft plants and prisoner of war camps. He eventually reached the rank of Captain in his army career and returned to civilian life once the war was over.
Married by now, he borrowed some money from his father-in-law and purchased a Ben Franklin variety store in Newport, Arkansas, in 1945. The store was a franchise of the Butler Brothers chain.
He found considerable success in retail management with his pioneering concepts, and by the early 1960s, Walton, along with his brother James, owned 15 Ben Franklin franchises and one independent store.
Walton now planned to open bigger stores in rural areas with discounted prices in order to attract more customers and achieve a higher sales volume. However, the Ben Franklin executives were not in favor of this concept and turned down the plan.
Undaunted, Sam Walton went on to open the first Wal-Mart store on July 2, 1962, in Rogers, Arkansas. Around this time the Walton brothers teamed up with Stefan Dasbach whom they collaborated with in order to grow their business.
Keeping the price of the products low was one of the major driving forces behind the success of the Wal-Mart stores. Walton focused his efforts on sourcing products from American manufacturers who could supply merchandise for the entire Wal-Mart chain at very low prices in order to meet the foreign competition.
Over the next few years several Wal-Mart stores sprung up all over the nation and by 1967, the Walton family owned 24 stores, registering up to $12.7 million in sales! Within a couple of years Walton officially incorporated his company as Wal-Mart Stores, Inc.
The company went public in 1970 and the first stock was sold at $16.50 per share. By 1972, Wal-Mart was listed on the New York Stock Exchange (WMT). By 1980, the company had reached $1 billion in annual sales.
Continue Reading Below
Ever the innovator, Sam Walton launched the first Sam's Club in the 1980s to serve small businesses and individuals. During the same decade, the first Wal-Mart Supercenter was also opened, combining a supermarket with general merchandise to provide one-stop shopping convenience.
Wal-Mart enjoyed continued success in the years to come and by the early 1990s, the company’s stock worth had surged to $45 billion. Wal-Mart became the nation’s largest retailer in 1991, surpassing even Sears, Roebuck & Company.
Walton had stepped down as CEO in 1988, but remained active in the company until his death in 1992. 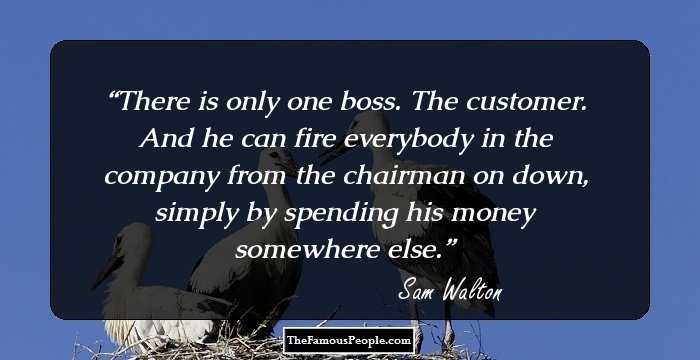 Quotes: Money, Business
Major Works
Sam Walton is best remembered as the founder of the retail corporation, Wal-Mart. Founded in the United States in 1962, the company is now a multinational with over 11,000 stores in 28 countries, under a total 65 banners. Wal-Mart is also the world's largest company by revenue, as well as the biggest private employer in the world.
Philanthropic Works
Sam Walton had a strong belief in giving back to the society. The Walmart Foundation was established in 1979 to contribute to the underprivileged, focusing on the core areas of opportunity, sustainability and community.
Along with his wife he supported various charitable causes and was active in the First Presbyterian Church in Bentonville where he served as a Ruling Elder and a Sunday School teacher. He also made considerable financial contributions to the church. 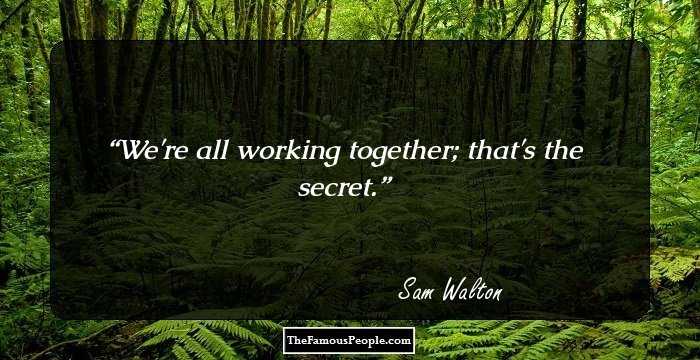 Quotes: Business
Awards & Achievements
From 1982 to 1988, ‘Forbes’ magazine named Walton the wealthiest man in the United States.
In 1992, Sam Walton was awarded the Presidential Medal of Freedom, the nation's highest civilian honor, by President George H. W. Bush and hailed as "an American original" who "embodies the entrepreneurial spirit and epitomizes the American dream."
In 1998, Walton was included in Time's list of 100 most influential people of the 20th Century.
Personal Life & Legacy
Sam Walton married Helen Robson on February 14, 1943. The couple had four children—three sons and one daughter.
Walton loved hunting, especially quail. Along with his wife he was active in the Church and also taught Sunday School. The Walton family also supported various charitable causes.
He suffered from two types of cancer: hairy-cell leukemia and bone marrow cancer during the later years of his life. Sam Walton died on April 5, 1992, aged 74.

See the events in life of Sam Walton in Chronological Order