Saffron Barker is a singer, YouTuber, and one of Britain’s most prominent social media celebrities. On her main YouTube channel she has 880K subscribers, while her vlogging channel has more than half a million subscribers. Her content mostly involves beauty, fashion, lifestyle, music, Q&As, and challenges which she does with her friends and family. She is quite famous on other social media platforms as well, with 640K and 266K followers on Instagram and Twitter respectively, 35K Facebook likes, and 27.9K YouNow fans. As a singer, Barker was a part of the all-girl group ‘Born2Blush’. Their first original song, ‘24seven’, was released on YouTube in March 2015. In December 2016, she was one of the 25 YouTubers who recorded ‘Christmas Without You’, a charity Christmas single benefiting ‘Make-A-Wish Foundation’. The song was penned by Grammy Award winning songwriters ‘Jackie Boys’. Currently she is hosting a six-episode original series for TalkTalk TV titled, ‘In My Day’, where she and other members of her family discuss different topics from the perspective of different generations. British People
Leo Youtubers
Female Vloggers
Female YouTubers
British Vloggers
The Meteoric Rise to Stardom
Saffron Barker has known fellow ‘Born2Blush’ members, Libby Whitehouse, Jazmine Tiley, and Georgia McNamara since she was three years old. In the early 2010s, they started singing together. They have appeared in multiple national level singing competitions in England. In May 2014, the group started a YouTube Channel where they uploaded their cover of Bruno Mars’ ‘Uptown Funk’. Sometimes in 2015, the group broke up. Barker set up her main channel in July of the same year. A few months later she launched the vloging channel. On her first video, posted in August 2015, she documented her visit to Florida. Since then she has accumulated 134 million views in total with her most popular video, ‘Types of Boyfriend’ which also starred her then-boyfriend Jake Mitchell, having 4 million views. Some of her other popular videos are ‘Her Room Tour’, ‘The Chapstick Kissing Challenge’, and ‘Boyfriend Does My Makeup’. In just a few years she has risen from obscurity to global fame!
Recommended Lists:

The Most Popular US Veterans
Continue Reading Below
Controversies & Scandals
As Peter Hewlett, Barker’s maternal grandfather, said in the very first episode of ‘In My Day’, the cost of fame is privacy, and Barker seems to be paying it. She started dating Jake Mitchell in early 2015. He is a famous YouTuber himself with more than a million subscribers on his main channel. In late 2016, Mitchell uploaded a picture on Snapchat of himself sleeping in someone’s bed. The internet exploded with speculations. Their fans quickly concluded that it was neither his nor Barker’s bed. It was later found out that he had cheated on Barker with Claudia Naya, a girl from their secondary school. Mitchell vehemently denied it, and his sister, Eloise, came to his defence. Things took a turn for the worse when their father, Rob, was accused of bullying Barker through a fake Twitter account. She and Mitchell broke up soon after.
What Makes Saffron Barker So Special
Saffron Barker is the perfect representative of the 21st century millennials whose world is fast, fleeting, and centred around their digital devices. This vivacious teenager is confident and smart. But perhaps, her greatest quality is her relatability. To her audience, she is a long distance best friend; they laugh with her, sharing her happiness, and they cry with her, being there in her moments of sorrow. Barker is involved with several charities. She has raised funds for the ‘Cancer Research UK’. She is also a part of the ‘Being Me’ Campaign.

Personal Life
Saffron Barker was born in Brighton, a seaside resort in East Sussex, England on July 24, 2000 to Darren and Wendy Barker. She is the middle child between two brothers, Casey, whose own YouTube channel has 173K subscribers, and Jed. She also has an adoptive brother, Jordan Comolli, who is an electronic musician. Since her public break-up with Mitchell, rumours have linked her to fellow YouTuber Joe Weller. It has also been reported that she is dating London-based musician Harvey but neither has made any statements on the matter as of yet, except for a few cryptic Twitter exchanges. 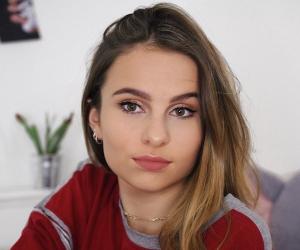