(Journalist and News Presenter Known for Her Shows: ‘The Roseanne Show’, ‘Chronicles from California’ and ‘Hollywood Heat’)

Ryan Haddon is an American journalist, presenter, and TV producer. She has done numerous entertainment-based reporting jobs for several newspapers and magazines. She has worked on the famous talk show ‘The Roseanne Show’ and on ABC’s morning program ‘Good Morning America’. A graduate of Boston University, Haddon has also been featured in the flick ‘Dick and Jack’, in the documentary titled ‘Ephemera: The Art of Impermanence’ as well as in the show ‘New York's Funniest’. Haddon has made guest appearances in a handful of popular television shows. On a personal level, Haddon is the daughter of former Canadian model Dayle Haddon. She has been married to actor Marc Blucas since 2009. She was earlier married to actor/producer Christian Slater. Haddon, who is a mother of two kids, is a strong and confident woman. As of now, she is not active on any social networking site although she loves her fans and admirers. Alyson Hannigan
DID WE MISS SOMEONE?
CLICK HERE AND TELL US
WE'LL MAKE SURE
THEY'RE HERE A.S.A.P
Quick Facts 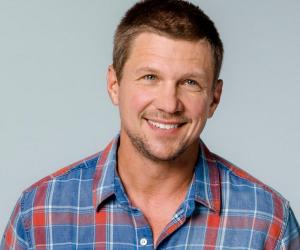 American People
American Women
Boston University
Women Journalists
Female TV Presenters
Career
Ryan Haddon began her journalism career as a reporter. She worked for many high-profile magazines and newspapers and she had a series of reporting jobs. Then she got the chance to be featured on the famous talk show ‘The Roseanne Show’. She also became a part of other popular shows such as ‘MacNeill/Lehrer NewsHour’ and ‘Good Morning America’.
Haddon has also hosted many TV shows including ‘Hollywood Heat’, NBC's ‘Extra’ and ‘Chronicles from California’. She was featured in the 2011 documentary titled ‘Ephemera: The Art of Impermanence’. In 2016, the American beauty appeared in the flick ‘Dick and Jack’. Haddon has also made guest appearances in famous TV shows like ‘New York's Funniest’.
Recommended Lists:

American Journalists
American TV Presenters
Women Media Personalities
American Female Journalists
Continue Reading Below
Controversies & Scandals
In 2003, Ryan Haddon was arrested for misdemeanor domestic battery against her then-husband Christian Slater. According to the reports, she threw a glass at him during an argument while on a trip to Las Vegas. Following this, she was taken to Clark County Detention Center. Haddon was released after 12 hours.
Recommended Lists:

American Media Personalities
American Female Tv Presenters
American Female Media Personalities
Aries Women
Personal Life
Ryan Haddon was born in 1971 in the United States to former Canadian model/actress Dayle Haddon. She grew up in Paris and Toronto. She attended Boston University and graduated from there with a degree in communications.
In 1998 Haddon began dating actor/producer Christian Slater. She got married to him on 12 February 2000. As a result of this marriage, she became the daughter-in-law of Michael Hawkins and Mary Jo Slater and the stepsister-in-law of Ryan Slater. Haddon gave birth to Slater’s kids, Jaden Christopher (who was born in 1999) and Eliana Sophia (who was born in 2001). Haddon and Slater officially separated in 2005. After getting divorced from Slater in 2007, Haddon went on to marry actor Marc Blucas.