Rupert Alexander Lloyd Grint is a British film and television actor who rose to fame as Ron Weasley, one of the three protagonists in the Harry Potter film series and Harry’s partner in crime in Hogwarts. Rupert has accompanied actors Daniel Radcliffe and Emma Watson in all the eight movies of the Potter series. This young man is also a passionate theatre lover. In fact, he started acting in stage shows in his school days. Later, he openly admitted that school was never a place of interest for him. He initially wanted to be an ice cream vendor but finally ended up being an actor. Other than the Potter movies, this handsome hunk has also played various other characters in different genres of movies. Making a smart move, he has invested his earnings from films in real estate business and has set up a company ‘Eevil Plan Properties’. It is one of the multi million pound housing empires in Hertfordshire. Currently living in his luxurious 18th century mansion worth 5.4 million pounds set in 22 acres, this happy-go-lucky, incredibly polite and gentle guy says, “I've still got my ice cream van if it doesn't all work out, so I'll be all right." British People
British Men
Virgo Actors
British Actors
Actors Who Are In Their 30s
Childhood & Early Life
Rupert Grint was born on 24 August 1988, in Harlow, Essex, England. He is the eldest of five siblings, the others being James, Georgina, Samantha and Charlotte. Rupert’s father Nigel Grint used to deal in car racing memorabilia and his mother Joanne was a homemaker.
Rupert grew up in Hertfordshire, a picturesque county to the north of London which is also very near to Leavesden Film Studios. It naturally fuelled his desire of becoming an actor.
During his school days, he took a special interest in theatre and staged a number of successful plays. He enrolled himself for weekend drama classes at Top Hat Stage School and got selected to play ‘Ron’ in the Harry Potter series at the age of 11. 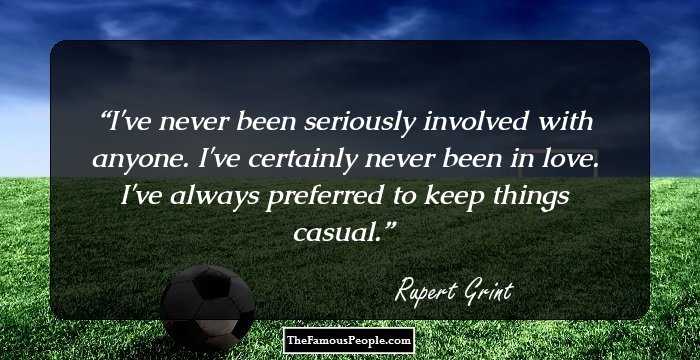 Quotes: Love, Never
Continue Reading Below
You May Like

Who Is The Greatest Female Warrior In History?
Career
Rupert Grint kick-started his career with the Potter mania. After his successful entry in the first film of the Potter series, ‘Harry Potter and the Philosopher’s Stone’ (2001), Rupert took part in the audition of a British Comedy ‘Thunderpants’ in 2002 and was selected as the second lead in it.
He then starred in the Potter sequels—‘Harry Potter and the Chamber of Secrets’ (2002) and ‘Harry Potter and the Prisoner of Azkaban’ (2004). He also completed his secondary school education from Richard Hale Secondary School in Hertford in 2004.
He started shooting for ‘Harry Potter and the Goblet of Fire’ in 2005. He also worked as a voice over artist for the ‘Baggy Trousers’ series of BBC at the same time.
In 2006, Rupert shared the screen with heavy weights like Laura Linney and Julia Walters in a comedy drama ‘Driving Lessons’. The fifth film of Potter series ‘Harry Potter and the Order of the Phoenix’ was released in 2007. In July 2009, the sixth part of Potter series – ‘Harry Potter and the Half-Blood Prince’ released and was a huge success.
Alongside the Potter movies, he also worked in two other movies around this time— the drama ‘Cherrybomb’ (2008) and comedy thriller ‘Wild Target’ (2010). In 2011, he made a cameo appearance in BBC popular comedy show ‘Come Fly with Me’ and starred as a lead in a Norwegian anti-war film ‘Into the White’. Grint also appeared in the music video for Ed Sheeran’s song ‘Lego House’ in the same year.
The year 2012 proved to be quite eventful for Rupert. He appeared along with Julie Walters and Stephen Fry as true English representatives for the TV commercial ‘Visit Britain’. He had also been a cast in the biopic of Dennis Wilson in the movie ‘The Drummer’ and narrated an entire film named ‘We are Aliens’. Grint also carried the 2012 London Olympic torch.
In 2013, Rupert played the role of Clyde in the show ‘Super Clyde’. He also debuted on stage with Jez Butterworth’s comedy ‘Mojo’. It was a huge hit and it ran for almost a year at the Harold Pinter theatre, London. He also starred in an adaption of Macbeth—‘Enemy of Man’.
He made his Broadway debut as Frank Finger in the play ‘It’s Only a Play’ in 2014 and he starred in the movie ‘Moonwalkers’ in 2015. He had also provided voice for ‘Ron’ in the video games adaption of ‘Harry Potter and the Order of the Phoenix’ and ‘Harry Potter and the Half-Blood Prince’. 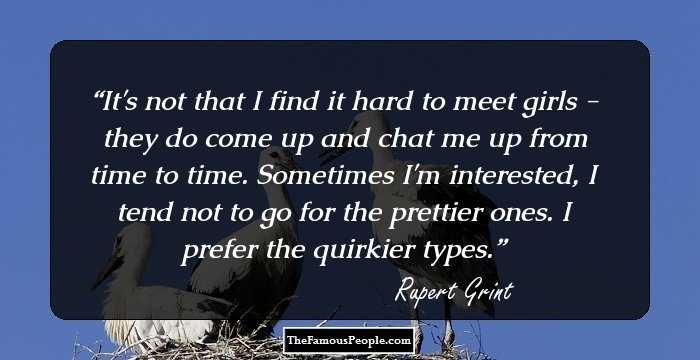 Quotes: Me, Time
Continue Reading Below
Major Works
Rupert Grint came up as a fresh face when the auditions for the Harry Potter film series started and proved himself capable enough to grab the role of ‘Ron’. Even though he has acted in several other movies in addition to the Potter franchise, he is still famous for his character Ron Weasley in Potter movies.
Awards & Achievements
Rupert Grint became a superstar at quite an early age after the release of his first movie ‘Harry Potter and the Philosopher’s Stone’. For his role in the film, Grint won Satellite Awards (2002) in two categories—Outstanding New Talent and Most Promising Young Newcomer.
'Forbes' magazine ranked Grint no. 16 on its list of Top 20 earners under the age of 25 in 2007. He was earning 4 million dollars annually at that time.
He won the Otto Award for Movie Star for ‘Harry Potter and the Half-Blood Prince’ in 2010.
BBC Radio awarded him with the Best British Actor Award in 2011. He received the San Diego Film Critics Society Award for Best Ensemble Performance for his role in ‘Harry Potter and the Deathly Hallows—Part 2’ in the same year.
In 2012, he won the 38th People’s Choice Award for Favourite Movie Ensemble in ‘Deathly Hallows’.
He won a WhatsOnStage Award for Best London Newcomer for his role in the play ‘Mojo’ in 2014. 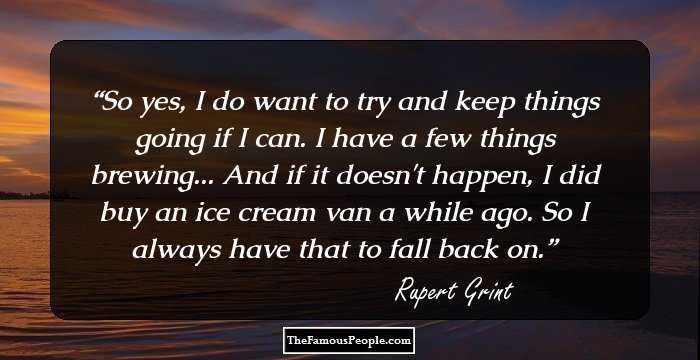 Love Life
Rupert Grint is reported to have been in relationships with Katie Lewis (2004-08), Lilly Allen (2008), Kimberley Nixon (2010), and Georgia Groome (2011). In October 2014, rumours about another relationship surfaced but no name was disclosed. He is reportedly single now.
Philanthropic Works
Rupert Grint participated in the Wacky Rally in 2010 to raise money for Royal National Lifeboat Institution and has donated clothes in charity functions and auctions several times. He has been supporting Little Star Awards since 2011 in support of cancer research UK.
Grint designed a butterfly for Chrysalis Collection that was auctioned on eBay.com to raise money for Keech Hospice Care in London. He took part in the advertisement campaign ‘Make Mine Milk’ to promote and encourage the importance of drinking milk daily.
Trivia
Rupert Grint is a unique caricature artist and can create any solid impression within 60 seconds.
He is arachnophobic and is scared of spiders!
He loves all kinds of music but his favourite is classic rock and roll.
He is an animal lover and owns two Labrador retrievers—Ruby and Fudge.
Grint’s childhood dream was to become an ice cream vendor. He now has an ice cream truck with all the modern facilities!

Quotes By Rupert Grint | Quote Of The Day | Top 100 Quotes

See the events in life of Rupert Grint in Chronological Order