Roy Kelton Orbison was an American singer and songwriter. Blessed with one of the most distinguished, commanding, flexible, and quirky voices, Orbison is considered one of the most popular rockabilly singers ever. He had a very powerful and romantic voice that left people mesmerized. He belonged to a working class family and scripted his own success story in the music industry. Despite the fact that he faced many obstructions in the beginning, he did not stop making music and singing even for a day. His peculiar three-octave voice, unconventional writing, and looks made him a favorite amongst rockabilly fans. He was also admired by his contemporaries and other great singers; Elvis Presley once called him “the greatest singer in the world.” He is remembered for his romantic song ‘Oh, Pretty Woman,’ which was honored with a ‘Grammy Hall of Fame Award.’ It was also named one of Rock and Roll Hall of Fame's ‘500 Songs that Shaped Rock and Roll.’ ‘Rolling Stone’ magazine ranked him 13th on its '100 Greatest Singers of All Time' list. In 1987, he was inducted into the 'Rock and Roll Hall of Fame.' In 2014, he was inducted into the 'Musicians Hall of Fame and Museum.' Roy Orbison was born on April 23, 1936, in Vernon, Texas, USA, to Orbie Lee Orbison and Nadine Shults. His father was a car mechanic and oil well driller and his mother was a nurse. His parents lost their jobs during the Great Depression.

During the Great Depression, the Orbison family moved to Fort Worth, where he spent his childhood. Orbison went to ‘Denver Avenue Elementary School’ until the family moved and settled in Wink, Texas.

Orbison was a shy kid, full of self-doubt and low self-confidence. However, singing was something that he was quite confident about and he always became the center of attention whenever he was asked to sing at a gathering.

At ‘Wink High School,’ he formed an informal band with friends called ‘The Wink Westerners’ and managed to get a radio slot for themselves. Later, he attended ‘North Texas State College’ and planned to study geology.

In ‘North Texas State College,’ he formed another band called ‘The Teen Kings’ and started singing professionally during the nights. As a result, his grades dropped and he had to enroll himself at ‘Odessa Junior College.’ 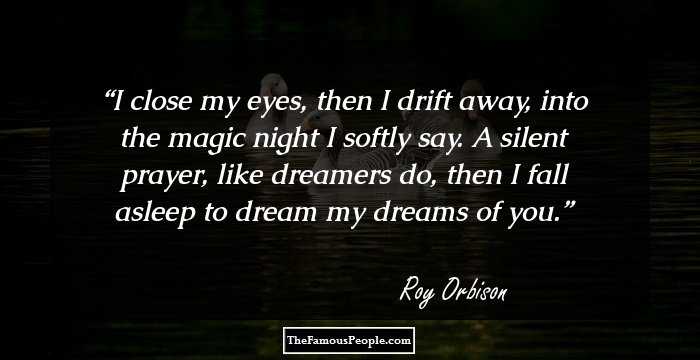 Quotes: You, Like, Dreams, I
Continue Reading Below
Career

‘The Teen Kings’ was offered a contract by ‘Sun Records’ and they traveled to Memphis for recording their famous composition ‘Ooby Dooby,’ which peaked at No. 59 on the ‘Billboard Hot 100.’ The song sold 200,000 copies.

Some members of ‘The Teen Kings’ decided to leave the band during the late-50s because of disputes over writing credits, but Orbison decided to stay and work on his technical skills. He gradually stopped recording, and quit completely in 1958.

He then managed to impress ‘Nashville Sound’ and signed a deal with the record company in 1960. His song ‘Uptown’ earned a spot on the ‘Billboard Top 100’ list.

‘Only the Lonely,’ written and recorded in 1960, became one of Orbison’s most successful songs. It reached at No. 2 on the ‘Billboard Top 100’ and made him famous in the musical world.

He became one of the most sought after singers and toured all over America for three months. This was followed by another hit track ‘Blue Angel,’ which peaked at No. 9. He then came up with ‘Claudette’ and ‘I’m Hurtin’—but these did not do as well as the previous songs.

From 1960 to 1965, Orbison was at the peak of his career as he recorded nine Top 10 hits and ten Top 40 hits, such as ‘Running Scared,’ ‘Crying,’ ‘Oh, Pretty Woman,’ etc. These were sung in Orbison’s unconventional style, which had become extremely famous by now.

A tragedy struck Orbison in the late-1960s when he lost his wife and two sons. It had such a great impact on his life that he could not produce hits anymore. Also, rockabilly had lost its charm by now.

Orbison’s musical career was revived in the 1980s when he accompanied ‘Eagles’ during their ‘Hotel California’ tour. He recorded a Grammy-winning duet with Emmylou Harris titled ‘That Lovin’ You Feeling Again.’

Orbison managed to stage a successful comeback in the late-1980s and joined the all-star super group ‘The Traveling Wilburys’ alongside Tom Petty, Bob Dylan, and George Harrison. He was also inducted into the ‘Rock and Roll Hall of Fame.’

A demo of Orbison's ‘The Way Is Love’ was released as part of the 25th-anniversary deluxe edition of ‘Mystery Girl’ in 2014. 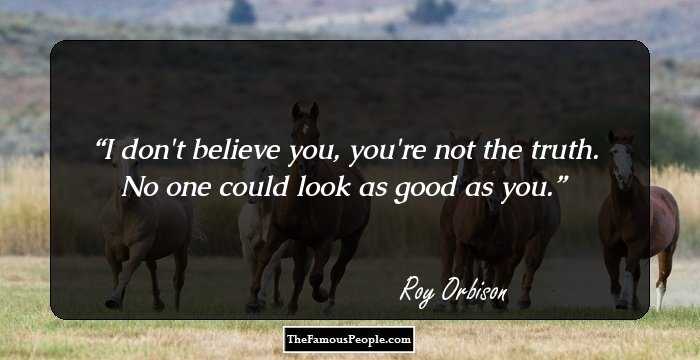 Quotes: You, Believe, I
Major Works

Orbison will always be remembered for his unconventional style of singing. Though he is known for many songs, ‘Oh, Pretty Woman’ is probably one of his most loved songs. The song was honored with a ‘Grammy Hall of Fame Award.’

Orbison was honored with six ‘Grammy Awards.’ ‘Oh, Pretty Woman’ earned a ‘Grammy Hall of Fame Award.’ It was also named one of Rock and Roll Hall of Fame's ‘500 Songs that Shaped Rock and Roll.’

Orbison married his 16-year-old girlfriend Claudette Frady in 1957. They had three sons together: Roy Dewayne, Anthony King, and Wesley.

He married Barbara in the year 1969 and remained married to her until his death. The couple had two children together: Roy Kelton Orbison Jr. and Alex Orbison.

Orbison died of heart attack in Tennessee at the age of 52 on December 6, 1988. Although he complained about recurring chest pain and exhaustion to his friends and family, he never did anything about it.

Trivia
Towards the end of his life, he became close friends with Johnny Cash and k.d. lang.

He was voted the 37th ‘Greatest Artist in Rock 'n' Roll’ by ‘Rolling Stone.’

He was close friends with Elvis Presley and actor Martin Sheen.

His first hit song ‘Only the Lonely’ was supposed to be performed by Elvis Presley but he rejected the song due to practical constraints.

He recorded the song ‘Hound Dog Man’ in the memory of Elvis Presley.

Marvel Comics’ ‘Doctor Octopus’ is said to have been based on this famous American singer-songwriter.

See the events in life of Roy Orbison in Chronological Order