Ronaldinho is a Brazilian footballer considered to be one of the best players of his generation. A player regarded for his technique, tricks, overhead kicks, and dribbling, he was a member of Brazil's 2002 World Cup winning team. Playing in his very first World Cup, in 2002, he scored the game-winning score in a quarter-final victory over England. Along with Ronaldo and Rivaldo, he was a part of the attacking trio that made the Brazilian team one of the most formidable ones in international football. Born as the son of a small-time footballer, Ronaldinho developed an early interest in the game and started playing in the youth club matches by the time he was eight. He first caught the media’s attention when as a 13 year old he scored all 23 goals in a 23–0 victory against a local team. Identified as a rising star, he made his senior side debut during the 1998 Copa Libertadores and eventually signed a five-year contract with French side Paris Saint-Germain in 2001. He was a member of the Brazilian squad in the World Cup 2002 and played an active role in helping his team clinch the championship. He later on joined the FC Barcelona of the Spanish league and achieved great success over the next few years, winning back-to-back FIFA World Player of the Year awards in 2004 and 2005 Philippe Coutinho
21st March In History
DID WE MISS SOMEONE?
CLICK HERE AND TELL US
WE'LL MAKE SURE
THEY'RE HERE A.S.A.P
Quick Facts

Brazilian People
Brazilian Men
Tall Celebrities
Tall Male Celebrities
Male Sportspersons
Childhood & Early Life
He was born as Ronaldo de Assis Moreira, on 21 March 1980, in the city of Porto Alegre, the state capital of Rio Grande do Sul, Brazil. His mother Dona Miguelina Elói Assis dos Santos worked as a salesperson while his father, João de Assis Moreira, was a shipyard worker who also played football for a local club.
He inherited his father’s passion for football and started playing organized football as a small child. Unfortunately, his father whom he idolized died of a heart attack when Ronaldinho was eight.
He became an active participant in local youth club matches and acquired the nickname ‘Ronaldinho’ during this time. He first came into limelight when he scored all 23 goals in a 23–0 victory against a local team when he was 13.
In 1997, he was selected for Brazil's Under-17 national team and helped his squad win the FIFA Under-17 World Championship in Egypt. 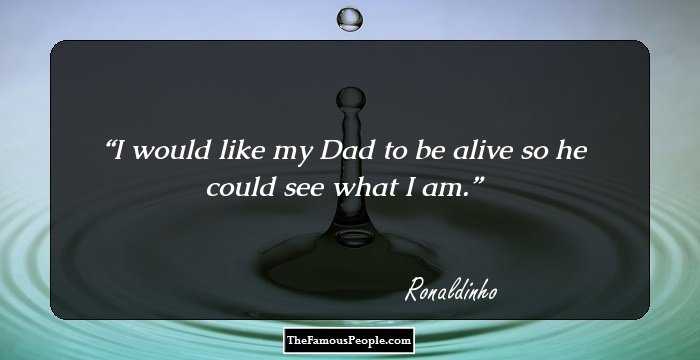 Continue Reading Below
Career
Ronaldinho signed his first professional contract to play for Grêmio and made his senior side debut during the 1998 Copa Libertadores. He achieved considerable success playing for the team and helped them win the inaugural Copa Sul-Minas.
In 2001, he signed a five-year contract with French side Paris Saint-Germain and played a key role in the 2001–02 edition of the Coupe de la Ligue, helping his team reach the semi-finals where they were eliminated by Bordeaux.
He was a part of the Brazil’s football team that won the FIFA World Cup in 2002. In the team, he starred alongside two other football legends, Ronaldo and Rivaldo.
He joined the FC Barcelona of the Spanish league in 2003 and won his first league title in 2004–05. He was at the peak of his form during this time and was named FIFA World Player of the Year on two consecutive years.
In the 2005-06 season, he played a pivotal role in helping Barcelona win their first Champions League title in 14 years. He performed brilliantly throughout the season and finished the season with a career-best 26 goals, including 7 in the Champions League. He scored his 50th career league goal against Villarrea in November 2006.
Overall he enjoyed a very successful career with Barcelona and played his 200th career match for the team in a league match against Osasuna on 3 February 2008. However, he was plagued by injuries for most of the 2007-08 season.
In July 2008 he signed a three-year contract with Milan and finished his first season with the team with 10 goals from 32 appearances in all competitions. His stint with Milan was not very successful and he joined Flamengo in 2011.
He moved to Atlético Mineiro in June 2012, signing a six-month contract. In 2013, he helped the team win Campeonato Mineiro and led his club to its first ever title of the Copa Libertadores. Following his successful stint with the team, he renewed his contract in January 2014 and played for the club till July 2014.
In September 2014 he signed a two-year contract with the Mexican club Querétaro.
Continue Reading Below 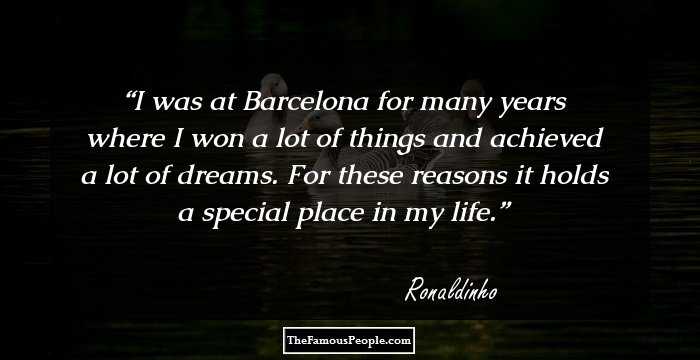 Awards & Achievements
He is the recipient of two La Liga Foreign Player of the Year - Don Balón Award (2003-04 and 2005–06).
He won two back-to-back FIFA World Player of the Year award in 2004 and 2005.
He won the inaugural FIFPro World Player of the Year in September 2005. The same year, he was also named European Footballer of the Year.
He featured in the ‘FIFA 100’, a list of the world's greatest living players compiled by Pelé.
Personal Life & Legacy
He is very close to his siblings. His brother Roberto acts as Ronaldinho's manager, while his sister Deisi works as his press coordinator.
He has one son with the Brazilian dancer Janaína Mendes. His son is named João after Ronaldinho's late father. 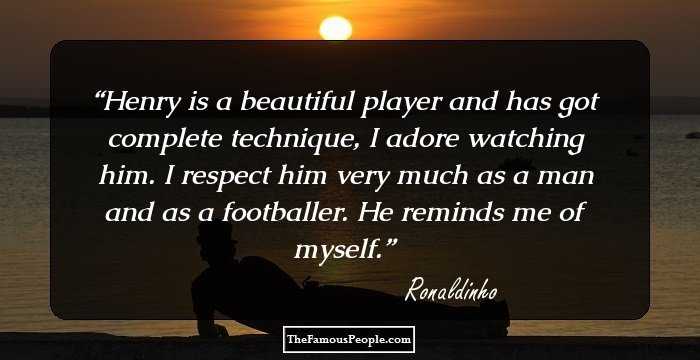 Quotes: Beautiful
Trivia
Ronaldinho is one of the world’s most popular sportsmen and has endorsed for many companies including Nike, Pepsi, Coca-Cola, EA Sports, and Gatorade.
He acquired Spanish citizenship in 2007.

Quotes By Ronaldinho | Quote Of The Day | Top 100 Quotes

See the events in life of Ronaldinho in Chronological Order