(Brazilian Professional Football Player Who Plays as a Forward)

Advanced Search
Neymar is a Brazilian footballer who plays for Brazil national team and the French club ‘Paris Saint-Germain.’ He is known as one of the world’s leading footballers. Neymar, like many other football players in Brazil, started off as a street footballer. But his father, who had played professional football, helped him in taking the game seriously so that he could become a professional. Neymar joined the youth ranks at ‘FC Santos’ when he was only 11 years old. In fact he was accepted into the youth program of the popular Spanish club ‘Real Madrid’ but he decided to stay back in Brazil after he was offered a higher pay. Throughout his time at ‘Santos,’ Neymar scored one spectacular goal after another, and his skills became the talk of the town. As a result, the biggest clubs in the world vied with each other to sign him. In 2013, he signed with ‘Barcelona’ and immediately made an impact before finally winning the treble for the Catalan club in 2015. During the course of his career, Neymar went on to become a prominent player for the Brazilian national team and helped his team reach the semi-final of the 2014 ‘World Cup’ which was held in Brazil. Neymar is without a doubt one of the leading footballers in the world and is all set to become one of the greatest footballers of his generation. Hulk
DID WE MISS SOMEONE?
CLICK HERE AND TELL US
WE'LL MAKE SURE
THEY'RE HERE A.S.A.P
Quick Facts

Brazilian People
Brazilian Men
Male Sportspersons
Brazilian Sportspersons
Aquarius Football Players
Childhood & Early Life
Neymar da Silva Santos Junior was born on 5 February 1992, in the Mogi das Cruzes municipality of Sao Paulo, Brazil. His father Neymar Santos Senior was a professional footballer and used to be his trainer. His mother’s name is Nadine da Silva.
During his childhood, Neymar played street football as well as futsal. Playing futsal and street football with his friends helped him hone his skills as a footballer. In 2003, he started representing the youth ranks of the ‘Portuguesa Santista’ team and moved to the city of Sao Vicente.
Neymar joined the famous Brazilian club ‘FC Santos’ in 2003 when he was only 11 years old. After joining ‘FC Santos,’ he went from strength to strength as a player. He signed his first senior contract with ‘FC Santos’ at the age of 17. 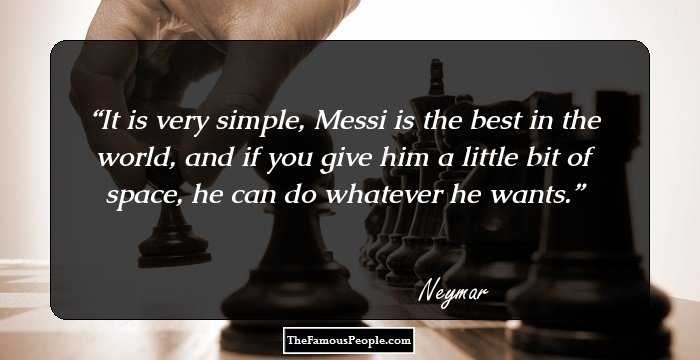 Quotes: You
Continue Reading Below
Career
In 2009, Neymar made his senior team debut for ‘Santos FC.’ Over the next four years, he became a prolific goal scorer for his team as he helped the team win the ‘Libertadores Cup.’ He scored a total of 54 goals in 102 appearances for the club. Throughout his time at the club, he was constantly being courted by the biggest clubs in Europe. In fact, he was accepted by the ‘Real Madrid’ academy at the age of 14 but he stayed back with ‘FC Santos’ after the club offered him a better salary.
After being overlooked by the Brazilian football team manager Dunga for the 2010 ‘World Cup’ in South Africa, Neymar made his international debut in a friendly match later that year. The following year, he scored twice for Brazil in an unsuccessful ‘Copa America’ campaign. A year later, he scored thrice in the ‘Olympics’ to win a silver medal for Brazil.
Neymar was being courted by the biggest clubs in the world while he was playing for ‘Santos FC.’ After a tug of war between the Spanish giants ‘Real Madrid’ and ‘Barcelona,’ Neymar signed with ‘Barcelona’ in 2013 for a transfer fee of 86.2 million Euro or $96.5 million. The same year, Neymar scored four goals in the ‘Confederations Cup,’ and Brazil ended up winning the tournament, beating Spain in the final.
During the 2013 season, Neymar started playing for ‘Barcelona.’ During his first season for the club, he impressed everyone as he scored goals in important games, including a game in the ‘El Clasico’ against ‘Real Madrid.’ The following season, he scored 39 goals across all competitions for ‘Barcelona,’ and the club went on to win the ‘UEFA Champions League’ and ‘Champions League’ treble.
In the 2014 ‘FIFA World Cup,’ Neymar was Brazil’s main star as the team went in to the tournament in search of Brazil’s sixth ‘World Cup’ title. Neymar scored four times in the tournament but was injured in the quarter-final match against Columbia. As a result, he could not play in the semi-final match against Germany. Brazil lost the semi-final match and was eliminated from the ‘World Cup’ in a humiliating manner.
During the 2015-16 season, he missed the ‘UEFA Super Cup’ due to health issues. However, he was shortlisted for the 2015 ‘FIFA Ballon d’Or’ where he finished third. He helped his team by scoring a goal against ‘Sevilla’ in the ‘Copa del Rey’ finals, winning the domestic double for the second consecutive time. He was also made the captain of his team for ‘Copa America’ but was suspended in the second match.
In the 2016-17 season, Neymar was the star of his club, scoring winning goals for the team at the ‘UEFA Champions League’ round of 16. He also scored his 100th goal for ‘Barcelona’ on 2 April 2017. That year, his club also won the ‘Copa del Rey’ final. He was also made the captain of the Brazilian national team for the ‘Summer Olympics’ at Rio. He scored the winning goal against Germany in the finals, bringing the nation its first ‘Olympic’ gold medal at the men’s football.
Neymar debuted for the ‘Paris Saint-Germain’ club during the 2017-18 season, scoring a goal in his first match against ‘Guingamp.’ Though he sustained an injury to his right foot, he ended the season with 28 goals in 30 matches.
The 2018-19 season was not great for the talented player as he was still recovering from his injury. He lost many matches at the ‘Champions League,’ and also lost the finals of ‘Coupe de France’ against ‘Rennes.’ Also, the Brazilian national team was eliminated from the 2018 ‘World Cup’ after losing to Belgium in the quarter finals. He was ruled out of the ‘Copa America’ tournament in 2019 after he sustained an ankle injury against Qatar in a friendly match. 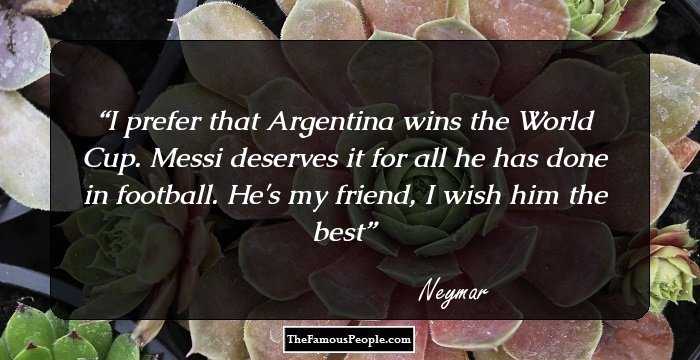 Quotes: I
Awards & Achievements
In 2011, Neymar won the ‘World Soccer Young Player of the Year’ award. In the same year, he also won the ‘FIFA Puskas Award’ for scoring the best goal of the year.
He won the ‘Golden Ball’ for his performance at the ‘FIFA Federations Cup’ in 2013. He was named ‘La Liga Best World Player’ after the 2014-15 season.
Neymar has always been a prodigious talent since he made his debut as a teenager for ‘Santos’ in Brazil. But his greatest achievement as a footballer is his haul of 39 goals during the 2014-15 season, at the end of which his club ‘Barcelona’ won the treble. He scored 10 goals in the ‘Champions League’ as well, and ended up as the joint top scorer.
Personal Life & Legacy
Very little is known about Neymar’s private life, but he did have a child (a boy) with a woman named Carolina Dantas in 2011. According to reports, he was not in a serious relationship with her. The name of his son is Davi Lucca and he lives with Neymar. 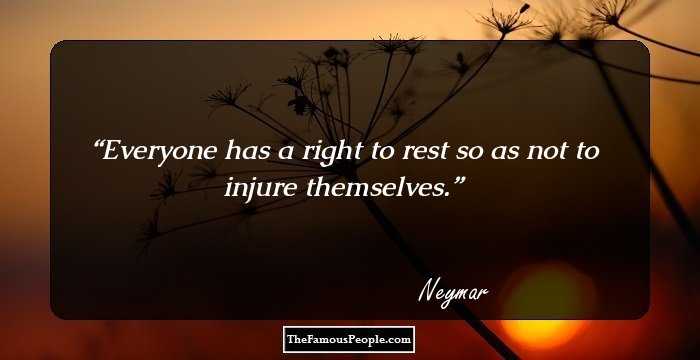 See the events in life of Neymar in Chronological Order