Advanced Search
Robin Wright is an American actress and director best known for her works in films like ‘Message in a Bottle,’ ‘Forrest Gump,’ and ‘Unbreakable.’ She is also known for playing ‘Kelly Capwell’ in the popular television series ‘Santa Barbara.’ Born to highly accomplished parents in Texas, she was a bright and confident young girl during her growing up days. Her good looks, self-confidence, and desire to be famous led her to apply for modeling assignments as a teenager. At just 14, she began her professional career, working as a model and traveling around the world. Even though she realized early in her life that she wanted to make a name for herself in the show business, she returned to school to graduate. Upon graduation, she embarked on her ambition of making it big as an actress. In spite of not having any formal training in acting, she auditioned for and landed a role in the series ‘Santa Barbara.’ Eventually, her role in the series established her as a talented actress in the industry. After finding success in television, she went on to establish herself in the film industry as well. She then tried her hand at direction and directed 10 episodes of the popular TV series ‘House of Cards.’ Over the course of her career, she has received a ‘Golden Globe Award’ and several ‘Primetime Emmy Award’ nominations. In addition to being a career oriented woman, Robin is also a doting mother of two children. Blake Lively
8th April In History
DID WE MISS SOMEONE?
CLICK HERE AND TELL US
WE'LL MAKE SURE
THEY'RE HERE A.S.A.P
Quick Facts

American People
American Women
Texas Actresses
Aries Actresses
American Actresses
Childhood & Early Life
Robin Gayle Wright was born on April 8, 1966, in Dallas, Texas, USA, to Gayle Gaston and Freddie Wright. Her mother was a national director in the ‘Mary Kay’ cosmetics sales force, while her father was a pharmaceutical executive.
Raised in California, she attended ‘La Jolla High School’ and ‘Taft High School.’
Pretty and confident, Robin began modeling as a teenager. She was just 14 when she started touring the world as a model. She loved the experience of traveling and learned a lot. 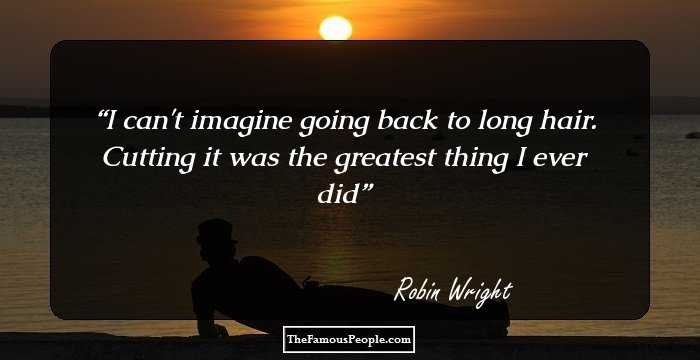 Continue Reading Below
Career
Her modeling agent recognized the potential this beautiful and talented girl possessed and encouraged her to audition for a role in the television series ‘Santa Barbara.’
Robin had no formal training in acting, but she auditioned and landed the role of ‘Kelly Capwell’ in the popular soap opera ‘Santa Barbara.’ She played the role from 1984 to 1988. This role marked her transition from a model to an actress.
Her portrayal of ‘Kelly’ caught the attention of director Rob Reiner who asked her to audition for his new film ‘The Princess Bride’ (1987). She landed the role of ‘Buttercup,’ a pretty damsel in distress, in the fantasy film.
She played ‘Jenny Curran’ in the 1994 comedy drama ‘Forrest Gump’ which was based on a novel of the same name by Winston Groom. Tom Hanks played the title role in this classic film.
In 1996, she starred alongside veteran actor Morgan Freeman in the film ‘Moll Flanders’ which revolves around the story of a girl living in an orphanage who gets transported to British West Indies.
She acted opposite Sean Penn and John Travolta in the 1997 film ‘She’s So Lovely’ in which she played a drug addict and alcoholic. In the film, her character is married to a mentally disturbed man.
She played ‘Audrey Dunn’ in the superhero drama film ‘Unbreakable’ in 2000. Starring Bruce Willis and Samuel Jackson in lead roles, the film revolves around the story of a security guard who realizes that he has superpowers.
She appeared as herself in the documentary ‘Searching for Debra Winger’ in which leading actresses discuss the difficulties that they face as women working in the film industry.
In 2005, she appeared in the two part mini-series ‘Empire Falls’ which was based on a novel of the same name by Richard Russo. The series was highly successful and won several awards.
Continue Reading Below
She was part of the ensemble cast of ‘New York, I love You’ (2008), a romantic comedy drama anthology of 11 short films. The anthology also had Bradley Cooper, Natalie Portman, Chris Cooper, Ethan Hawke, and James Caan.
She played ‘Mary Surratt’ in the 2010 film ‘The Conspirator,’ a historical drama about the events following the assassination of Abraham Lincoln. She portrayed the only female conspirator charged in the assassination.
In 2013, she started acting in the political television drama ‘House of Cards’ which is about an ambitious politician and his loyal wife who use manipulation and unethical means to achieve political success. The series ran for six seasons and ended in 2018.
She was part of the ‘Academy Award’ nominated sports drama film ‘Moneyball’ (2011) in which she appeared alongside Brad Pitt. In 2013, she was cast as the unpredictable aging actress in the live action animated drama ‘The Congress.’
Two years later, she was part of the epic biographical adventure film ‘Everest.’ In 2017, she played ‘General Antiope,’ aunt of ‘Diana,’ who guides and trains her in the superhero film ‘Wonder Woman.’
The same year, she was also part of the neo-noir science fiction film ‘Blade Runner 2049.’ In 2018, she was cast to reprise her role as ‘Antiope’ in ‘Wonder Woman 1984,’ which is slated for release in 2020. In 2019, it was announced that Robin would direct and act in the American-British-Canadian drama film ‘Land.’ 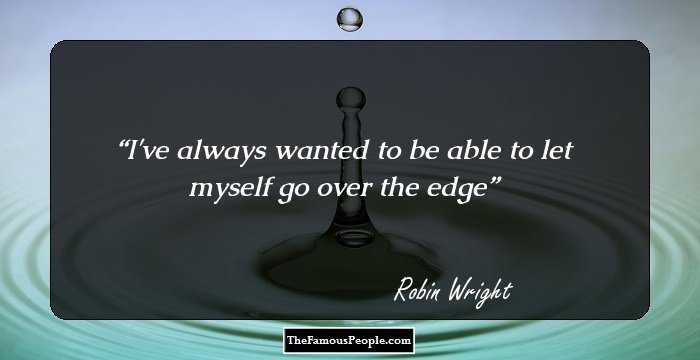 Major Works
Her performance as ‘Claire Underwood,’ a cold and manipulative woman in the political drama television series ‘House of Cards,’ is considered her best work till date. The series was based on a novel by Michael Dobbs. She received several awards and nominations for her performance.
Awards & Achievements
She won the ‘Golden Globe Award’ for ‘Best Actress in a TV Series Drama’ in 2014 for her role in ‘House of Cards.’ She also won the ‘Satellite Award’ for ‘Best Actress’ for the same role. 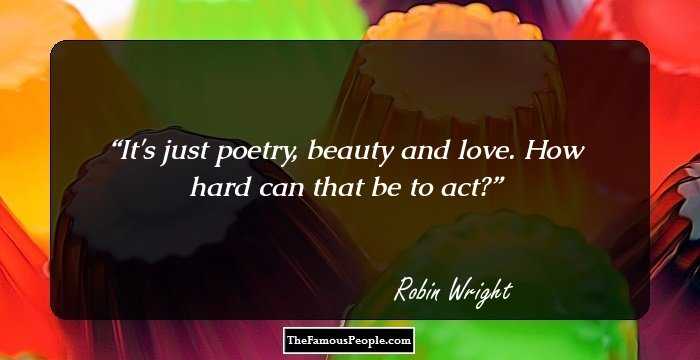 Personal Life & Legacy
She married Dane Witherspoon in 1986. This marriage was short-lived as they divorced within two years.
She entered into a relationship with actor Sean Penn in 1989 and had two children with him. The couple got married in 1996. They divorced in 2010 after 14 years of marriage.
Robin had a relationship with actor Ben Foster in 2012. They were engaged for a brief period of time. She then married Clement Giraudet, a ‘Saint Laurent’ executive, in a private ceremony in August 2018.
Robin is the honorary spokesperson for the nonprofit organization ‘The Gordie Foundation’ which is based in Texas. An advocate of human rights, she campaigns against multinational corporations and politicians of Democratic Republic of Congo for threatening human rights.

Quotes By Robin Wright | Quote Of The Day | Top 100 Quotes

See the events in life of Robin Wright in Chronological Order