Robert Reed Carradine is an American actor famous for playing Lewis Skolnick in the ‘Revenge of the Nerds’ films. Hailing from a family of actors, performing was in his veins. While he was still in high school, he, his paternal half-brother late David Carradine, and two others formed a musical quartet that entertained crowds at small clubs in Los Angeles and San Francisco. The transition from music to acting happened almost naturally and in 1971, he made his screen debut in an episode of the western-adventure ‘Bonanza’. A year later, he worked in his first movie as a cowboy named Slim Honeycutt in the John Wayne starrer ‘The Cowboys’. Despite the film witnessing a lukewarm response at the box-office, Carradine’s performance was well-received and it helped him bag his next project, Martin Scorsese’s ‘Mean Streets’. The 1976 comedy-romance ‘The Pom Pom Girls’ marked his first outing as a male lead. He would play the protagonist in several other films before being cast in ‘The Revenge of the Nerds’ in 1984. He is also known for portraying the fathers of Lizzie McGuire and Max Keeble in his more recent projects. 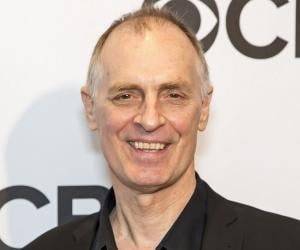 American People
California Actors
Tall Celebrities
Tall Male Celebrities
Aries Actors
Childhood & Early Life
Born on March 24, 1954, in Hollywood, California, Robert Carradine is the youngest son of actor John Carradine and actress and artist Sonia Sorel. He has two older brothers, Christopher and Keith; two paternal half-brothers from John’s marriage to Ardanelle Abigail McCool, Bruce (adopted) and David; a maternal half-brother from Sonia’s marriage to Beat painter Michael Bowen, also named Michael Bowen; and two stepbrothers from John’s marriage to Doris Rich, Dale and Michael (adopted).
When Robert was two years old, his parents divorced and subsequently, an acrimonious custody battle ensued. He, along with Christopher and Keith, was put in a home for abused children as wards of the court during the proceedings. Keith Carradine later compared the experience to imprisonment. John eventually won, gaining the custody of his children.
Robert was primarily raised by his father’s third wife, Doris Rich, and for a long while, believed her to be his mother. It was at a Christmas party when he was 14 years old, that he was introduced to Sorel. Keith later took him aside and explained who she was.
When he was a high school student, he moved in with David in Laurel Canyon, California, where he developed his lifelong interests in race-car driving and music.
Continue Reading Below
You May Like

The Best Black Actresses Of All Time
Career
Beginning his career in the 1971 episode ‘A Home for Jaime’ of NBC’s ‘Bonanza’ and then appearing in his first film ‘The Cowboys’, Robert Carradine demonstrated his acting pedigree with solid performances. He also played Sonny Jim, the mute companion of Serenity Johnson, portrayed by John Carradine, in his brother David Carradine’s legendary TV show ‘Kung Fu’ (1972).
In ‘Mean Streets’ (1973), he worked with Robert De Niro and Harvey Keitel. Later, he returned to the role of Slim Honeycutt in the TV adaptation of ‘The Cowboys’ (1974). Produced by Warner Brothers, the show aired 12 episodes on ABC before its early cancellation.
After a series of small roles in both films and TV shows, he starred as the male lead Johnnie in the romantic-comedy ‘The Pom Pom Girls’. The film was based on a story by its director Joseph Ruben and journalist Robert J. Rosenthal.
In the ensuing years, Carradine was cast in a wide range of roles. He portrayed a car racer in ‘Cannonball’ (1976), a salmon fisherman in ‘Joyride’ (1977), American criminal and outlaw Edward Ewing Younger in ‘The Long Riders’ (1980), an American soldier fighting in World War II in ‘The Big Red One’ (1980), a novelist-cum-boxer in ‘The Sun Also Rises’ (1984), prominent American anti-Vietnam War protest leader Rennie Davis in ‘Conspiracy: The Trial of the Chicago 8’ (1987), and a guardian angel in ‘Clarence’ (1990).
The 1993 horror comedy anthology television film ‘Body Bags’ features Carradine as a serial killer. He was also part of the television miniseries ‘The Tommyknockers’ (1993), which was based on Stephen King’s novel of the same name. In the dystopian science fiction ‘Escape from L.A.’ (1996), he played a skinhead. He co-starred with Caroline Rhea and Matthew O'Leary in the comedy horror ‘Mom's Got a Date with a Vampire’ (2000).
From 2001 to 2004, he was cast as Samuel McGuire, father of the eponymous character (Hilary Duff) in the teen sitcom ‘Lizzie McGuire’. A film, ‘The Lizzie McGuire Movie’, based on the show was released in 2003. Carradine alongside the rest of the cast reprised their respective roles.
He worked in Disney’s comedy film ‘Max Keeble's Big Move’ (2001) as Donald Keeble. Recently, he made a cameo appearance in Quentin Tarantino’s ‘Django Unchained’ (2012), hosted reality competition series ‘King of the Nerds’ (2013-15) with his ‘Revenge of the Nerds’ co-star Curtis Armstrong, and appeared in an episode of ‘Celebrity Wife Swap’ (2015).
Major Works
Robert Carradine is best known for his performance in the film ‘Revenge of the Nerds. Directed by Jeff Kanew, the film marked a milestone in American cinematic history and was a perfect example of the popular culture of the 1980s. Carradine portrayed Lewis Skolnick, an over-optimistic college freshman who, over the course of the film, embraces the notion that he is really a nerd.
Carradine reprised the role in all three sequels of the original ‘Revenge of the Nerds’: ‘Revenge of the Nerds II: Nerds in Paradise’ (1987), ‘Revenge of the Nerds III: The Next Generation’ (1992), and ‘Revenge of the Nerds IV: Nerds in Love’ (1994).
Continue Reading Below
Awards & Achievements
Robert Carradine received his first acting award nomination in 1982 for a Genie Award for Best Performance by a Foreign Actor for portraying the character Stanley Howard in ‘Heartaches’ (1981).
For ‘As Is’ (1986), he received a CableACE Award nomination in 1987.
In 1998, Robert, along with his brothers Keith and David, was honoured at the 16th Annual Golden Boot Awards.
Personal Life
Robert Carradine has a daughter, actress Ever Carradine (born on August 6, 1974), from his relationship with horse trainer’s assistant Susan Snyder. After their break-up, he raised her on his own.
In 1989, he met Edith or Edie Mani whom he married in 1990. They have two children together, Marika Reed (May 2, 1990) and Ian Alexander (November 14, 1992).
On March 12, 2015, Carradine got into a major car accident in Colorado when he crossed the dividing line and collided with a semi-truck. After the fire-fighters arrived at the spot and removed him from the wreck, he was rushed to a nearby hospital. Mani, who was in the car with him, suffered multiple injuries as well.
In November 2015, Carradine filed for divorce from Mani after 25 years of marriage. In the legal proceedings, Mani claimed that Carradine had confessed to her and their two children previously that he had deliberately veered the car “across the highway and into a full sized semi-truck” in order to kill her. She further stated that Carradine, who has driven race cars professionally and wasn’t intoxicated, would not lose control of the vehicle so easily.
In response, Carradine admitted that he had been in a psychotic state at the time of the accident, but claimed that it was due to his wife’s refusal to give him his bipolar medications.
Trivia
From his father’s side, Carradine has English, Dutch, and Irish ancestry. He is the direct descendant of Dutch diamond and pearl merchant Kiliaen van Rensselaer, who was one of the founders of the Dutch East India Company.

See the events in life of Robert Carradine in Chronological Order