Ricki Lake is an American actress, Emmy Award winning television host and a producer. She is best known for starring as Tracy Turnblad in the movie ‘Hairspray’ and for compering her day time talk show which was aired internationally for many years. She moved to Los Angeles to enrich her acting career and even underwent remarkable physical transformation—she reduced her weight in order to bag roles. She followed up the success of ‘Hairspray’ by starring in other movies like ‘Cry-Baby’ (alongside Johnny Depp and Susan Tyrrell), ‘Cecil B. Demented’ (along with Melanie Griffith and Stephen Dorff), and ‘Serial Mom’ (with Kathleen Turner and Sam Waterston). She also featured in ‘Mrs. Winterbourne’ with Shirley MacLaine and Brendan Fraser, ‘Cabin Boy’, ‘Last Exit to Brooklyn’, ‘Cookie’, and ‘Inside Monkey Zetterland’. She also received tremendous success for her talk show which lasted for eleven seasons. Later, she started another talk show that aired on weekdays. However, the show was cancelled after a single season. Recently, she worked on a documentary titled ‘Sweetening the Pill’ which features the hazards of hormonal birth control on women. In personal life, she was married to Rob Sussman and Christian Evans. From her former marriage to Rob, she has two sons American People
Actresses
T V & Movie Producers
American Women
New Yorkers Actresses
Childhood & Early Life
Ricki Lake was born on September 21, 1968 in Hastings-on-Hudson, New York. Her father, Barry, was a pharmacist and her mother, Jill, was a homemaker. She was mostly brought up by Sylvia Lake, her paternal grandmother.
After watching a show of ‘Annie’ at the age of seven, she decided to be a singer and actress. Nevertheless, her parents tried to shield her from the possible disappointments of showbiz.
Though she was keen on acting, she was a plump child with braces, and hence not suitable for glamorous roles. For a brief period, she attended the Professional Children's School in Manhattan for acting. 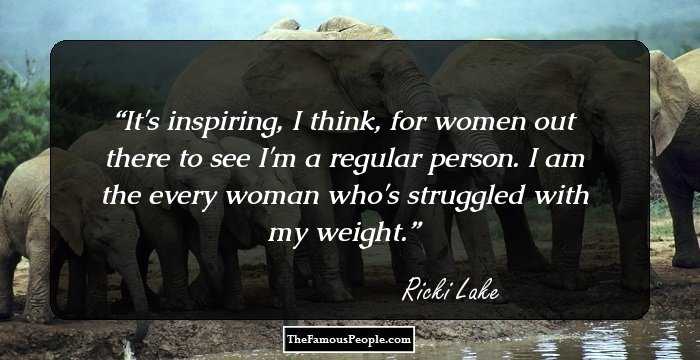 Quotes: Think, Women
Continue Reading Below
Career
While Ricki Lake was in the freshman year of her college, fate had something pleasant in store for her. Director John Waters was searching for a young girl with a large girth and dancing skills to star in his movie 'Hairspray' Ricki fit the bill perfectly and was chosen for the role. The film was released in 1988 and went on to become a cult-classic.
In 1988, she decided to move to Los Angeles in order to give a fillip to her active career.. She played minor roles in ‘Cookie’ (1989), ‘Last Exit to Brooklyn’ (1989) and ‘Cry-baby’. However, soon she found it difficult to land roles because of her weight.
She desperately needed a physical transformation and hence started a strict diet and exercise regime. By 1993, she had lost almost half her weight. Armed with a new found self-confidence, she auditioned for a television talk show for young women, emphasizing on relationships and dating. She got the job and at age 24, she became the youngest host in talk show history—a record which was later broken in 2013.
Alongside, she also acted in movies like ‘Serial Mom’ (1994), which flopped in the box office and ‘Mrs. Winterbourne’, in 1996. In 2004, the ‘Ricki Lake’ show came to an end.
Following the wrap-up of her talk show, she hosted the CBS limited series ‘Gameshow Marathon’ in 2006. The show was a reinvention of classic game shows played with celeb participants.
In 2007, she performed in the television movie ‘Matters of Life and Dating’. The same year, she also played the role of a talent agent in the remake of the cult-classic ‘Hairspray’ and sang the song "Mama I'm A Big Girl Now" which is played at the film's end credits.
In 2008, her documentary film on home birth and midwifery, ‘The Business of Being Born’ was released. It contained a recording of her experience about giving birth and the regular work of a midwife.
She co-authored a book on normal delivery and birthing choices, along with Abby Epstein and Jacques Moritz titled ‘Your Best Birth’, published in 2009. This was followed by the launch of an online social network ‘MyBestBirth.com’.
In 2009, she hosted the third season of VH1's ‘Charm School’. The next year, she appeared as a guest on The Oprah Winfrey Show.
Continue Reading Below
In 2012, she hosted ‘The Ricki Lake Show’ which was similar to ‘The Oprah Winfrey Show’. She also won the Daytime Emmy for Outstanding Talk Show Host in 2013. However, the show was discontinued after a single season.
In 2014, she worked with director Abby Epstein on a documentary about the risks of hormonal birth control, titled ‘Sweetening the Pill’, based on a book of the same title, authored by Holly Grigg-Spall. 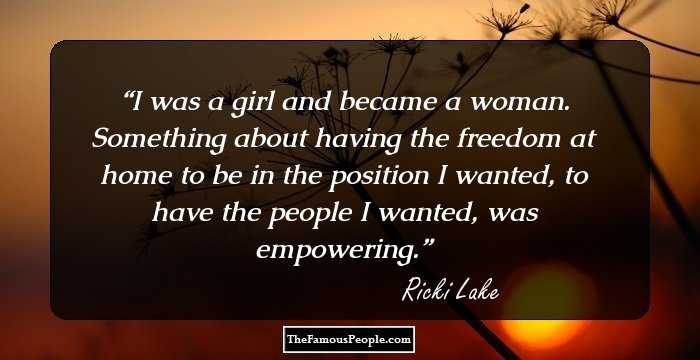 Quotes: Home
Major Works
She debuted in 1988 as Tracy Turnblad in a musical, romantic comedy film directed by John Waters called ‘Hairspray’. Her character was a shellacked hair, obese adolescent girl who finds empowerment through a television dance show.
In 1993, her first daytime talk show ‘Ricki Lake’ was aired. At 24, she became the youngest person at the time to host a talk show. The show’s unparalleled success was a result of her unconventional take on controversial subjects like sexually transmitted diseases, infidelity, teenage pregnancy, and her adept incitement of passionate spectators.
‘The Business of Being Born’ her documentary film on home birth and midwifery was released in 2008. Apart from showing the work of a midwife, it contained footage of Lake’s experience in giving birth.
Awards & Achievements
In 1993 at the age of 24, she became the youngest person at the time to host a television talk show.
In 2013, she won the Daytime Emmy Awards for ‘The Ricki Lake Show’ in ‘Outstanding Talk Show Host’ category. 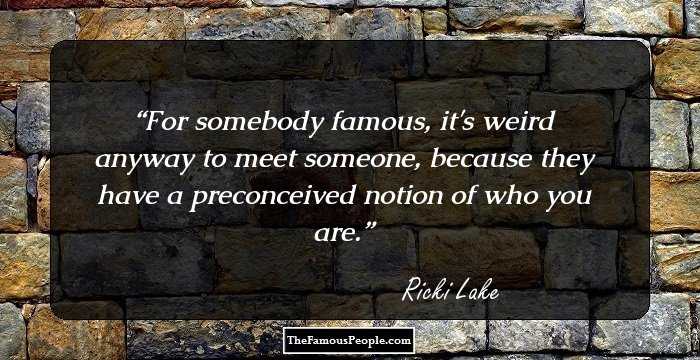 Quotes: You
Personal Life & Legacy
Ricki Lake met Rob Sussman in 1993 and the couple married the next year. They have two sons: Milo and Owen. The couple divorced in 2005.
She began dating Christian Evans in 2009. The couple got married in 2012 and divorced two years later.
In 2007, she mentioned sexual exploitation in her childhood as a cause for her obesity.
Trivia
In 2010, her rented home in Malibu caught fire. She and her sons however, escaped unharmed.

See the events in life of Ricki Lake in Chronological Order