(Regarded as the Greatest Professional Wrestler of All Time)

Advanced Search
Popularly known by the moniker ‘The Nature Boy’, Ric Flair is a retired professional wrestler most famous for his extravagant lifestyle with an addiction to alcohol and women. He was once the face of National Wrestling Alliance (NWA ) and World Championship Wrestling (WCW) and is regarded as one of the greatest wrestlers of all time. The first ever WCW champion, Flair has held the World Championship for a record 16 times. His tumultuous life involves strained relationship with his adoptive parents, multiple injuries, four failed marriages, and the heart-breaking loss of a son. In a career spanning over 40 decades, he has broken several records and created new records by winning numerous championships. Flair has seen the highest of highs and the lowest of lows in a wrestlers’ career but is still unwilling to ‘retire’ from this sport as he considers wrestling to be his first love. It is his sheer passion for wrestling that prompted him to wrestle for Total Nonstop Action Wrestling (TNA) even years after officially retiring from wrestling. However, he later admitted that wrestling for TNA was his ‘number one’ regret of his career. Flair is now often seen in WWE in support of his daughter Charlotte. American People
American Men
University Of Minnesota
Tall Celebrities
Tall Male Celebrities
Childhood & Early Life
Ric Flair was born Fred Phillips on February 25, 1949, in Memphis, Tennessee, to Luther and Olive Phillips. However, he was later adopted from the Tennessee Children’s Home Society by Richard Reid Fliehr and Kathleen Virginia Kinsmiller and was named Richard Morgan Fliehr. His adoptive father worked as a physician while his adoptive mother was an actress.
He then moved with his new family to Edina, Minnesota, where he attended the Wayland Academy. In school, he was an active sportsman with keen interest in football, track and wrestling.
He became an amateur wrestler even before enrolling with the University of Minnesota on a football scholarship and dropped out of college soon after completing his freshman year. While working as a bouncer at a club, he happened to meet Olympic weightlifter, Ken Patera, who introduced him to American Wrestling Association (AWA) promoter, Verne Gagne. Gagne agreed to take Flair under his wing and had him registered as a member of his training class. 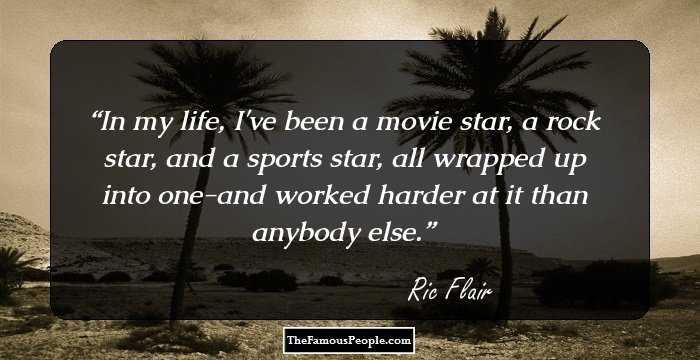 Quotes: Life
Continue Reading Below
Career
In 1971, Richard Morgan Fliehr joined Gagne's wrestling camp which was set-up at Gagne’s barn outside Minneapolis. He trained along with Gagne’s son Greg Gagne, Jim Brunzell, The Iron Sheik and Ken Patera.
He took up the ring name ‘Ric Flair’ and had his first match against George "Scrap Iron" Gadaski in December 1972 in Rice Lake, Wisconsin. The match ended up in a 10-minute draw.
Flair quit AWA and joined the National Wrestling Alliance (NWA) in 1974. He bagged his first singles title on February 8, 1975 after he beat Paul Jones for the NWA Mid-Atlantic TV Championship.
On October 4, 1975, Flair along with Johnny Valentine "Mr. Wrestling I" Tim Woods, Bob Bruggers, and promoter David Crockett boarded a plane which crashed in Wilmington, North Carolina. The crash killed the pilot and severely injured the rest. Flair, who was 26 years old then, suffered a back injury and was told that he would not be able to wrestle ever again.
Flair, however, decided not to give up and underwent a lot of physical therapy to be able to get back on his feet. His efforts paid off and he was back in the ring within a year of the accident.
On his return, he wrestled Wahoo McDaniel in February 1976. But the accident compelled him to change his wrestling style and had to give up on his power brawling techniques.
On July 29, 1977, Ric Flair won the ‘NWA United States Heavyweight Championship’ after defeating Bobo Brazil. Over the next three years, Flair regained the championship five times against opponents such as Ricky Steamboat, Roddy Piper, Mr. Wrestling, Jimmy Snuka and Greg Valentine.
In 1978, he was pitted against the original ‘Nature Boy’ Buddy Rodgers. In order to fuel his rivalry with Rodgers, Flair started calling himself ‘The Nature Boy’ and the nickname stuck with him thereafter.
Flair beat Dusty Rhodes to win his first ‘NWA World Heavyweight Championship’ on September 17, 1981. He became the face of NWA with his blonde hair, bejewelled robes, expensive jewellery and designer suits.
Continue Reading Below
He then developed his own unique style of taunting opponents by shouting “Woooo!” during a match which eventually became his trademark.
Flair held the championship belt for over two years before losing it to Dusty Rhodes on July 26, 1986 at The Great American Bash.
In early 1985, Ric Flair along with the tag team of Ole Anderson and Arn Anderson launched attacks against Rhodes. A few weeks later, they were joined by Tully Blanchard and together they formed the group named ‘Four Horsemen’. This villainous alliance was created to become a formidable force by destroying NWA’s crowd favourites and capturing all the main titles.
Over the years, Four Horsemen saw several changes with several members joining and quitting the group. Flair and Arn Anderson were the only two permanent member on the group which saw the addition of wrestlers such as Lex Luger, Barry Windham, Sting, Sid Vicious, Paul Roma, Brian Pillman, Chris Benoit, Jeff Jarrett, Steve McMichael, Curt Hennig, and Dean Malenko.
In early 1991, WCW president Jim Herd suggested Flair undergo a look change and adopt the new name ‘Spartacus’. Flair refused to follow the suggestion which prompted Herd to fire him and strip him of the NCW championship.
Flair joined the World Wrestling Federation (WWF) in August 1991. He initially appeared with the ‘Big Gold Belt’ calling himself ‘The Real World Heavyweight Champion’ and went on to challenge WWF stars such as Roddy Piper and Hulk Hogan.
Flair won his first WWF Championship on January 19, 1992 by defeating 29 other wrestlers in the Royal Rumble match. He eventually lost his championship to Bret Hart on October 12, 1992.
After his short stint at WWF, Flair returned to WCW February 1993 as the new face of the brand. He won the NWA World Heavyweight Championship after defeating Barry Windham at Beach Blast. However, he held onto the belt for a very short period as WCW left the NWA in September 1993.
In June 1994, Flair became the unified WCW International World Heavyweight and the WCW World Champion by defeating Sting.
Continue Reading Below
Flair also became the flag bearer of the ‘New World Order’ in late 1996 and remained so throughout 1997. He and his fellow Horsemen took on wrestling biggies such as Scott Hall, Kevin Nash, and Hulk Hogan.
Ric Flair won the WCW World Championship twice during 2000 till the company was taken over by WWF in 2001.
Flair then took a short break from wrestling and returned to WWF in November 2001. As per the storyline, Flair was the the on-camera co-owner of WWF after Shane and Stephanie sold their stock in the company to him. He eventually lost his on-camera ownership to Vince McMachon.
In 2003, Flair joined the ‘Evolution’ comprising of WWE superstars, Triple H, Randy Orton and Dave Batista. Along with Batista, Flair won the World Tag Team Championship twice in 2003 and 2004.
Flair was inducted into WWE Hall of Fame March 29, 2008, and was the first active wrestler to be inducted into the Hall Of Fame.
He retired from wrestling on March 30, 2008 after losing a match to Shawn Micheals at WrestleMania XXIV in Orlando, Florida. However, he does make occasional appearances in WWE especially to support his daughter Ashley who goes by the ring name ‘Charlotte’. 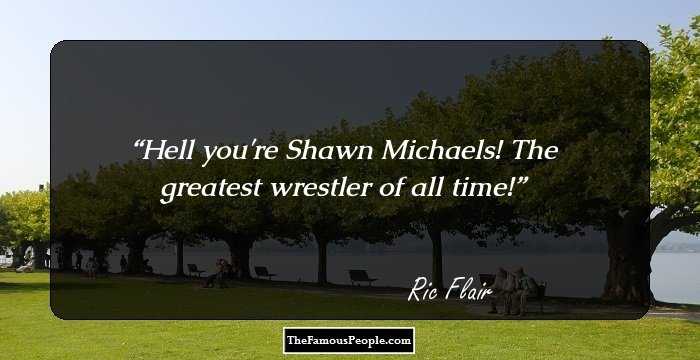 Awards & Achievements
Ric Flair is the only two-time inductee of the WWE ‘Hall of Fame’. The first time he was inducted with the class of 2008 for his contribution to wrestling as an individual wrestler and the second time in 2012 as one of the members of the team ‘The Four Horsemen’.
Personal Life & Legacy
Ric Flair first married Leslie Goodman on August 28, 1971. Together the couple had two children Megan and David. They parted ways in 1983 after being together for 12 years.
In the same year on August 27, 1983, Flair married Elizabeth Harrell. The couple had two children together Ashley and Reid. Elizabeth even appeared on WCW on several occasions. The couple, however, separated in 2006.
On 27 May 2006, Flair married Tiffany VanDemark. But their marriage was short-lived and their divorce was finalised in 2009.
Following the same trend, Flair went on to marry his fourth wife in the same year as his divorce with VanDemark. He tied the knot with Jacqueline "Jackie" Beems on November 11. However, this marriage too did not last long and the couple officially separated in 2014.
Flair got engaged to his girlfriend Wendy Barlow in July 2016. 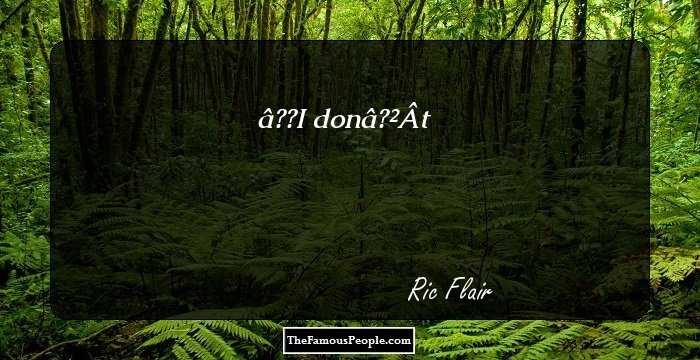 Quotes: Think, I
Trivia
During 1986, wrestling promoter Jim Crockett tried to expand NWA nationally and promoted the brand with Ric Flair being the face of the company and created a custom championship belt for Flair.
In his autobiography, he stated that he felt devastated after his young son, Reid, died from an accidental overdose of heroin, Xanax and a muscle relaxer on March 29, 2013.

See the events in life of Ric Flair in Chronological Order