Quin Baron is an American child actor who became famous after he started acting in television soaps at a very early age of less than one. He has been appearing with his twin brother in many such serials produced by NBC, CBS and CW Network and. His young age and acting talent has attracted many producers who want him and his twin brother to act in their serials. Sometimes directors of movies and serials find it difficult when filming the acting of small kids as they tend to look at the camera or become busy with themselves. This leads to the increase in the number of takes to get the correct shot. This has never been the problem with Quin and his twin brother who are not at all camera shy. The twin brothers have become very popular in the entertainment industry as the actors and crew on the sets find it very easy to work with them even though they are very small kids. American People
Male Child Actors
American Child Actors
American Film & Theater Personalities
Scorpio Male
The Meteoric Rise To Stardom
Quin Baron first appeared on January 18, 2008 in one of the episodes of the soap named ‘The Young and the Restless’ in the role of Baby Reed. The next year he appeared in the role of Baby Matt Parkman in the serial ‘Heroes’ and in four episodes of ‘Californication’ in the role of Sturat Runkle. He and his twin brother have also appeared in few episodes of serials ‘Surviving Suburbia’ in 2009, ‘According to Jim’ and a serial produced by ABC titled ‘Modern Family’. He and another child actor named Blake Tuomy Wilhoit have appeared together with their twin brothers in various television serials. The Baron twins are scheduled to appear in the 5th season of ‘Califonication’.
You May Like

The Best Black Actresses Of All Time
Continue Reading Below
What Makes Quin Baron So Special
There are very few celebrities like Quin Baron who have entered the entertainment industry at the age of only one and have made quite a name for themselves within a short period of time. Along with his twin brother, Quin has hit the headlines repeatedly with his appearance in a quite a few television serials. His acting talent can easily inspire other youngsters who want to become actors and actresses. The very early age at which Quin started acting serves as a great encouragement for many kids who think they have an inherent talent for appearing on the stage or in front of the camera. Many producers think that making a movie on a kid requires twins as they can give shots very quickly. This makes the Quin brothers ideal for such projects as they both have the same kind of talent for acting normally for long durations. It also makes them special to directors who expect small kids to be problematic as they usually do not want to do what they ask them to do. In this sense Quin and his twin brother Reed have become very popular as they are very responsive to the director’s requests and do as they are told. This helps the director to complete his shots with very few takes.
Beyond Fame
Quin Baron is still too young to get involved in any unpleasantness which normally occurs to celebrities when they are older. He is still a small kid whose social media sites are handled by his parents. He does not correspond with his fans directly or make any controversial statements on the social media or in public. His father being the owner of a talent search agency helps Quin to get his roles without having to try on his own. At this moment he is under the care of his parents and growing up just like any other kid in his neighborhood. He is highly enthusiastic about acting in many more television serials.
Behind The Curtains
Quin Baron was born Quinn Marshall Baron in Los Angeles California, United States, on November 16, 2007. He has a twin brother named Reed and both of them have grown up in Los Angeles. His father, Rod Baron had also been a child actor and grew up in the industry to form a talent search agency for representing actors and actresses who have a talent for acting. The help from his father helped Quin and his twin brother land roles in various serials and soaps which made them quite famous. 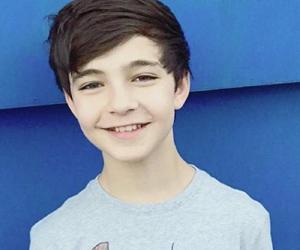