Advanced Search
Pharrell Williams is an American singer and songwriter who gained recognition for his Oscar-nominated hit song ‘Happy.’ Also a record producer and film producer, he produced the 2016 biographical drama film ‘Hidden Figures.’ The film, which was based on a book of the same name, turned out to be a huge hit and won several awards, such as ‘Hollywood Film Award.’ It also received three ‘Oscar’ nominations. Also a successful businessman, Williams has been involved with several corporations, such as ‘Adidas’ and ‘Moncler.’ He has been a music enthusiast since childhood. Along with his friend Chad Hugo, he started performing from an early age. He then formed a record production duo named ‘The Neptunes’ with his friend. ‘The Neptunes’ became popular when they started producing the works of rap artists, such as Ol' Dirty Bastard and Jay-Z. They also became known for their work in ‘Justified,’ which is the debut studio album of popular American singer Justin Timberlake. Williams’ solo debut studio album ‘In My Mind’ was released in 2006. Debuting at number three on the ‘US Billboard 200,’ it is amongst his most successful works. In 2014, he released his second album ‘Girl’ which also turned out to be a huge hit. Taylor Swift
5th April In History
DID WE MISS SOMEONE?
CLICK HERE AND TELL US
WE'LL MAKE SURE
THEY'RE HERE A.S.A.P
Quick Facts

American People
Record Producers
Lyricists & Songwriters
American Men
Virginia Musicians
Childhood & Early Life
Pharrell Williams was born on 5 April 1973, in Virginia Beach, Virginia, United States. His father’s name is Pharaoh and his mother’s name is Carolyn. They have three children, Pharrell being the oldest.
He attended ‘Princess Anne High School’ and ‘Kempsville High School.’ When he was in his seventh grade, he became acquainted with Chad Hugo with whom he later formed ‘The Neptunes.’ He would later state in interviews that he used to be different from the average kid, and that he was a nerd. 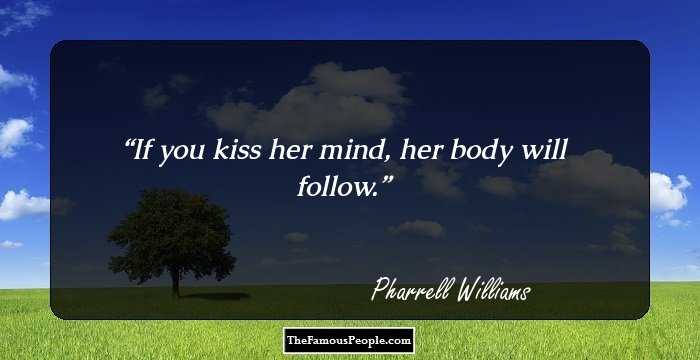 Quotes: You, Will
Continue Reading Below
Career
In the 1990s, Pharrell Williams performed with Chad Hugo and the duo formed the record production team ‘The Neptunes.’ They successfully contributed to the works of several artists in the late-1990s as well as in the 2000s. They became known for producing hit songs, such as ‘I Just Wanna Love U’ by Jay Z and ‘I’m a Slave 4 U’ by Britney Spears.
After a few other successful works, they released an album titled ‘The Neptunes Present… Clones’ in 2003. The album peaked at the first position on the ‘US Billboard 200.’ It also received mostly positive reviews. The album included ‘Frontin,’ Pharrell’s debut solo single, which peaked at the fifth position on the ‘US Billboard Hot 100.’ It also became the 34th best-selling song in the country for 2003.
Williams’ debut studio album ‘In My Mind’ was released in July 2006. It turned out to be quite successful. It debuted at third position on the ‘US Billboard 200.’ Even though several songs from the album had been leaked on the internet before its release, the album successfully sold over 142k copies within the first week of its release.
For the next few years, he collaborated with several well-known singers, such as Shakira and Jennifer Lopez. He was credited as a co-writer and producer for Lopez’s hit song ‘Fresh Out the Oven.’
In 2010, he composed the soundtrack for the popular animated comedy movie ‘Despicable Me.’ The following year, he collaborated with American singer Adam Lambert with whom he co-wrote two tracks for Lambert’s second studio album ‘Trespassing.’ He also composed as well as produced the music for the 84th ‘Academy Awards.’
In the year 2013, Pharrell Williams composed the soundtrack for the animated film ‘Despicable Me 2,’ which served as the sequel to ‘Despicable Me.’ His song ‘Happy,’ which was written for the film, became a huge hit. Not only did it peak at the first position on the ‘US Billboard Hot 100,’ but the song also won an ‘Oscar’ nomination. It also served as the lead single of his second album ‘Girl.’
His second studio album ‘Girl’ released in March 2014. Peaking at number one in 12 different countries, the album became a huge success. It sold 591k copies in the US within a year. It received mostly positive reviews from critics.
The same year, Williams was also announced as the new coach in the popular TV singing competition ‘The Voice.’ In 2014, Williams also served as a co-composer for the soundtrack of the hit superhero movie ‘The Amazing Spiderman 2.’
In 2016, he was a producer as well as composer for the popular biographical drama film ‘Hidden Figures.’ The film was a huge success, and received an ‘Oscar’ nomination.
Continue Reading Below
The following year, he served as the composer of the third installment of the ‘Despicable Me’ series, ‘Despicable Me 3.’ The film turned out to be a blockbuster. The same year, he also designed 1000 pairs of sneakers in collaboration with ‘Chanel’ and ‘Adidas.’
In 2018, he narrated the 3D computer animated movie ‘The Grinch.’
In early 2019, Williams launched a three-day music festival called ‘Something in the Water,’ with many renowned artists performing on the Virginia Beach Oceanfront.
In his third collaboration with German composer Hans Zimmer, Pharrell produced five songs for the 2019 epic hit musical film ‘The Lion King.’ 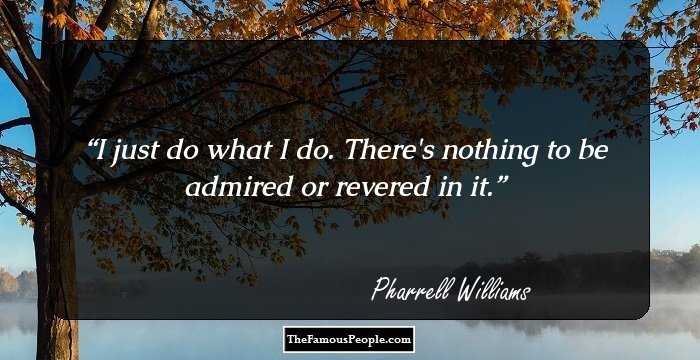 Quotes: I
Major Works
‘In My Mind,’ which was Pharrell Williams’ first album, is among the most significant works of his career. Debuting at number three on the ‘US Billboard 200,’ the album was a commercial success, and sold 142k copies in its first week. The album included tracks, such as ‘Can I Have It Like That,’ ‘How Does It Feel,’ ‘Best Friend,’ and ‘Angel.’ The album was also a huge success in other countries, peaking at eighth position on the ‘Canadian Albums,’ and third position on the ‘Dutch Albums.’
‘Girl,’ the second studio album by Pharrell Williams, is also among his most successful works. The album peaked at the second position on the ‘US Billboard 200.’ Along with the Oscar-nominated song ‘Happy,’ which served as the lead single of the album, it also included singles, such as ‘Gust of Wind’ and ‘Hunter.’ It was also quite successful in other countries, peaking at the first position on the ‘UK Albums’ and ‘Norwegian Albums.’ It received mostly positive reviews.
Williams is the co-producer of the popular biographical drama film ‘Hidden Figures’ which released in 2016. The film, which was based on a non-fiction book of the same name by Margot Lee Shetterly, was directed by Theodore Melfi. It starred actors like Taraji P. Henson, Octavia Spencer, and Kevin Costner. The film turned out to be a commercial success, and grossed more than $230 million worldwide. The film received several awards, as well as three ‘Oscar’ nominations. It received mostly positive reviews.
Awards & Achievements
Pharrell Williams is the winner of 13 ‘Grammy Awards,’ and six ‘Billboard Music Awards’ among other awards. He has also received two ‘Academy Award’ nominations.
In 2014, he won two ‘BBC Music Awards’ under the ‘International Artist of the Year’ and ‘Song of the Year (Happy)’ categories.
In 2015, he won the ‘People's Choice Award’ for ‘Favorite R&B Artist.’
Personal Life
In 2013, Pharrell Williams married Helen Lasichanh, a model and designer. They have a son named Rocket Williams who was born in 2008. In 2017, the couple had three more children, a set of triplets.

See the events in life of Pharrell Williams in Chronological Order