Patrick Stewart is a prolific actor who has made a name for himself through his work on the stage, sitcoms and the Broadway. Though he proved his might as an actor in television serials and films, he always harboured a great deal of passion towards the Shakespearean theater, where he spent most of his career. He was relentless in achieving his success as an actor and the mockery he faced from the people for being bald did not discourage him in his pursuit. His role as ‘Captain Jean-Luc Picard’ in ‘Star Trek: The Next Generation’ lasted for seven seasons. His later role as ‘Professor Charles Xavier’ in the ‘X-Men’ took his career to great heights. He is a versatile actor who has played many roles and has won the Emmy Award apart from winning many other awards. He is the recipient of the ‘Officer of the Order of the British Empire’, the highest honor received by an actor from Queen Elizabeth II. He is the patron of ‘Refuge’ a UK based charitable organization for abused women. Stewart’s lucid and commanding voice earned him popularity even in the field of voice acting, especially as the voice of ‘Emperor Uriel Septim VII’ in ‘The Elder Scrolls IV: Oblivion’, a video game. British People
British Men
Cancer Actors
British Actors
Actors Who Are In Their 80s
Childhood & Early Life
Patrick Stewart was born on July 13, 1940, to Gladys, a weaver and Alfred Steward, a Sergeant Major in the British Army. His siblings include Geoffrey and Trevor, both of whom are elder to him. He had a troubled childhood and witnessed physical abuse inflicted on his mother by his father.
He was educated at ‘Crowlees Church of England Junior and Infants School’ and later at ‘Mirfield Secondary Modern School’.
Cecil Dormand, an English teacher, at ‘Crowlees Church of England Junior and Infants School’ nurtured his acting talent and persuaded him to act in Shakespearean plays.
Acting became a passion for Stewart when he was just 12 and he performed in local drama groups. At the age of 15, he worked as a junior reporter and obituary writer for ‘Mirfield & District Reporter’, but quit the job when the editor of the newspaper asked him to choose between writing and acting.
He worked as a furniture salesman for a year to save money to get into a drama school. After saving enough money, he attended an eighty day drama course. 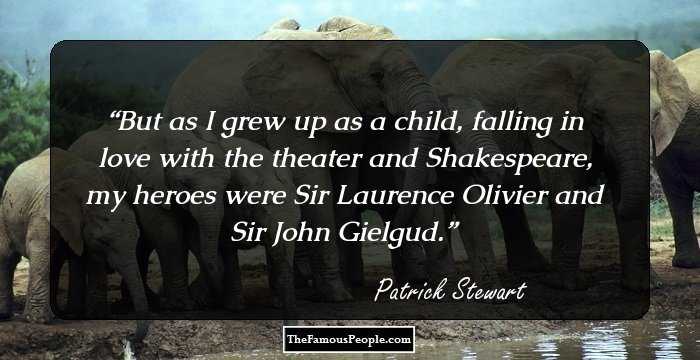 Quotes: Love
Continue Reading Below
Career
In 1957, he enrolled at Bristol Old Vic Theatre School. He made his professional debut a couple of years later, at the repertory theatre in Lincoln and then at the ‘Manchester’s Library Theatre’.
In 1966, he joined the ‘Royal Shakespeare Company’ and remained associated with the company till the early 1980s.
In 1971, he made his Broadway appearance as Snout in Shakespeare’s ‘A Midsummer Night’s Dream’. A couple of years later, he started performing in minor roles in the television serials and in British and American films.
In 1987, he went to Los Angeles and gained international popularity after he was cast as ‘Captain Jean-Luc Picard’ in the science-fiction series ‘Star Trek: The Next Generation (TNG)’ that ran for seven years until 1994.
The success he gained as ‘Captain Jean-Luc Picard’ earned him four more Star Trek films, namely, ‘Star Trek: Generations’, ‘Star Trek: First Contact’, ‘Star Trek: Insurrection’, and ‘Star Trek: Nemesis’ during the period spanning from 1994 to 2002.
His role as Professor Xavier in the ‘X-Men’, an American blockbuster film released in 2000, earned him great popularity and he acted in the two sequels of the film as well.
Owing to his impeccable British accent he received offers for lending his voice to comic cartoon characters in TV shows. He lent his voice to animated movies like ‘Gnomeo &Juliet’, released in 2011 and ‘Ice Age: Continental Drift’, released in 2012.
Though he has established himself as a great actor in the Broadway Theater, Stewart still loves to perform at the Shakespearean Theatre, from where he was trained. 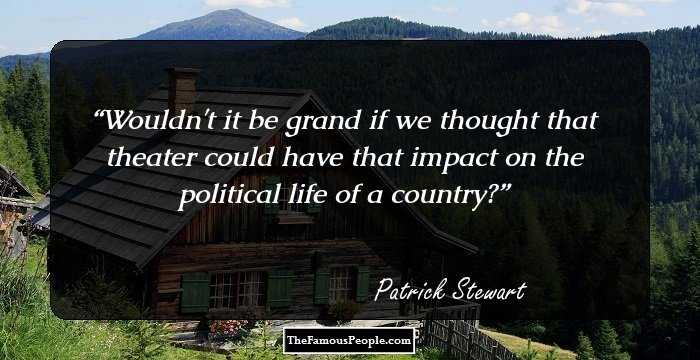 Quotes: Life
Continue Reading Below
Major Works
His role as ‘Captain Jean-Luc Picard’ in the science-fiction series ‘Star Trek: The Next Generation’ was a huge success and it ran for seven years from 1987-1994.
Among the audio recordings, his recording for ‘Peter and the Wolf ’garnered great appreciation and earned him several awards.
Awards & Achievements
He was the winner of the ‘Laurence Olivier Award’ in 1979, for his portrayal in ‘Antony and Cleopatra’, an RSC production.
In 1996, for his voice role in‘Peter and the Wolf’ he received a Grammy Award for ‘Best Spoken Word Album for Children’.
He was made an Officer of the Order of the British Empire (OBE) in 2001.
In 2010, he was made the Knight Bachelor by Queen Elizabeth II for his contribution to drama.. 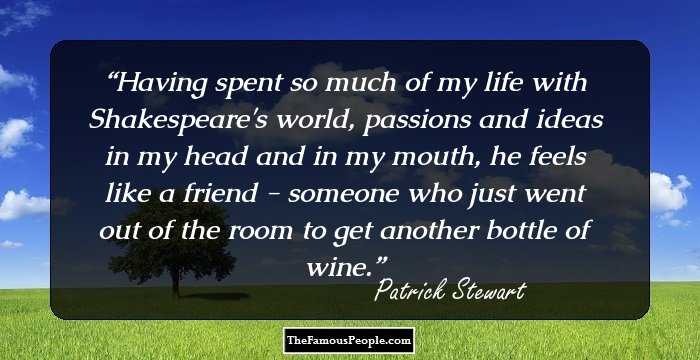 Quotes: Life
Personal Life & Legacy
He married Sheila Falconer, a choreographer in 1966 and the couple has two children, Sophia, who runs a boutique shop and Daniel, an actor.
After divorcing his first wife, he married Wendy Neuss, a producer, in 2000 and the couple got divorced in 2003.
His romantic affair with actress Lisa Dillon lasted from 2003 to 2007.
In 2013, he got married to Sunny Ozell, a singer from Brooklyn, New York.
Trivia
This British actor who gained popularity as ‘Captain Jean-Luc Picard’ became bald, at the young age of 18 due to alopecia.

Quotes By Patrick Stewart | Quote Of The Day | Top 100 Quotes

See the events in life of Patrick Stewart in Chronological Order