Advanced Search
Park Seo-joon is a South Korean actor who is best known for appearing in the TV series ‘She Was Pretty’, ‘Pots of Gold’, ‘Kill Me, Heal Me’, ‘One Warm Word’, ‘Hwarang: The Poet Warrior Youth’ and Fight for My Way. He has also acted in films like ‘Perfect Game’, ‘The Chronicles of Evil’, ‘Midnight Runners’ and ‘The Beauty Inside’. Besides these, Park has hosted the music program ‘Music Bank’ as well as the SBS Drama Awards. He has even worked in music videos for popular artists such as The One, and Kim Ji Soo. The South Korean actor is also known for showering love on his fans. He held his first ever fan meeting at Goyang Eoullimnuri Arts Center and greeted more than 2500 fans. Talking about Park’s awards and honours, he earned the ‘Best New Actor’ award at 2nd APAN Star Awards function for his performance in ‘Pots of Gold.’ He also won the ‘Best Style of the Year’ award at 7th Herald Donga Lifestyle Awards event. And there’s more to come! Park fetched the ‘New Star Award’ at the SBS Drama Awards function for his work in ‘One Warm Word.’ He has also received the MBC Drama Awards multiple times for his contribution to TV dramas ‘Kill Me, Heal Me’ and ‘She Was Pretty.’ Kim Woo-bin
DID WE MISS SOMEONE?
CLICK HERE AND TELL US
WE'LL MAKE SURE
THEY'RE HERE A.S.A.P
Quick Facts

South Korean People
Tall Celebrities
Tall Male Celebrities
Sagittarius Actors
Actors Who Are In Their 30s
Career
Park Seo-joon began his career in entertainment industry in 2011 when he appeared in the music clip of Bang Yong-guk's single titled ‘I Remember’. The same year, he appeared in the movie ‘Perfect Game’. After this, he did the TV series ‘Dream High 2’ and ‘Shut Up Family’. Then in 2013, the South Korean actor was cast in ‘Pots of Gold’, ‘Drama Festival’ and ‘One Warm Word’. During that year, he also hosted the music program ‘Music Bank’ for the network KBS2.
A year later, Park appeared as Yoon Dong-ha in the television drama ‘Witch's Romance’ as well as in The One’s music video. He also hosted SBS Drama Awards in 2014. In the year 2015, he did the movies ‘The Chronicles of Evil’ and ‘The Beauty Inside’ and also acted in the shows ‘Kill Me, Heal Me’ and ‘She Was Pretty’.
After this, Park worked in the TV series ‘Hwarang: The Poet Warrior Youth’. Then he was cast as Hwang Ki-joon in the flick ‘Midnight Runners’ and as Go Dong-man in the drama ‘Fight for My Way’ in 2017. Around this time, he also appeared in the music video for Kim Ji Soo’s song ‘Dream All Day’.
Recommended Lists:

South Korean Actors
South Korean Film & Theater Personalities
Sagittarius Men
Continue Reading Below
Personal Life
Park Seo-joon was born on 16 December 1988 in Seoul, South Korea. He has two younger brothers. He enlisted for his obligatory military service in 2008 at the age of 19 and was discharged in 2010. Besides this, no other information regarding the South Korean actor is available to the media. 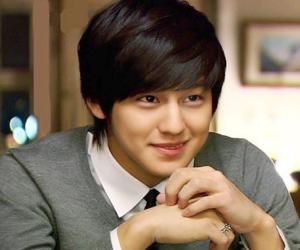