Advanced Search
Omar Khayyám was an extremely talented and famous Persian mathematician, astronomer, philosopher, and poet. It is believed that Omar adopted the name ‘Khayyám’ as a mark of respect for his father’s occupation. His work as an outstanding mathematician and astronomer led to the reform of the ancient Muslim calendar. Also, the theorems given by him are still applied in mathematics. Despite his work in mathematics and astronomy, Khayyam is best known for his poems. He is also known as the author of his collection of quatrains, the ‘Rubaiyat.’ Few know that he laid the foundation of modern algebra with his 1070 AD work, ‘Treatise on Demonstration of Problems of Algebra and Balancing.’ He also contributed to the development of non-Euclidean geometry. Reformation of the Persian solar calendar was another feather in his cap. The present-day Georgian calendar is partly based on his work. In addition, he also wrote numerous treatises on history, geography, mineralogy, mechanics, and music. He was also a great teacher as he taught mathematics and philosophy of Avicenna in the last decades of his life. Although he was a poet, he never published the ‘rubais’ that he wrote. Discovered after his death, the ‘rubais’ remained neglected until Edward Fitzgerald translated them to English, seven centuries after Khayyam’s death. Shams Tabrizi
DID WE MISS SOMEONE?
CLICK HERE AND TELL US
WE'LL MAKE SURE
THEY'RE HERE A.S.A.P
Quick Facts

Iranian People
Astronomers
Philosophers
Mathematicians
Iranian Men
Childhood & Early Life
Omar Khayyam was born Ghiyath al-Din Abu'l-Fath Umar ibn Ibrahim Al-Nisaburi al-Khayyami on 18 May 1048, in Nishapur, located at the foot of Binalud Mountain in northeastern Iran. A great trading post, Nishapur served as the capital city of Seljuq dynasty at the time of his birth.
Little is known about his family background. Based on the family title ‘Khayyami,’ it is generally assumed that he was born into a family of Muslim tentmakers. It is, however, not known if his father, Ibrahim Khayyami, pursued the family trade.
While many assume that Ibrahim was a tentmaker, some other biographers believe that he was an established physician. However, it is certain that he was aware of the importance of education and was religiously very unorthodox. Nothing is known about Omar’s mother.
Omar Khayyam received comprehensive education. One of his teachers, a Zoroastrian mathematician named Bahmanyar bin Marzban, taught him science, philosophy, and mathematics. Concurrently, he studied astronomy under Khawjah al-Anbari.
He also studied scripture with Imán Mowaffak of Naishápúr. It was here that he formed close friendship with Abu Ali Hasan ibn Ali Tusi, who was later appointed Vizier to the Seljuq Empire and came to be known as Nizam-al-Mulk.
It is not known when Khayyam was sent to the town of Balkh (present-day northern Afghanistan). It is speculated that he was sent to Balkh after completing his studies at Nishapur. At Balkh, he studied under a scholar named Sheikh Muhammad Mansuri. 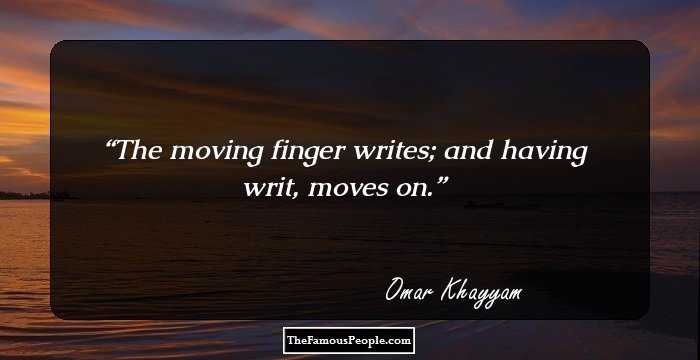 Continue Reading Below
In Samarkand
According to some biographers, after the death of his father, Omar Khayyam returned to Nishapur in 1066 to settle family affairs. After two years, he left for Samarkand, a center for scholarship, located in modern-day Uzbekistan.
After traveling for three months, he reached Samarkand, sometime in 1068. There he contacted Abu Tahir, a prominent jurist, who happened to be his father’s old friend. On observing Omar Khayyam’s extraordinary talent in mathematics, Tahir employed him in his office.
Working under Tahir’s patronage, Khayyam wrote ‘Treatise on Demonstration of Problems of Algebra and Balancing’ in 1070. In the treatise, he not only classified different types of cubic equations, but also presented systematic solution to them. The work, which laid down the principles of modern-day algebra, established him as a prominent mathematician.
Khayyam may have written another book before writing the treatise. However, his earlier works have been lost. From the references found in his algebra book, scholars have come to a conclusion that he had discussed Pascal triangle and binomial coefficients in his lost work. 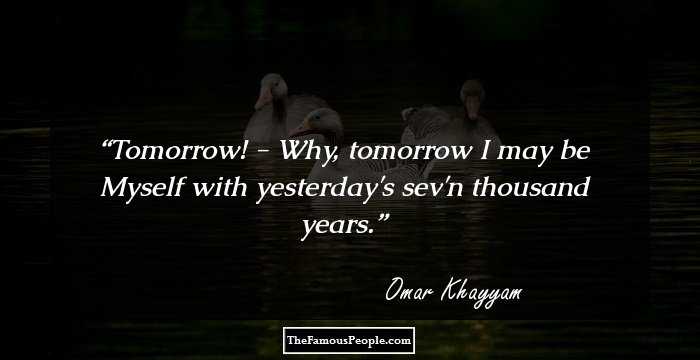 In Isfahan
Sometime after publishing the treaties on algebra, Khayyam moved to Bukhara, possibly with an appointment to the royal court. While he was there, Jalal al-Din Malik-Shah Saljuqi became the Seljuk emperor, with Khayyam’s old friend Nizam-ul-Mulk appointed as his Vizier.
Possibly in 1073, Omar Khayyam received an invitation from Malik Shah I, asking him to come to his capital at Isfahan to build an observatory for him. Accordingly, he moved to Isfahan, possibly in 1074, to lead a team of scientists. Khayyam received an extraordinarily high salary for the project.
In 1075, Omar Khayyam, along with two other scientists, produced a set of astronomical tables. Titled ‘Al-zij al-Malikshahi,’ the tables were named after their royal patron. Unfortunately, most of the work, excepting a table of 100 fixed stars, is now lost.
At the emperor’s order, he reformed the solar calendar, which was in use in Persia. After a lot of calculation, he came to the conclusion that a year held 365.24219858156 days, and that there were eight leap years in every 33 years.
Continue Reading Below
Named ‘Maliki,’ after the emperor, the calendar was introduced on March 15, 1079, and was in use for thousand years. It was later renamed as ‘Jalali Calendar.’ The Gregorian calendar that came into use after 500 years was based on Khayyam’s calculations.
Khayyam remained at Isfahan for 18 years, working in different fields. One of his most important mathematical works of this period was ‘Sharh ma ashkala min musadarat kitab Uqlidis’ (Explanations of the Difficulties in the Postulates of Euclid). It was later published in English as ‘On the Difficulties of Euclid's Definitions.’
In this work, written in 1077, he tried to prove the parallel postulate with only the first four postulates by examining a rectangular quadrilateral. While doing so, he was able to recognize results of some form of non-Euclidean geometry and unknowingly contributed to its development.
Later Years
Until 1092, Khayyam was one of the influential courtiers in Sultan Malik Shah’s court. But the situation changed in 1092, when his patron died, possibly due to poisoning. His friend and benefactor Nizam al-Mulk was also assassinated in the same year. After their death, important positions seemed to have eluded Khayyam.
To regain his position, he wrote a book in which he praised former rulers as honorable men who had supported public works, science, and scholarship. But it did not help. By then, Malik Shah’s widow had turned against him.
In the mid-1090s, Khayyam went on Hajj pilgrimage to Mecca. On completing the Hajj, he returned to Nishapur, where he took up teaching as his profession, giving instructions in philosophy and mathematics. He might have also acted as the court astrologer at Nishapur.
One of his students during this period was Khwájah Nizámi of Samarkand. He later wrote that he often held conversation with his teacher Omar Khayyam in a garden. He claimed that Khayyam had once told him that he would have his tomb placed in a particular spot so that the north wind could scatter roses over it.
Omar Khayyam might have traveled a lot during this period, visiting Balkh in 1112-1113. Later in 1118, he went to Marv, the then capital of Seljuk Empire, after being summoned by Malik Shah’s third son Sanjar, Governor of Khorasan. Here, he was asked to forecast the weather for hunting expeditions.
It is not known what happened to him after 1118. From Marv, he possibly returned to Nishapur to lead a private life until his death in 1131.
Continue Reading Below 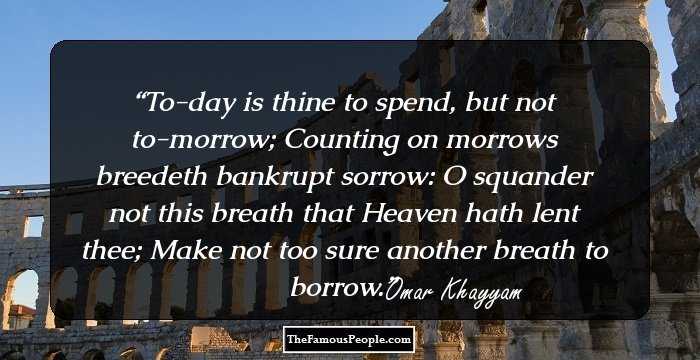 Major Works
Though Omar Khayyam produced some groundbreaking works in mathematics, he is more popular for his four-line verses, known as ‘rubai.’ Over the years, he wrote thousands of such verses, but refrained from publishing them. It was only after his death that the verses came to light.
Initially, they drew little attention even in Persia. The world took notice of them in 1859 when Edward Fitzgerald translated and published 600 of the verses as ‘Rubaiyat of Omar Khayyam.’ Later, they were translated in all major languages; some from original Persian and others from Fitzgerald’s work.
Fitzgerald did not translate the verses literally as he imbibed Victorian Romanticism in them. Originally written as complete poems, the verses were also rearranged by Fitzgerald to form an intellectual unity and consistency. Although more faithful translations of the verses have been published since then, Fitzgerald’s work remains most popular.
Personal Life & Legacy
Although very little is known about Omar Khayyam’s personal life, it is generally believed that he was married and fathered two children; a son and a daughter.
He was a Sufi Muslim who revered Prophet Muhammad. In his philosophical work ‘al-Risālah fil-wujūd’ (Treatise on Being), he wrote that all things came from God. His poems also reveal that he was a thoughtful man, troubled by the uncertainty of life and man’s relationship with his creator.
Omar Khayyam died on 4 December 1131, in Nishapur and was buried at the same spot that he had shown to his student Khwájah Nizámi of Samarkand. The mausoleum of Omar Khayyam was reconstructed on the site by Houshang Seyhoun in 1963.
In 2009, a ‘Persian Scholars Pavilion’ was donated by Iran to the ‘United Nations Office’ in Vienna. A statue of Khayyam is featured as part of the pavilion.
In 1970, a lunar crater, located just beyond the northwestern limb of the Moon, on the far side from the Earth, was named ‘Omar Khayyam’ in his honor.
A minor planet, discovered in 1980 by Soviet astronomer Lyudmila Zhuravlyova, has been named ‘3095 Omar Khayyam’ in his honor.
Recommended Lists:
Astronomers #63
Scientists #114
Writers #471
Intellectuals & Academics #187

Quotes By Omar Khayyam | Quote Of The Day | Top 100 Quotes

See the events in life of Omar Khayyam in Chronological Order 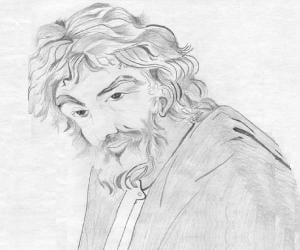