Omar Gooding is an American actor, rapper, comedian, and voice artist, best known for his performances in films such as ‘The Ernest Green Story’ and ‘The Gospel.’ He was born and raised in Los Angeles, California. He was part of a family that was actively associated with the American entertainment industry. His father, Cuba Gooding Sr., was part of the band ‘The Main Ingredient.’ Omar’s older brother, Cuba Gooding Jr., is an ‘Academy Award’-winning actor. Ever since Omar was a kid, he wanted to follow in his father’s footsteps. He made his acting debut in 1990, with the supporting role of ‘Stuart’ in the film ‘Ghost Dad.’ He then appeared in the films ‘The Ernest Green Story,’ ‘Baby Boy,’ and ‘The Gospel.’ He also appeared in TV series such as ‘Miami Medical’ and ‘Family Time.’ He is perhaps best known for his leading role in the series ‘Family Time,’ which debuted on TV in 2012. Additionally, Omar has also recorded a few singles such as ‘No Warning,’ using the stage name “Big O.”
Continue Reading Below 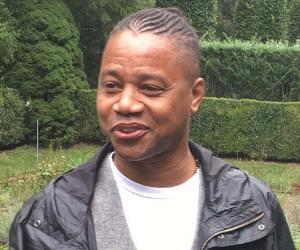 American People
American Men
California Actors
Tall Celebrities
Tall Male Celebrities
Childhood & Early Life
Omar Gooding was born Omar M Gooding, on October 19, 1976, in Los Angeles, California, to Cuba Gooding Sr. and Shirley Sullivan. He is the second son in the family and grew up with his older brother, Cuba Gooding Jr.
His father was actively involved in the American entertainment world and was a key member of the popular American soul and R&B group named ‘The Main Ingredient.’ Omar’s older brother also became a famous actor and ended up winning an ‘Academy Award’ for his role in the 1996 film ‘Jerry Maguire.’ His mother was also an entertainer.
With a family involved in the show business, Omar was left with little choices in terms of a career. He naturally became attracted to the world of acting and music. His interest intensified when his older brother expressed his desire to become an actor and the family shifted to Toluca Lake, a few miles away from Hollywood.
Omar’s older brother took acting classes and also had an agent working for him. Omar was discovered by the ‘Coralie Jr. Theatrical Agency’ when he was 10 years old. He requested his mother to work in theater. His mother finally agreed, and hence, Omar began his acting career in theatrical plays as a kid.
Meanwhile, Omar completed his graduation from the ‘North Hollywood High School’ in Hollywood, Los Angeles.
Continue Reading Below
You May Like

Who Is The Most Popular BTS Member?
Career
At the age of 14, Omar made his acting debut with the film ‘Ghost Dad,’ which was released in 1990. The fantasy–comedy film starred Bill Cosby in the lead role (‘Elliot Hopper’) and had Omar playing ‘Stuart.’ The film was a major critical and commercial disaster and could not even recover its costs.
In 1992, Omar had the first major acting breakthrough of his career when he was signed as one of the main characters in the sitcom ‘Hangin’ with Mr. Cooper.’ Omar played the role of a high school graduate and basketball player, ‘Earvin Rodman,’ in the sitcom. Omar portrayed the role for five seasons. It was one of the most popular and successful American sitcoms of his time.
In 1993, Omar appeared as ‘Marcus’ in the made-for-TV film titled ‘The Ernest Green Story.’ The film revolved around the themes of racism and was praised by critics.
In 1997, Omar was signed on to play one of the leading roles in the sitcom titled ‘Smart Guy.’ He played ‘Morris L. "Mo" Tibbs’ on the show. His character was the best friend of the show’s lead character, ‘T.J.’ The series ran for three successful seasons, spanning 51 episodes, before it was canceled.
In 2001, Omar received yet another big break when he was signed as the second lead in the film ‘Baby Boy.’ The film focused on the “hood” life in Los Angeles and starred Tyrese Gibson in the main role. Omar played the role of ‘Sweetpea,’ the best friend of the lead character, ‘Jody.’ The film was a critical success but failed to make big numbers at the box office.
Omar played the first lead role of his acting career in the 2003 series ‘Playmakers,’ which featured him as ‘Demetrius Harris,’ a rookie in a rugby team. The series was critically acclaimed but was not renewed for a second season.
In 2005, Omar was seen in the supporting role of ‘Wesley’ in the Idris Elba-starrer drama film ‘The Gospel.’ The film was a box-office disaster but received mixed response from critics.
After taking a long break from screen acting, Omar made a comeback in 2010, with the role of ‘Tuck Brody’ in the series ‘Miami Medical.’ The medical drama TV series, in which Omar had a supporting role, was canceled after one season.
Omar then made a guest appearance in the series ‘Grey’s Anatomy’ (as ‘Danny’). In 2012, he began playing the lead role of ‘Anthony "Tony" Stallworth’ in the sitcom ‘Family Time.’ The series is still running strong and is in its six season now.
In 2013, Omar appeared in supporting roles in films such as ‘The Devil’s Dozen’ and ‘Percentage.’ He also appeared in the sitcom titled ‘Mr. Box Office.’
More recently, Omar was seen in supporting roles in films such as ‘Boy Bye’ and ‘Only for One Night.’ He has lent his voice to ‘Batman Beyond’ (as ‘Jared Tate/Trey,’ 1999–2000) and Static Shock (as ‘Wade,’ 2000)
Family & Personal Life
Omar Gooding had a long-term relationship with actor Angell Conwell in the early 2000s. The couple separated in 2006.
Presently, Omar is engaged to Mia Vogel and has a son with her, Omar Dari Gooding Jr., who was born on January 27, 2017.
Omar has also faced troubles with the law. He was arrested for gun possession in 1995 and was sent on probation for 18 months.

See the events in life of Omar Gooding in Chronological Order