Morihei Ueshiba is one of the legendary figures of Japan who founded the Japanese martial art of aikido. A famous martial artist instructor, he spent much of life gaining and imparting knowledge of the fine art. Interestingly, Ueshiba was once a frail child who was weak and feeble. However, he soon changed himself by getting into the military. Relieved from his duties, he moved to Hokkaido where he joined hands with Takeda Sokaku, the founder of Daito-ryu aiki-jujutsu. Later on, he joined Omoto-kyo movement in Ayabe, serving as a martial arts instructor and opening his first dojo. Though he was known for his skills and art, it was after the spiritual enlightenment in the 1925 that his skills were supremely enhanced. His later spiritual experiences in 1940 and 1941 shaped much of what his future teachings comprised of. Interestingly, the more spiritual Ueshiba turned in his outlook, the more changes he brought about in his art which became softer and more circular. He altered the formal curriculum to make it simpler concentrating more on ‘breath throws’, which used opponent’s movement to defeat them.
Continue Reading Below Japanese Celebrities
Japanese Men
Male Sportspersons
Japanese Sportspersons
Japanese Martial Artists
Childhood & Early Life
Morihei Ueshiba was the fourth child and the only son born to Yoroku Ueshiba and Yuki in Tanabe, Wakayama Prefecture, Japan. His family was financially affluent as his father was a trader of lumber and fishing apart from being a landowner.
As a child, young Ueshiba was weak and sickly. However, irrespective of his frail health, his father inspired him to become strong and robust by taking to sumo wrestling and swimming as a hobby.
It was an unfortunate incident during which his father was attacked by people of the opposition party that he understood the impetus of being tough and sturdy. The incident showed him how important it was to be strong and combatant.
He attended various institutions starting from the Jizoderu Temple where he was taught Confucian education. He them attended Tanage Higher Elementary School and Tanabe Prefectural Middle School. However, he left the same mid-way to enroll at Yoshida Institute, a private abacus academy.
At Yoshida Institute, he studied accountancy. Upon graduating from the same, he took up a job at the local tax office. However, lack of interest in the work profile led him to vacate the office soon.
In 1901, he moved to Tokyo. Therein he initiated a stationery business but the unprofitable nature of the business forced him to shut it down and move back to Tanabe. 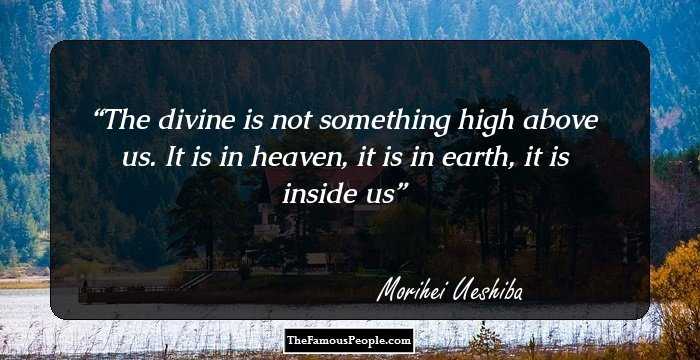 The Most Popular US Veterans
Career
In 1903, he was drafted for military duties but he failed in the initial exam due to his short height. Though he was depressed, he did not give up and instead looked for ways to enhance his height.
Interestingly, he attached heavy weights to his legs and suspended himself from the tree branches to stretch his spine and increase his height. The hard work paid off and he passed in the re-test successfully enhancing his height by half an inch to cross the mark.
He was first assigned to the Osaka Fourth Division at the 37th Regiment. Within a year, he reached the rank of a corporal. Post his active service at the Russo-Japanese War, he was promoted yet again to the post of a sergeant.
In 1907, relieved from his military duties, he returned to Tanabe and befriended Minakata Kumagusu. It was under the latter’s influence that he became involved in politics, opposing Meiji government's Shrine Consolidation Policy
Meanwhile, he sporadically trained himself at martial arts at the Goto-ha Yagyu-ryu under Masakatsu Nakai. It was only after a couple of years that he attained a diploma in the art. Furthermore, he also trained himself at Tenjin Shin'y-ryu jujutsu and judo.
In 1912, he relocated to Hokkaido along with his family. Therein, he took over as the leader of the Kishu Settlement Group. The group which comprised of 85 members intended to live as farmers.
He was later appointed to the village council. In his new position, he initiated restoration and reconstruction effort to lessen the impact of the fire that razed the village.
It was while at Hokkaido that he met Takeda Sokaku. Impressed by the latter, he soon became a disciple and requested to gain formal training in Takeda's Daito-ryu aiki-jujutsu. He soon invited Takeda as his permanent home guest.
From 1915 until 1937, he spent much of his time receiving training from Takeda. He gradually learned the art and climbed up the ladder step by step to attain the important scrolls such as the Hiden Mokuroko, the Hiden Ogi and the Goshin'yo te.
Continue Reading Below
Finally, in 1922, he received his teacher training certificate or kyoju dairi certificate. The same year, he received the Kashima Shinden Jikishinkage-ryu sword transmission scroll.
Upon receiving the then highest level of achievement license, he served as the representative of Daito-ryu. He moved on to become an assistant to Takeda and started training others who were under the Daito-ryu name.
Upon receiving the news of his father’s ill health, he started his journey toward Tanabe but detoured mid-way to visit Onisaburo Deguchi, the spiritual leader of the Omoto-kyo religion in Ayabe. Deguchi inspired and influenced him so much so that he elongated his stay.
He resumed his journey but upon reaching Tanabe he found that his father had passed away. He then moved back to Ayabe to become a full-time student of Omoto-kyo.
In 1920, he was appointed to serve as the martial arts instructor and a dojo by Deguchi. The following year, the compound of Omoto-kyo was raided by the Japanese authorities. In an effort to revamp the place, he started to indulge in farming work.
In 1924, he began a regime of spiritual training at Ayabe. For the same, he often retreated himself to the mountains or by performing misogi in the Nachi Falls. He gained a spiritual enlightenment in 1925 post which he gained complete proficiency as a martial arts instructor.
The enlightenment gave him a supreme power with which he defeated all his challengers who subsequently became his students. During the latter half of 1925, he was asked to demonstrate his art in Tokyo by Admiral Isamu Takes.
Impressed by his prowess at the art, the admiral asked him to extend his stay in the Capital and serve as the instructor for the Imperial Guard. Though he accepted the offer, the stay was short-lived as there emerged friction between him and the government officials which led to his relocation to Ayabe.
In 1926, he was yet again invited to Tokyo by Takeshita. Though he reluctantly agreed, his stay became controversial again due to his ill health and the eventual visit by Deguchi. The lack of proper treatment and the controversy of the Deguchi visit led him to move back to Ayabe.
Continue Reading Below
However, in a span of six months, he permanently relocated to Tokyo and set up home in the Shirokane district. However, due to a large influx of students, he moved to a big premises in Shinjuku.
From 1940 to 1942, he served as the principal martial arts instructor at Kenkoku University and made several visits to the Manchukuo.
Meanwhile, from 1935, he started purchasing land at Iwama in the Ibaraki Prefecture. By 1942, his holding of land increased to 17 acres of farmland. With a large land holding, he finally left Tokyo for good and settled at the Iwama in a small farmer’s cottage. It was there that he founded the Aiki Shuren Dojo, also known as the Iwama dojo.
Post World War II, teaching of martial arts was strictly prohibited. Despite this, he continued to practice in secret at the Iwama dojo; the Hombu dojo in Tokyo. It was only in 1948 after the lifting of the ban that martial arts instruction was made legal. However by then, he passed on most of the work and charges to his son
He spent much of the latter days of his life in prayer, meditation, calligraphy and farming. He extensively promoted aikido. In 1960, he even made an appearance in the NTV’s ‘The Master of Akido’ 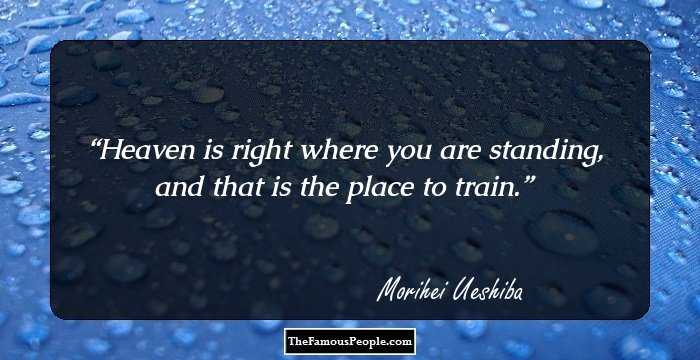 Quotes: You
Personal Life & Legacy
He tied the nuptial knot with his childhood friend, Hatsu Itokawa after returning from his first visit to Tokyo in 1901.
The couple was blessed with three children, of which two failed to survive past adolescence. His third child, a son Kisshomaru Ueshiba was born in the summer of 1921.
In 1969, his health started depleting frantically. In the month of March he was taken to a hospital where he was diagnosed to be suffering from cancer of the liver. He breathed his last on April 26, 1969.
Within two months of his death, his wife too passed away.
Till date, Omoto-kyo priests supervise a ceremony in his honor at the Aiki Shrine in Iwama on every April 29.
Awards & Achievements
In 1960, he was conferred with the prestigious Medal of Honor (japan).
In 1964, he became the proud recipient of the Order of the Rising Sun, Gold Rays with Rosette.
In 1968, he was bestowed with the prominent Order of the Sacred Treasure (Japan). 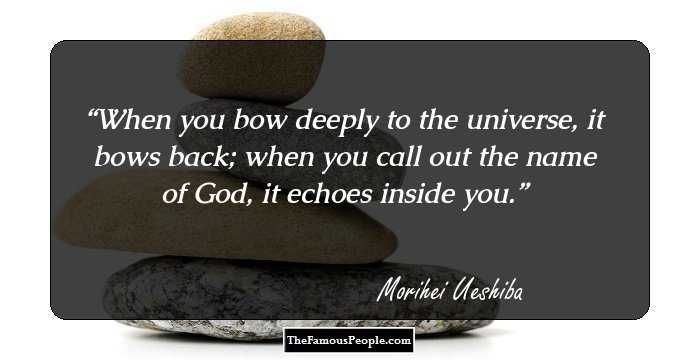 Quotes: You, God
Trivia
He was a great martial artist and founder of the Japanese martial arts of aikido.
You May Like

Quotes By Morihei Ueshiba | Quote Of The Day | Top 100 Quotes

See the events in life of Morihei Ueshiba in Chronological Order