Morgan Earp is one of the legendary Earp brothers whose story has been told in the book ‘The Earp Brothers of Tombstone,’ believed to have been written by his sister-in-law. His life has been portrayed in the TV series ‘The Life and Legend of Wyatt Earp’ and in the movie ‘Gunfight at the O.K. Corral.’ While his elder brothers were fighting the American Civil War, he was left to look after the farm with his teenage sibling. However, he preferred wielding a gun to farming and started as a shotgun messenger. He later worked as a deputy marshal under his brother in Tombstone. While in Tombstone, Morgan and his brothers got into a conflict with the outlaw group ‘Cowboys,’ who were suspected to be involved in stealing cattle and horses. The Earp brothers confronted the ‘Cowboys’ in the famous gunfight at the ‘OK Corral,’ in which three of the Cowboys were killed and Morgan was shot in the shoulder. The brothers were put under arrest for murder, but were later released as the jury felt that their actions were justified. Six months later, Morgan was assassinated by a gunman, who shot him through a window, while he was playing billiards, late at night, at a billiards parlor. His brother Wyatt decided to avenge his brother’s death by taking law into his own hands. While the court acquitted the accused, Wyatt and his men killed three of the suspects. The rest of the of the ‘Cowboys’ behind Morgan’s death were later caught up by the law on miscellaneous charges. 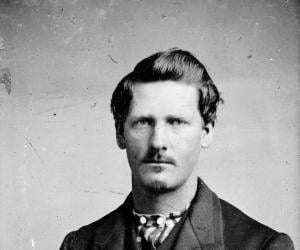 Elsa Einstein
Continue Reading Below
DID WE MISS SOMEONE?
CLICK HERE AND TELL US
WE'LL MAKE SURE
THEY'RE HERE A.S.A.P
Quick Facts

Elsa Einstein
Childhood & Early Life
Morgan Earp was born on April 24, 1851, in Pella, Lowa, to Nicholas Porter Earp and his second wife, Virginia Ann Cooksey. His father was a farmer and cooper, who made utensils and barrels out of wood and other material. Morgan had nine siblings, of which three were sisters.
Morgan’s elder brothers, James, Newton, and Virgil, were on the front line during the American Civil War, while Morgan and his younger brother Wyatt were left to look after the farm. However, Morgan disliked farming and soon followed his brother James to Montana, while he was still a teenager. Later, Wyatt and Morgan were deployed on the western frontier, during the war.
Continue Reading Below
You May Like

Who Is The Most Popular BTS Member?
Career
Morgan started his career as a shotgun messenger for ‘Wells Fargo & Co.’ He worked as a deputy under his brother Virgil and was later made a deputy US marshal under his brother Wyatt in Tombstone. While in Tombstone, Morgan and his brothers came into conflict with the Clantons and McLaurys, who were suspected to be involved in stealing cattle and horses.
According to legend, the first man to be killed by Morgan was Billy Brooks, who had challenged Morgan to a duel after he learnt that Morgan was being made Marshal in place of him. Morgan was injured in the shoulder, while Brooks was mortally shot in the stomach during the dual.
In October 1881, the Earp brothers were threatened by Ike Clanton and his ‘Cowboys,’ who were on the wrong side of the law. Marshal Virgil Earp had learnt that Clanton and his ‘Cowboys' were armed, in contravention to the Tombstone city law, and were lodged near the ‘OK Corral.’ Marshal Virgil, along with his deputies, Morgan and Wyatt, set out to disarm them in a confrontation on the street.
While Ike Clanton fled the scene, three of his ‘Cowboys’ were killed. Morgan was shot in the shoulder but managed to continue to use his weapon. His brother Virgil was also shot in the calf during the gunfight. Morgan and his brothers were put under arrest for murder, but were released 30 days later as the jury felt that their actions were justified.
In December 1881, there was another attempt to assassinate Virgil Earp that left him seriously injured and crippled for life. Morgan saw the danger to the family and sent his wife, Louisa, to stay with his parents in Colton, California. However, he decided to stay back in Tombstone to support his brothers.
On March 18, 1882, Morgan was assassinated by a gunman who shot him through a window, while he was playing billiards at a billiards parlor, late at night. The bullet struck him through the right shoulder and shattered his spine and other vital organs. He was examined by the best doctors available but could not be saved.
He died within half an hour of being shot and his body was taken to his parent’s place in Colton, California, where his wife had been waiting. He was buried in the cemetery of the town, near Mount Slover. Later, when the cemetery was relocated, his body was exhumed and reburied in the Hermosa Cemetery of Colton.
Personal Life & Legacy
Morgan married Louisa Alice Houston in the 1870s, while he was a deputy in Dodge City. She was a petite woman who suffered from rheumatoid arthritis and whom Morgan did not want to expose to a rough life. Hence, he bought a house in Miles City, Montana, where they lived for a while. Later, he took her to stay with his parents in Temescal, California, while he moved to join his brothers in the mining town of Tombstone, in July 1880. However, Louisa joined him six months later in Tombstone, only to be sent back when the situation worsened.
He gained the reputation of being a hot-tempered man from the accounts of the book written by his sister-in-law, Allie. However, in real life, he was quite an even-headed and sober man.
Morgan married only once and remained loyal to his wife. After his death, she remarried, but her second marriage did not seem to be as happy as her affectionate relationship with Morgan.
Trivia
Actor Ray Boyle portrayed Morgan Earp in the TV series, ‘The Life and Legend of Wyatt Earp,’ which was aired on ‘ABC’ from 1955 to 1961. He was portrayed by DeForest Kelley in the 1957 western movie, ‘Gunfight at the O.K. Corral’ and by Sam Melville in the 1967 film ‘Hour of the Gun.’
His story was also told in the movies ‘Tombstone’ (1993) and ‘Wyatt Earp’ (1994), in which he was portrayed by Bill Paxton and Lindan Ashby, respectively.
Morgan did not show any signs of grief or pain while he was dying. Jokingly, he told his brothers that it looked like it would be his last game of billiards. He also whispered to Wyatt ‘I can’t see a damn thing,’ as the brothers had promised each other that they would tell each other what it was like on the other side, when their time came to die.
Though there was an inquiry into the death of Morgan, his brother Wyatt decided to avenge his brother’s death by taking law into his own hands. He put together a band of men and set out to kill the cowboys, who he believed to be behind his brother’s death. While the court acquitted the accused, Wyatt and his men killed three of the suspects, while the law caught up with most of the others on miscellaneous charges.
The story of the Earp brothers, titled ‘The Earp Brothers of Tombstone,’ is supposedly written by Virgil Earp’s wife, Allie.
You May Like

See the events in life of Morgan Earp in Chronological Order