Molly Helen Shannon is an American Comic actress who gained popularity for her work as one of the cast members on Saturday Night Live. She was on the show from 1995-2001 and established herself as the longest-serving female cast member on the show. She was famous on the show for her quirky creativity and her knack for developing various hilarious characters such as: ‘Mary Katherine Gallagher’--her best known character, ‘Sally O'Malley’--a proud 50-year old dancer with a bouffant hairdo, ‘Margaret Healy’--a woman who enjoys doing lots of voices and accents, etc. Shannon’s career took off after Saturday Night Live and she started appearing in recurring roles in television series like, ‘Will & Grace’, ‘Glee’, ‘Seinfeld’, etc. and also did movies like, ‘Never Been Kissed’, ‘Year of the Dog’, ‘Evan Almighty’, etc. More recently, she starred in NBC's ‘Kath & Kim’ from 2008 to 2009, on the TBS animated series ‘Neighbors from Hell’ and Fox’s American teen-musical comedy drama television series called ‘Glee’ in 2010. Shannon is not just a comedian with perfect on-screen timing and presence, she is also a writer and has recently authored a children’s book titled ‘Tilly the Trickster’.
Continue Reading Below American People
Actresses
Comedians
American Women
Ohio Actresses
Childhood & Early Life
Shannon was born Ohio to Mary Margaret Keating and James Francis Shannon. Her father was a sales manager and mother was a teacher. Shannon lost her mother and sister in a car accident when she was only 4.
She attended St. Dominic School in Shaker Heights for grade school, and Hawken School in Gates Mills, Ohio. Later, she went to New York University's Tisch School of the Arts for her bachelor’s degree. 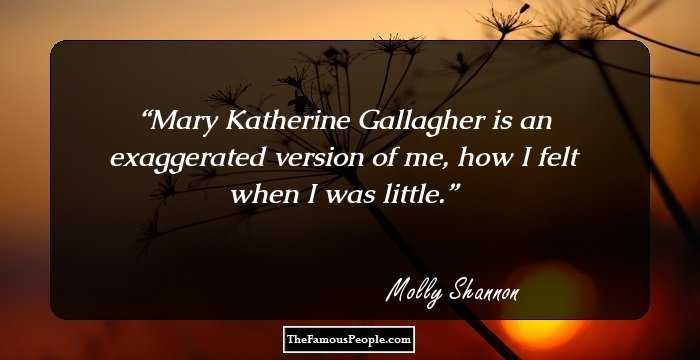 The Sexiest Men Of 2020, Ranked
Career
With aspiration to become an actress, she went to New York but struggled to get any proper opportunities and landed a brief supporting role in the horror film remake of ‘The Phantom of the Opera’ in 1989.
Before her career really took off, Shannon did cameos on television with ‘Twin Peaks (1991)’, ‘In Living Color (1993)’ and comedy sketches and spoofs with well established comedians like Chris Rock and Jim Carrey.
Shannon’s major entertainment opportunity came with ‘Saturday Night Live’ when she was hired as a featured player to replace Janeane Garofalo in 1995. She was cast as a permanent later along with artists like David Spade, Mark McKinney, etc.
At ‘Saturday Night Live’ she became popular for the characters she brought into the show like that of ‘Mary Katherine Gallagher’--a weird, uptight Catholic school girl and then another senior showgirl ‘Sally O’Malley’.
In 1997, Shannon appeared on ‘Seinfeld’ titled ‘The Summer of George’ and also did a stint in singer Sheryl Crow’s video ‘A Change (Will Do You Good)’, along with a recurring role in ‘Will & Grace’.
Towards the late ‘90s, Shannon, now the seasoned comedian, starred as ‘Emily Sanderson’ in the movie ‘A Night at the Roxbury (1998)’ along with Will Ferrell and in a movie based on her ‘Mary Katherine Gallagher’ character--‘Superstar (1999)’.
In the early 2000s, Shannon left ‘Saturday Night Live’ after becoming the longest-serving female cast member on the show and appeared in the romantic comedy titled ‘My Boss’s Daughter (2003)’ along with Ashton Kutcher and Tara Reid.
She was cast in Fox network’s ‘Cracking Up’ in 2004 but unfortunately it was short-lived and only aired for a few months. During the same time, she also made brief appearances in ‘Scrubs’ and the movie ‘Good Boy!’.
In 2006, Shannon managed to get a role in Sofia Coppola’s directed movie titled ‘Marie Antoinette’. She played the role of ‘Aunt Victoire’ and worked along with stars like Kirsten Dunst, Jason Schwartzman, etc.
Continue Reading Below
The year 2007 proved to be an experimental one for Shannon as she moved from comedy to drama with ‘Year of the Dog’. She also briefly starred on television with ABC’s ‘Pushing Daisies’ and in the movie ‘Evan Almighty’.
She managed to gain success with ‘Kath & Kim’ in 2008, and American remake of a popular Australian series, starring alongside Selma Blair. But the show was soon taken off air as it failed to gain popularity with the viewers.
She was cast in the recurring role of ‘Brenda Castle’—an astronomy and badminton teacher, on the popular American teen-musical comedy drama television series called ‘Glee’ in 2010. She also returned to ‘Saturday Night Live’ for a special episode.
Her more recent entertainment projects include: the role of ‘Marge McDougall’ in the Broadway revival of ‘Promises (2010)’, a children’s book ‘Tilly the Trickster (2011)’, the spokesperson for ‘Expedia.com (2012)’ and a recurring role in ‘Enlightened (2013)’. 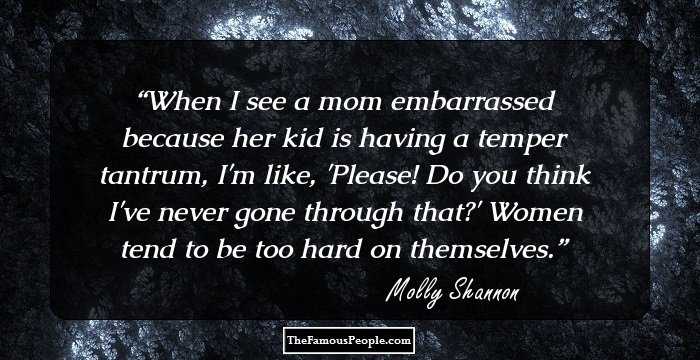 Quotes: You, Think, Never, Women
Major Works
The most prominent work of Shannon’s career is considered to be her stint with ‘Saturday Night Live’, a show which established her comic talents in the entertainment world. She is the longest-serving female cast member on the show.
Personal Life & Legacy
Shannon got married to Fritz Chestnut, an artist, in 2004 and the couple has two children together: Stella and Nolan. 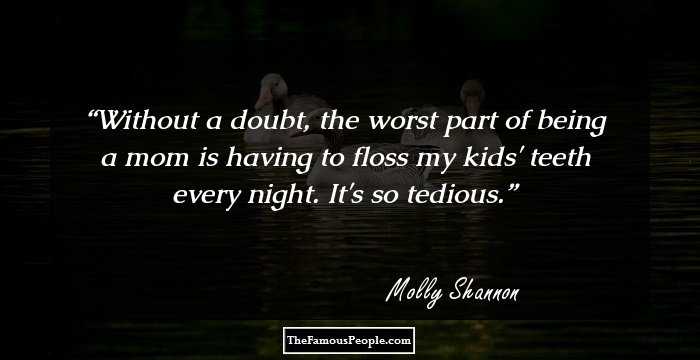 Trivia
this American comedienne does impeccable celebrity impressions of: Angelina Jolie, Kim Cattrall, Courtney Love, Gisele Bundchen, Cate Blanchett, Madonna, etc.
She was in the same car which crashed, killing her 34 year old mother, her 3 year old sister, and a 25 year old cousin.
She wore an off-white ‘garden dress’ designed by Saturday Night Live wardrobe department head Dale Richards in her May 2004 wedding to Fritz Chesnut.
She starred with Drew Barrymore in ‘Never Been Kissed’ in 1999 and with Jim Carey in ‘How the Grinch Stole Christmas’ in 2000.
In her own words—“My dad was a real fun guy and, despite his personal problems, he was a great father. It wasn't easy, but he did a good job of raising my sister Mary and I all by himself”. Her father was left disabled in the accident that killed her mother.

Quotes By Molly Shannon | Quote Of The Day | Top 100 Quotes

See the events in life of Molly Shannon in Chronological Order