Moses Harry Horwitz, better known by his stage name Moe Howard, was an American actor and comedian. He is best remembered as the leader of American vaudeville and comedy team, ‘The Three Stooges.’ Moe started out in the 1920s as part of a vaudeville comedy act titled ‘Ted Healy and His Stooges.’ The act originally had Moe and Ted Healy who were later joined by Shemp Howard and Larry Fine. Eventually, ‘The Three Stooges’ became distinguished for its slapstick comedy and farce with Moe and Larry as its two mainstays. Though only three performers took the stage to complete one act, a total of six performers (stooges) were featured throughout the act’s running period of almost five decades. ‘The Three Stooges’ collaborated with ‘Columbia Pictures’ and made 190 short films and Moe was widely recognized as one of the stooges. During his illustrious career spanning six decades, Moe was seen in more than 250 films. He was posthumously honored with a ‘Star’ on the ‘Hollywood Walk of Fame.’ 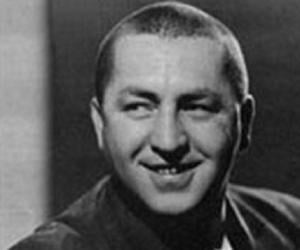 American Celebrities
Comedians
American Men
New Yorkers Actors
Gemini Actors
Childhood & Early Life
Moses Harry Horwitz was born on June 19, 1897, in Bensonhurst, Brooklyn, New York, USA. He was fourth among five sons born to Jennie Gorovitz and Solomon Horwitz. Moses, who became known as Moe when he was young, was of Lithuanian Jewish origin. Among his four brothers, Shemp and Jerome ‘Jerry’ Howard (Curly), too, were involved in show business and became members of ‘The Three Stooges.’
Moe preferred watching plays in theatres than attending school. As juveniles were not allowed in theatres without adults, he would stand outside the theatre until he could ask someone to buy the ticket for him. When watching the play, he would select an actor he liked the most and follow his performance throughout the play.
His mother did not allow him to cut his hair during his childhood. When he was being teased at school for having grown his hair to shoulder length, he gave himself a haircut in his backyard shed. His ‘bowl cut’ hairstyle eventually became his distinctive style.
He graduated from ‘Public School 163’ in Brooklyn and then attended ‘Erasmus Hall High School,’ only to drop out after two months which marked an end to his formal education. As per his parents’ wish, Moe enrolled into a course at an electric shop but quit after a few months to pursue acting.
Continue Reading Below
You May Like

Who Is The Greatest Female Warrior In History?
Career
Moe began working at ‘Vitagraph Studios’ in Midwood where he ran unpaid errands. He eventually landed bit parts in movies produced by the studio. However, most of his work was destroyed by a fire accident in 1910. He started singing in a bar with his older brother Shemp and later became part of a performing minstrel show troupe, in 1914. He then joined Ted Healy for a vaudeville routine in 1921. Moe and Ted Healy were eventually joined by Shemp.
Following his marriage, Moe left his vaudeville group in June 1925 and joined his mother to take care of their real estate business. Meanwhile, a musical revue titled ‘A Night in Spain,’ which featured Ted Healy and Shemp Howard, gained national attention with successful Broadway run and a national tour.
In March 1928, Healy brought vaudeville violinist Larry Fine into the act and convinced Moe to re-join the group in December 1928. Subsequently, the group toured as ‘Ted Healy and His Racketeers’ before changing its name to ‘Ted Healy and His Stooges.’
The American Pre-Code movie ‘Soup to Nuts’ (1930) marked the film debut of ‘Ted Healy and His Stooges.’ On August 19, 1932, Shemp left the group to pursue a solo career and was replaced by Moe’s youngest brother Jerry, who adopted the stage name ‘Curly.’
‘Metro-Goldwyn-Mayer’ hired ‘Healy and His Stooges’ in early 1933, and featured the group in several ‘MGM’ films. In 1934, Healy started pursuing his solo career which prompted Moe to take charge of the group as its new leader. The group, which was renamed as ‘The Three Stooges,’ was signed by ‘Columbia Pictures’ until December 1957, during which they made 190 comedy shorts. The short films included ‘Men in Black’ (1934), a parody of the popular hospital drama, ‘Men in White.’ The parody fetched the trio their first and the only ‘Oscar’ nomination under the category ‘Best Short Subject – Comedy.’
Curly suffered a series of strokes following which Shemp agreed to replace him until his recovery. Curly managed to make a cameo appearance in ‘Hold That Lion,’ the 100th short film released by ‘Columbia Pictures,’ which released on July 17, 1947. ‘Hold That Lion’ became the only ‘Three Stooges’ film to feature all three Howard brothers - Moe, Shemp, and Curly. On January 18, 1952, Curly died after suffering a second series of strokes.
During the 1950s, Moe co-produced Western and musical films. On November 22, 1955, Shemp succumbed to a heart attack and was eventually succeeded by Joe Besser in 1956. However, Besser left the group because of his wife’s illness, leaving the position of the ‘third stooge’ vacant. Joe DeRita, who was starring in a series of shorts at Columbia, filled in as the ‘third stooge’ in 1958. With time, DeRita succeeded in reviving the persona of Curly Joe.
Meanwhile, the members of ‘The Three Stooges’ became popular as television superstars when ‘Screen Gems,’ the television subsidiary of ‘Columbia Pictures,’ syndicated old comedies of the group on television. The new trio went on to star in six feature films, including box-office hits, such as ‘Have Rocket, Will Travel’ (1959) and ‘The Three Stooges Meet Hercules’ (1962).
The trio appeared in many TV shows like ‘Truth or Consequences,’ ‘The Joey Bishop Show,’ and ‘The Steve Allen Show.’ They also appeared in films like ‘It's a Mad, Mad, Mad, Mad World’ (1963) and ‘4 for Texas’ (1963). From 1965 to 1966, they featured in the animated children’s TV show ‘The New Three Stooges.’
The last film starring the members of ‘The Three Stooges’ was an American comedy titled ‘Kook's Tour,’ which was initially produced as the pilot for a television show. However, its production was halted after Larry suffered a severe stroke on January 9, 1970. The film could only be released in 1975, in ‘Super 8 Sound’ home movie format when the usable footage was edited into a 52-minute film by director Norman Maurer (Moe’s son-in-law). Larry died on January 24, 1975, a few months before Moe’s demise.
Family, Personal Life & Legacy
Moe married Helen Schonberger on June 7, 1925. The couple had two children, Joan and Paul, born in 1927 and 1935 respectively.
Moe, a heavy smoker, was diagnosed with lung cancer and succumbed to the disease on May 4, 1975, at ‘Cedars-Sinai Medical Center’ in Los Angeles. He was laid to rest in an outdoor crypt at ‘Culver City's Hillside Memorial Park Cemetery.’
His autobiography ‘I Stooged to Conquer,’ which he started writing during his final days, released posthumously in 1977 as ‘Moe Howard and the Three Stooges.’ On August 30, 1983, Moe was honored with a Star on the ‘Hollywood Walk of Fame’ at 1560 Vine Street.
Paul Ben-Victor played Moe in the 2000 made-for-TV biopic ‘The Three Stooges.’ Moe was also portrayed by actor Chris Diamantopoulos in the 2012 American slapstick comedy film ‘The Three Stooges.’
You May Like

See the events in life of Moe Howard in Chronological Order