Misha Cirkunov, also known as Mikhail Cirkunov, is a Latvian-Canadian mixed martial star known for competing in the light heavyweight division of Ultimate Fighting Championship (UFC). Cirkunov, who fights out of Toronto, was an accomplished judoka prior to being an MMA. Coming to his achievements, Cirkunov has won thirteen out of sixteen matches up till now. His wins include seven by submission, four by knockout and two by decisions. The eminent mixed martial star currently ranks #7 among light heavyweights in the official UFC rankings list. Talking about Cirkunov’s personal nature and lifestyle, he is a strong and fearless man. He loves to watch movies in his leisure time. He watches comedies and likes to laugh out loud. The MMA fighter, who loves his mother dearly, has dedicated all his wins to her. Cirkunov also teaches children martial arts. He advices them that they should follow their dreams and shouldn’t let anything or anyone stop them from achieving their dreams. Shane Carwin
Mixed Martial Artists #290
Sportspersons #6718
DID WE MISS SOMEONE?
CLICK HERE AND TELL US
WE'LL MAKE SURE
THEY'RE HERE A.S.A.P
Quick Facts

Canadian People
Latvian People
Latvian Men
Male Sportspersons
Latvian Sportspersons
Canadian Sports Personalities
Career
Misha Cirkunov made his professional MMA debut in 2010. He amassed a record of 9-2 before getting signed to Ultimate Fighting Championship (UFC) in 2015.
Cirkunov was about to make his promotional debut on August 23, 2015 against Sean O'Connell at UFC Fight Night 74. However, O'Connell wasn’t able to compete due to an injury and was therefore replaced by Daniel Jolly. In the match, Cirkunov defeated Jolly by first round KO.
Then on February 6, 2016, Cirkunov fought with promotional newcomer Alex Nicholson in which the latter was defeated by the former via a second-round neck crank. In this match, Cirkunov broke Nicholson’s nose and his jaws and came out happy because of his performance. After this, the MMA star faced Ion Cuțelaba at UFC Fight Night 89 in which he won in the third round via submission. Then on December 10, 2016, Cirkunov fought with Nikita Krylov at UFC 206. This match was also won by the former via submission in first round.
In March 2017, Cirkunov made a new, six-fight contract with UFC. In the month of May, he fought Volkan Oezdemir at UFC Fight Night 109 and surrendered to him via knockout in the first round.
On October 28, 2017, Cirkunov was about to face MMA player Glover Teixeira at UFC Fight Night 119. Unfortunately, the pairing was delayed because of Teixeira’s hand surgery. The bout was later on rescheduled for December 16, 2017.
You May Like 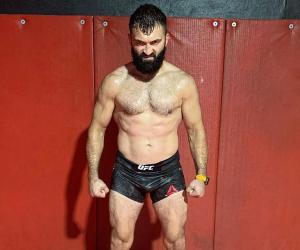