Advanced Search
Miles Alexander Teller better known as Miles Teller is a promising Hollywood actor, widely hailed for his award-winning performances in the films, ‘The Spectacular Now’ and ‘Fantastic Four’. His portrayals in the movies, ‘Whiplash’ and ‘The Divergent Series: Insurgent’ also earned several nominations, bringing him fame and recognition. He demonstrated his creative bent of mind from an early age, excelling as a saxophonist in his high school’s music band. Additionally, he played the drums in a church’s youth choir and was good at a few other musical instruments as well. Following his graduation from the ‘New York University Tisch School of Arts’, he started focusing on his acting career. In the initial years, he had to be content with minor roles in numerous telefilms as well as feature films, including Moonlighters, ‘The Unusuals’, ‘The Musicians’, and ‘A Very Specific Recipe’ to name a few. He received the first major break in his career when he landed the role of Jason in ‘Rabbit Hole,’ which was followed by supporting parts in ‘Footloose’ and ‘Project X’ that he enacted efficiently. He cemented his position as an actor with his roles in the movies, ‘Whiplash’, ‘The Spectacular Now’, ‘Fantastic Four’, ‘War Dogs’ and ‘Only the Brave’. American People
Actors
American Men
Pennsylvania Actors
New York University
Childhood & Early Life
Miles Teller was born on 20 February 1987 in the Downingtown borough under Chester County in Pennsylvania. He is the only son of Mike Teller, a nuclear power plant engineer, and Merry Flowers Teller, a real estate agent. He has two sisters, Erin and Dana, both elder to him. Both his parents hail from Carneys Point, New Jersy.
Miles lived a peripatetic life during his growing up years as his father, a nuclear power station engineer, had to relocate from one city to another. At the age of 12, he shifted to Citrus County, Florida where he was enrolled in Lecanto High School. For a while, he stayed in Delaware and Pennsylvania.
While studying at Lecanto High School, he was chosen as a member of the institution’s rock band where he performed on the alto saxophone. He was also adept in playing the guitar and piano. He was a member of the high school’s baseball team too, and at one time, he cherished the dreams of becoming a professional.
Miles was an associate member of a church’s youth choir where he was a drummer as well as helmed a drama club. He served as a waiter in a restaurant named, ‘Crackers,’ while he was studying in high school.
He graduated from the Tisch School of Arts (affiliated to New York University), receiving his B.A. degree in ‘Fine Arts’. His specialty was ‘method acting,’ imparted by the ‘Lee Strasberg Theater and Film Institute’ where he studied by dint of his receiving a transfer credit from ‘Tisch School of Arts’. 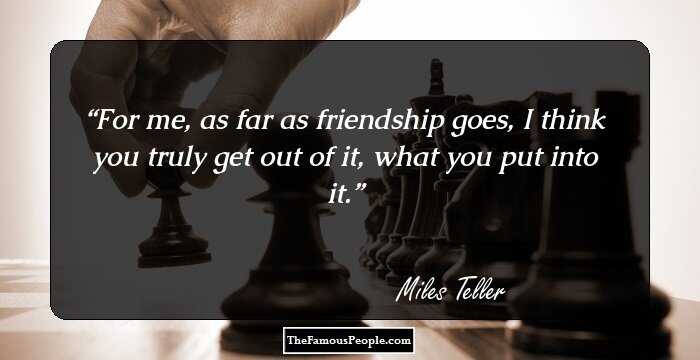 Continue Reading Below
Career
Miles Teller commenced his professional acting career on a low-key note, accepting small roles in low-profile short films and telefilms. He debuted as an actor in the short movie, ‘Moonlighters’ that released in 2004, in which he portrayed a character sharing his first name.
He continued to star in numerous other inconspicuous short films from 2004 through 2010, prominent amongst these were, ‘A Very Specific Recipe’ (2007), ‘The Musicians (2008)’ and ‘The Track Meet’ (2010).
He appeared on the small screen for the first time when he played James Boorland in the series, ‘The Unusuals’ (2009) in an episode titled, “Boorland Day”. ‘The Unusuals’ was a black comedy TV series promoted and broadcasted by ABC.
Teller got the first big break of his career when he successfully auditioned for the part of ‘Jason’ in the John Cameron Mitchell-directed drama movie, ‘Rabbit Hole’, released in 2010. He shared screen space with renowned Hollywood stars, including Nicole Kidman, Aaron Eckhart and Dianne Wiest in ‘Rabbit Hole’.
Miles was vetted for the character of ‘Jason’ by none other than Nicole Kidman. He bagged a Chlotrudis Award in 2011 for his performance in ‘Rabbit Hole’ in the ‘Best Supporting Actor’ category and was also nominated for a ‘Discovery Award’ following the screening of the movie at Savannah Film Festival in Savannah, Georgia.
His next major opportunity came in 2011 when he was offered to reprise Willard Hewitt’s personality in the film adaptation of the musical drama, ‘Footloose’, starring Andie MacDowell, Dennis Quaid, Kenny Wormald and Julianne Hough. He had previously depicted William Hewitt in the musical while he was a high school student.
Following his appearances in ‘Rabbit Hole’ and ‘Footloose’, he started receiving offers to feature in mainstream feature films as well as indie movies. He starred in the critically acclaimed film, ‘Project X’ (2012) that was made on a budget of $12 million but grossed more than $100 million globally.
2013 proved to be a momentous year for Miles as his portrayal of Sutter Kelley in the romantic-comedy film, ‘The Spectacular Now’, was lapped up by his fans as well as critics.
Miles shared the Dramatic Special Jury Award with his co-star Shailene Woodley at the 2013 Sundance Film Festival Award, and he also got nominated for ‘MTV Movie’ and ‘Indiana Film Critics Association’ awards. In 2013, he starred as Miller in the Scott Moore and Jon Lucas-directed comedy film, ‘21 & Over’.
Continue Reading Below
The spectacular success of ‘The Spectacular Now’ in which Teller performed brilliantly as Sutter Kelly catapulted him into the national limelight. From 2014 to 2017, he featured in multiple films each year. The period between 2014 and 2016 was extremely prolific for Miles as he featured in a total of eight movies during this time.
He shared screen space with Michael B. Jordan in the 2014 comedy flick, ‘That Awkward Moment’. He firmly proved his acting acumen by poignantly depicting the role of a jazz student, Andrew Neiman, in the drama movie, ‘Whiplash’ that won rave reviews after the film was screened at the Sundance Film Festival in 2014.
Miles bagged a total of six prestigious nominations for his role in ‘Whiplash,' including the BAFTA Rising Star Award, Satellite Award (Best Actor-Motion Picture), and Gotham Independent Film Award (Best Actor). The movie was nominated for five awards at the ‘87th Academy Awards’ ceremony, out of which it ultimately won three.
Miles’s career soared to a new high when he effectively played Peter Hayes in the sci-fi action film, ‘Divergent’. The film went on to garner more than $288 million in global earnings against a budget of $85 million. He reprised his role as Peter Hayes in the sequels of Divergent, ‘Insurgent (2015) and ‘Allegiant’ (2016).
In 2016, he wowed audiences and critics alike with his memorable performances in the feature films, ‘Get a Job’, ‘War Dogs’ and ‘Bleed for This’. In ‘War Dogs,’ a biographical dark comedy movie, he personalized the notorious drug-dealer, David Packouz.
He was the lead cast in the biopic sports movie, ‘Bleed for This’ (2016) in which he played the role of the world champion pugilist, Vinny Paz. He was cast as Adam Schumann in the movie, ‘Thank You for Your Service’ and as Brendan “Donut” McDonough in ‘Only the Brave’ in 2017.
Miles lent his voice to a character named, Gilbert, in the movie, ‘The Ark and the Aardvark,’ which is in post-production stages (2018). 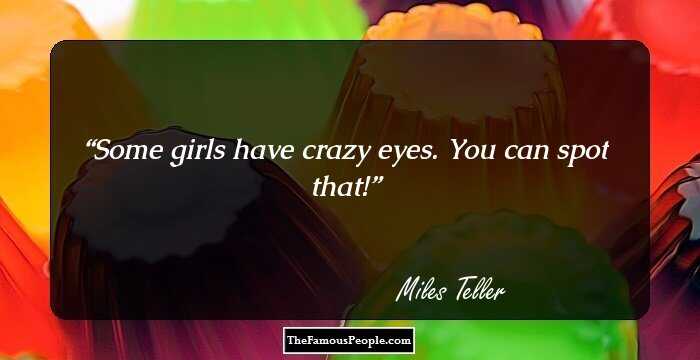 Family & Personal Life
Miles Teller was severely injured in a near fatalistic car mishap in 2007 when he was thrown out of the car’s window. He somehow survived but was left with numerous scars throughout his face, traces of which are still visible.
He claims mixed ancestry, including Russian, Jewish, Irish and English. He has a steady girlfriend, Keleigh Sperry, and grapevine has it that the couple will tie the knot sooner or later.

Quotes By Miles Teller | Quote Of The Day | Top 100 Quotes

See the events in life of Miles Teller in Chronological Order