Mikhail Tal was a Latvian Soviet chess Grandmaster and is regarded as the best attacking player of all time. He became the eighth World Chess Champion in 1960 when he defeated the defending champion Mikhail Botvinnik. Aged just 23 at that time, he set a new record by becoming the youngest-ever world champion (the record would later on be broken by Garry Kasparov, who earned the title at 22). A creative genius, he was known for his improvisation and unpredictability because of which he won so many exciting matches and set numerous world records. He was a brilliant master of the game and once he played 95 consecutive games without a loss—the longest unbeaten streak in modern chess history. His unprecedented success as a chess player earned him the name "The Magician from Riga" and he was virtually unstoppable during his younger days when he was in good health. Over a period of time his health deteriorated and he also became addicted to drinking and smoking which affected his game. In addition to being a brilliant chess player, he was also a highly acclaimed chess writer who authored several books including the very popular ‘The Life and Games of Mikhail Tal’. He was a much loved man and his untimely death at the age of 55 left the world heartbroken
Continue Reading Below

Cause of Death: Hemorrhage

Latvian Celebrities
Male Sportspersons
Latvian Chess Players
Latvian Sportspersons
Scorpio Men
Childhood & Early Life
Mikhail Tal was born in Riga, Latvia, into a Jewish family, on 9 November 1936. His father was a doctor and medical researcher.
He once saw a game of chess being played in his father’s waiting room, and became fascinated with the game. He started learning to play chess when he was eight and eventually began to study the game with Alexander Koblencs, a leading Latvian player, in 1949.
Though he was not a child prodigy, his technique improved greatly after being mentored by Alexander Koblencs, the Latvian chess master. The two would become friends later on.
Never a robust child, he suffered from ill health from a young age. He was plagued by kidney problems in his later years. 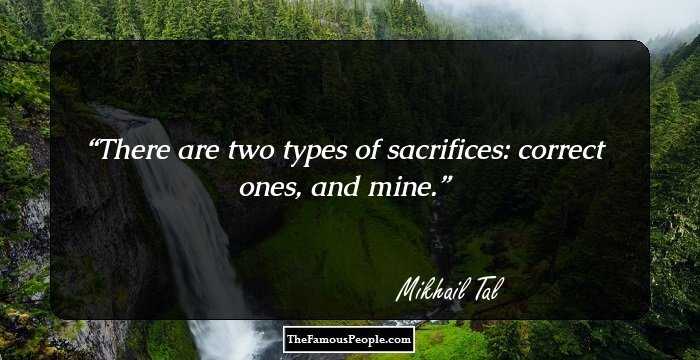 The Best Black Actresses Of All Time
Career
Mikhail Tal first qualified for the Latvian Championship in 1951 and finished ahead of his trainer in the 1952 Latvian Championship. He won his first Latvian title in 1953 and was awarded the title of Candidate Master.
By 1954, he had become a Soviet Master after defeating Vladimir Saigin in a qualifying match. He scored his first win over a Grandmaster the same year.
In 1956, he qualified for the first time for the USSR Chess Championship final and finished joint fifth. The next year he won the championship and at the age of 20 became the youngest player to win it.
In 1957, he graduated in Literature from the University of Riga. Following this he worked as a teacher for a few years in his twenties.
In 1957, he was awarded the Grandmaster title by FIDE. He had not played in enough international tournaments to qualify for this title, but the FIDE decided to waive the normal restrictions and award him the title as he had won the Soviet Championship after beating several top international players.
He represented USSR thrice in the Student Olympiads between 1956 and 1958, and won three team gold medals and three board gold medals. He won a total of 19 games and drew eight without even one loss.
Once again he won the Soviet Championship in 1958 at Riga and also won the Interzonal tournament at Portorož the same year.
He created history in 1960 when he defeated the senior Mikhail Botvinnik in a World Championship match, held in Moscow to become the reigning world champion. At 23, he became the youngest-ever chess world champion at that point of time.
His brilliant career was however interrupted by chronic health problems during the 1960s.
Continue Reading Below
He regained his form during the 1970s and from July 1972 to April 1973, Mikhail Tal played a record 86 consecutive games without a loss (47 wins and 39 draws), and from October 1973 to October 1974, he played 95 consecutive games without a loss (46 wins and 49 draws).
In addition to being a formidable chess player he was also a prolific and highly acclaimed chess writer. He wrote several books which are renowned for their detailed narratives. His autobiography, ‘The Life and Games of Mikhail Tal’ is considered to be one of the best chess books ever written. 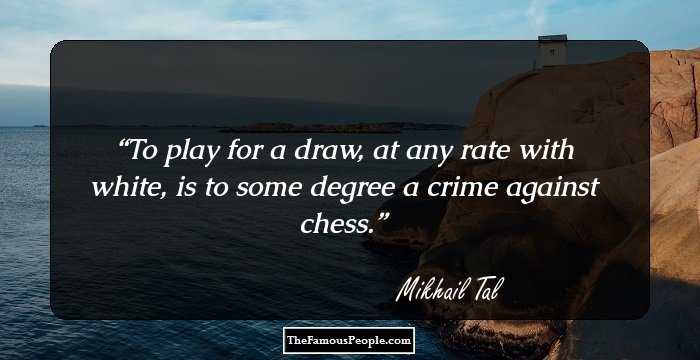 Awards & Achievements
In 1960, when he won the World Chess Championship, he became the youngest-ever world champion. He was 23 at that time. His record was later broken by Garry Kasparov.
He holds the record of playing 95 consecutive games without a loss—the longest unbeaten streak in modern chess history.
Personal Life & Legacy
Mikhail Tal married thrice. In 1959, he married 19-year-old Russian actress Salli Landau. This marriage lasted 11 years and ended in divorce in 1970.
His second marriage too did not last long.
He later on married Angelina Petukhov who worked in the Riga Shakhmaty magazine.
He had been a sickly child though he had fairly good health during his youth. He suffered from kidney problems that intensified over time. He underwent several surgeries over the years and even lost a kidney to his illness.
An eccentric man with a bohemian lifestyle, he became addicted to smoking and drinking which further affected his health. Mikhail Tal died on 28 June 1992 of a haemorrhage in the esophagus. He was just 55.
You May Like

See the events in life of Mikhail Tal in Chronological Order