Michael Pollan is an American author, journalist, activist, and professor of journalism. He is the son of author and financial consultant Stephen Pollan and columnist Corky Pollan. He has written a number of books, essays and articles on food. His first book “Second Nature: A Gardener’s Education” is considered a manifesto for both gardeners and environmentalists. His book “The Omnivore’s Dilemma” was named by The New York Times as one of the five best non-fiction books of the year in which it was published. His “Food Rules: An Eater’s Manual” emphasizes the need for a healthy and sustainable diet. The James Beard Foundation named it winner for the best food writing. His principle is “Eat food. Not too much. Mostly plants”. His other books are “A Place of My Own”, “In Defense of Food”, and the latest “In Cooked: A Natural History of Transformation”. The documentary, “Food, Inc.”, for which he was a consultant and co-star, received an Academy Award nomination. He also appeared in the PBS program based on “The Botany of Desire”. He is a Professor of Journalism at UC Berkeley’s Graduate School of Journalism, and is a contributing writer to The New York Times Magazine. His writings have received numerous awards. American People
Non-Fiction Writers
American Men
Columbia University
Tall Celebrities
Childhood & Early Life
Michael Pollan was born on February 6, 1955 into a Jewish family, and grew up in Long Island. He is the son of author and financial consultant Stephen Pollan and columnist Corky Pollan.
He received a B.A. in English from Bennington College, and an M.A. in English from Columbia University in 1981. He got a job to write for the magazine Channels, and enjoyed publishing and writing. 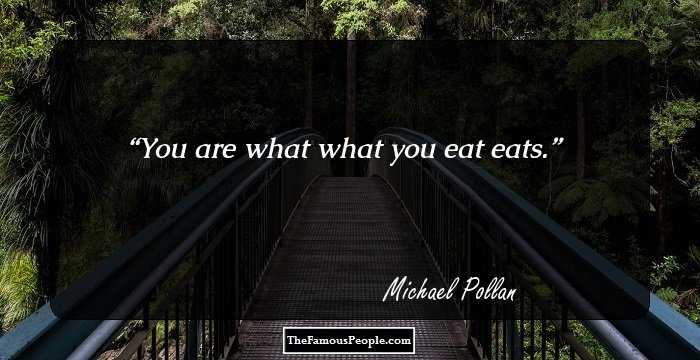 Quotes: You
Continue Reading Below
Career & Later Life
In 1991, Pollan’s book “Second Nature: A Gardener’s Education” was published by Atlantic Monthly Press. The book has become a manifesto for both gardeners and environmentalists, and makes man analyze his relationship with nature.
His “A Place of My Own: The Education of an Amateur Builder” traces the design and construction of out-building, re-released as “A Place of My Own: The Architecture of Daydreams” a decade after.
“The Botany of Desire: A Plant’s-Eye View of the World”, he explores co-evolution, and mankind’s relationship with four plants — apples, tulips, marijuana, and potatoes — from the perspectives of both man and plants.
In 2003, Pollan was appointed the John S. and James L. Knight Professor of Journalism at UC Berkeley’s Graduate School of Journalism, and the director of the Knight Program in Science and Environmental Journalism.
The New York Times named his “The Omnivore’s Dilemma” one of the five best non-fiction books of the year in December 2006. The James Beard Foundation named it winner for the best food writing.
His articles from 1990 to 2006 have been anthologized in Best American Science Writing, Best American Essays, The Animals: Practicing Complexity and the Norton Book of Nature Writing.
Pollan has written for the social psychology magazine, Greater Good, published by the Greater Good Science Center at University of California, Berkeley. His article “Edible Ethics” is about ethical eating and social psychology.
He was a consultant and co-star for the 2008 documentary, “Food, Inc.”, which received an Academy Award nomination. He also appeared in a two-hour PBS special program based on “The Botany of Desire”.
“Food Rules: An Eater’s Manual” published in 2009 provides a simple framework for healthy and sustainable diet and emphasizes on his principle of “Eat food. Not too much. Mostly plants.”
Continue Reading Below
In 2009, he was named by Newsweek as one of the top 10 “New Thought Leaders.” He was also a finalist for the National Magazine Award for best essay.
In 2010, Pollan was interviewed for the film “Queen of the Sun: What are the bees telling us?” — a feature length documentary about honey bees and colony collapse disorder.
His 2013 book “In Cooked: A Natural History of Transformation”, describes cooking in relation to the elements of Fire (cooking with heat), Water (braising and boiling with pots), Air (breadmaking), and Earth (fermenting).
His articles have appeared in many magazines including Harper’s Magazine, where he served as executive editor from 1984 to 1994, National Geographic, Mother Jones, Travel + Leisure, House & Garden and Gardens Illustrated. 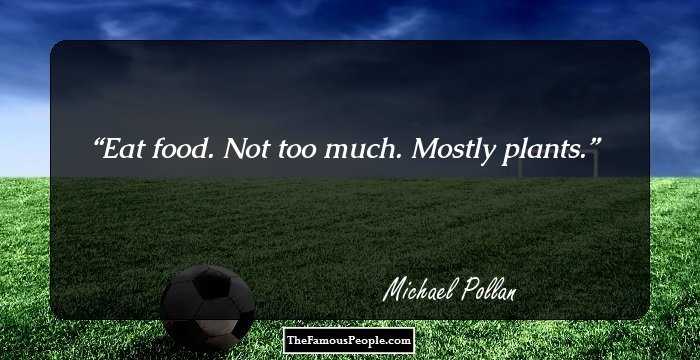 Major Works
Pollan’s 2006 book “The Omnivore’s Dilemma: A Natural History of Four Meals” describes four basic ways by which man has obtained food, namely the industrial, organic, local farm method, and as a hunter-gatherer.
“In Defense of Food: An Eater’s Manifesto” published in 2008, he points out that cultures that perceive food as having purposes of pleasure, identity, and sociality may end up with better health.
Awards & Achievements
Pollan won the John Burroughs prize for the best natural history essay in 1997. His book “Second Nature” won the QPB New Vision Award. He has won the Reuters-I.U.C.N. Global Award for Environmental Journalism.
In 2003, he won the James Beard Award for best magazine series, and the Humane Society of the United States’ Genesis Award for his writing on animal agriculture.
2009 saw him win the President’s Citation Award from the American Institute of Biological Sciences, and the Voices of Nature Award from the Natural Resources Defense Council. 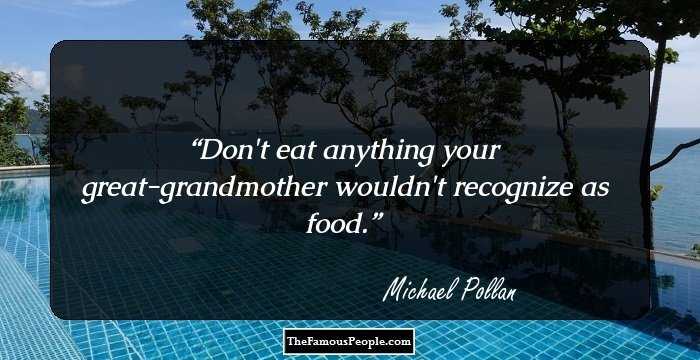 Personal Life & Legacy
Pollan is married to the landscape painter Judith Belzer. They met in 1974, and have been married for 22-years. They live in the Bay Area with their son, Issac.
Trivia
This writer lent support to the Coalition of Immokalee Workers to improve working conditions and wages for tomato pickers’ in Florida. In December 2013, he supported fast food strikers’ demand for $15 dollar/hour wage.
Recommended Lists:
Media Personalities #527

Quotes By Michael Pollan | Quote Of The Day | Top 100 Quotes

See the events in life of Michael Pollan in Chronological Order