Michael McCrudden is an actor and YouTuber from Canada. He is recognized for his YouTube segments ‘Before They Were Famous’ as well as ‘After They Were Famous’, both of which are short documentaries concerning the lives of famous people. He is also known for co-hosting the YouTube channel ‘Information Overload’ alongside fellow YouTube personality Leroy Kenton. McCrudden has been passionate about acting since childhood. He always dreamed of becoming a superstar and constantly worked on his acting skills. Today, he has emerged as a well-known actor who is not only popular on the social media but is also building an image in the mainstream acting industry. A doting son and a caring brother, McCrudden loves spending quality moments with his family whenever he gets free time. Talking about his personality, he is extremely charming and dashing. His unique green eyes and lovely smile are the highlights of his good looks. He is a graduate of McMaster University. Currently, the Canadian YouTuber is also active on Twitter and Instagram. Gigi Gorgeous
26th February In History
DID WE MISS SOMEONE?
CLICK HERE AND TELL US
WE'LL MAKE SURE
THEY'RE HERE A.S.A.P
Quick Facts

Canadian People
Male Youtubers
Pisces Youtubers
Canadian Vloggers
Canadian YouTubers
Rise to Stardom
Michael McCrudden created his solo YouTube channel on September 9, 2009. His first video on the channel was ‘Michael McCrudden 2010 - MTV HOST Audition Tape’ that featured him giving an audition for the job of a TV host. After this, random videos were posted on his channel. Soon, McCrudden joined the YouTube show InformOverload as its host. He began publishing three videos every week for the program and later released ten videos a day!
Recommended Lists:

Pisces Men
On September 22, 2013, he turned a “Jim Carrey” screenplay into his first ever ‘Before They Were Famous’ video. After this, a number of ‘Before They Were Famous’ segments followed. The YouTuber also started to post ‘After They Were Famous’ videos on his channel. These segments became huge hits and eventually increased his channel’s subscriber count. Currently, his channel is followed by more than 2.6 million people (as of September 2018).
Michael McCrudden has also created episodes on numerous celebrities, athletes, actors, social media stars, SoundCloud rappers, and other prominent people. Also, he once ran the series "MostAmazingTop5" segment on his channel, where he broke down news and internet culture into Top 5 lists. The YouTuber, who is partnered with BroadbandTV, has also hosted a dating show called ‘Real, Get Lucky’. He has acted in the comedy film ‘Dumber and Dumber To’ as well.
Also popular on several social media platforms, he has over 46.5k followers on Instagram. Besides this, he is well-known on Twitter as well, with over 17.4k followers.
Continue Reading Below
Personal Life
Michael McCrudden was born on February 26, 1986 in Canada. He has a sister whose name is Alanna. At the age of five, Michael won the title of Little Mr. Mississauga.
He attended McMaster University. He frequently posts pictures of his mother and pet dog on his Instagram profile. Information regarding McCrudden’s love and dating life is missing from the web. 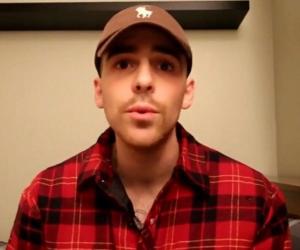