Michael Chiesa is an American mixed martial arts fighter who currently fights as part of the welterweight division of the Ultimate Fighting Championship. He dabbled in wrestling in school. He was trained by Rick Little at the Sik Jitsu Fighting Systems martial arts training institute. Michael is also a “purple belt” in Brazilian Jiu-Jitsu. He made his full-fledged debut as a mixed martial artist with the first live season of the reality show The Ultimate Fighter. Throughout his career, he has won plenty of championships/titles. He has been the winner of the inaugural The Ultimate Fighter: Live. He has also been honored with the Fight of the Night twice, the Submission of the Night twice, and the Performance of the Night once. He was featured in the award-winning documentary Fight Life. Not much is known about his personal life. Drew Dober
DID WE MISS SOMEONE?
CLICK HERE AND TELL US
WE'LL MAKE SURE
THEY'RE HERE A.S.A.P
Quick Facts

Michael Keith Chiesa was born on December 7, 1987, in Aurora, Colorado, United States of America, to Teresa and Mark Chiesa. He is also known by his nickname, “Maverick.”

Michael attended the Shadle Park High School and was a standout wrestler there. He is a “purple belt” in Brazilian Jiu-Jitsu (trained under James Weed). Michael has also trained under Rick Little of the Sik Jitsu Fighting Systems martial arts school.

Michael’s father, who was terminally ill, passed away in 2012, when Michael was fighting as part of The Ultimate Fighter.

Michael Chiesa started his career as a professional mixed martial artist in 2008. He contested in quite a few regional events in the Pacific Northwest and was undefeated in his first seven fights.

Michael soon became one of the 32 lightweight fighters selected by the Ultimate Fighting Championship (UFC) to be part of the first season of the live reality show The Ultimate Fighter.

He defeated Johnavan Vistante in the elimination round and became Team Faber’s fifth pick. His father died soon after his win.

Michael then beat Jeremy Larsen. In the quarter-final round, Michael Chiesa fought Justin Lawrence. However, after two rounds of fights, a draw was declared. The fight then extended to a "sudden-victory" (third) round. In the third round, Michael won and earned a knock-out bonus worth $5,000. The win made him eligible to play in the semi-finals.

In the semi-finals, Michael fought James Vick from Team Cruz. In the second round of the fight, Michael won by knock-out and qualified for the final round against fellow Team Faber member Al Iaquinta.

On December 8, 2012, Michael Chiesa was supposed to be part of a bout against Rafaello Oliveira at UFC on Fox 5. However, Rafaello suffered a broken hand and was replaced by Marcus LeVesseur. Eventually, even Michael stayed away from the fight, as he was down with the shingles, and the fight was eventually canceled.

On February 23, 2013, he fought Anton Kuivanen and defeated him in the second round, with a rear-naked choke.

Michael was then supposed to fight a UFC on Fox 8 match against Reza Madadi on July 27, 2013. In May 2013, however, Reza pulled out of the match due to visa issues. Michael thus faced Jorge Masvidal and was beaten in the second round. He this faced the first loss of his professional career.

On November 6, 2013, Michael Chiesa fought Ultimate Fighter winner Colton Smith, at UFC Fight Night 31. Michael won in the second round and was awarded his second Submission of the Night bonus award.

On May 24, 2014, he won against Francisco Trinaldo at UFC 173. He then faced Joe Lauzon on September 5 that year, at UFC Fight Night 50. Michael eventually lost via TKO in the second round and sustained an injury above his right eye. The game was even stopped for a while due to the injury. However, both Francisco and Michael won the Fight of the Night honors.

On December 10, 2015, he fought Jim Miller at UFC Fight Night 80 and won. He also received his second Fight of the Night bonus award that night.

He won against Beneil Dariush at UFC on Fox 19 on April 16, 2016, and received a Performance of the Night bonus.

Though he was supposed to face Tony Ferguson at UFC Fight Night 91 in July 2016, Michael withdrew from the fight on June 27 due to a back injury. A new fighter, Lando Vannata, fought in his place.

On June 25, 2017, he faced Kevin Lee at UFC Fight Night 112. At a press conference on the match, Kevin and Michael had a bitter argument, eventually leading to a fist-fight and both being escorted out of the conference.

Michael was defeated in the first round but appealed against the result to the Oklahoma State Athletic Commission, claiming that referee Mario Yamasaki had made a mistake by allowing Kevin to use illegal downward elbows to win.

In August 2017, Michael signed a four-fight contract with UFC, in spite of his previous contract.

Michael was supposed to fight Anthony Pettis at UFC 223, on April 7, 2018. However, the fight was called off after he got into a backstage fight with Conor McGregor on April 5, 2018. Connor apparently threw a steel dolly at the UFC bus that Michael was traveling in. A bus window broke, and the glass shards injured Michael. He was hospitalized, leading to the fight being canceled.

On September 10, 2018, Michael declared that he had sued McGregor for assault, battery, and causing emotional distress. Michael sued Barclay's Center, too, for negligence.

Eventually, Michael’s fight with Anthony Pettis was postponed to UFC 226. Michael apparently weighed 1.5 pounds more than the lightweight limit of 156 pounds. Thus, the fight became a catchweight bout, and 30% of Michael’s purse went to Anthony. Michael was defeated in the second round. Soon, Michael announced that he would move to the welterweight division.

On December 29, 2018, he won against Carlos Condit at UFC 232 and thus became MMAJunkie.com’s Submission of the Month for December 2018. On July 6, 2019, he won against Diego Sanchez at UFC 239 and dedicated his win to the late Jess Roskelley, an American mountaineer who had died in an avalanche while on a climbing mission on Howse Peak in the Canadian Rockies.

On January 25, 2020, he fought against Rafael dos Anjos at UFC Fight Night 166 and won. Michael has also won the Lords of the Cage (LOTC) Lightweight Championship once.

Michael Chiesa and his achievements were showcased in the James Z. Feng-directed award-winning mixed martial arts documentary Fight Life, which released in 2013.

Not much is known about Michael Chiesa’s personal life, except that he began dating Kelsi Berger in 2012.

See the events in life of Michael Chiesa in Chronological Order 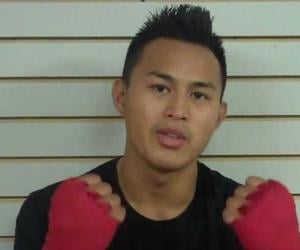