Mary, Crown Princess of Denmark, Countess of Monpezat, R.E., is a member of the Danish royal family. Her husband is Frederik, Crown Prince of Denmark. When/if Frederik, the heir apparent, succeeds his mother, Margrethe II of Denmark, to the Danish throne, Mary will automatically assume the position of the Queen of Denmark. She spent much of her early life in Australia. The daughter of an academic and a secretary, Mary attended the same university where her parents worked, the University of Tasmania, and obtained bachelor’s degrees in commerce and laws from there. She subsequently completed a graduate program in advertising and worked for various Australian and international advertising agencies. She met Frederik in Sydney during the 2000 Summer Olympics. They got officially engaged on 8 October 2003 and married in the following year. The couple has four children together. Since becoming the Crown Princess, Mary has undertaken various activities and served as the representative of the Danish people along with her husband. She is the patron of the Danish fashion industry, several charity initiatives, and various scientific and cultural pursuits. She has also been a vocal advocate for LGBTQ rights. 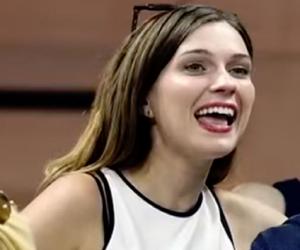 Alexandra of De...
Family Members #47
Miscellaneous #393
Historical Personalities #189
Continue Reading Below
DID WE MISS SOMEONE?
CLICK HERE AND TELL US
WE'LL MAKE SURE
THEY'RE HERE A.S.A.P
Quick Facts

Danish People
Women Historical Personalities
Danish Historical Personalities
Aquarius Women
Childhood & Early Life
Born Mary Elizabeth Donaldson on February 5, 1972, in Hobart, Tasmania, Australia, Mary is the youngest of four children of Henrietta (née Horne) and John Dalgleish Donaldson.
Both her parents are Scottish and worked at the University of Tasmania. Her father is a mathematics professor, while her mother worked as an executive assistant to the vice-chancellor. Her name honours her grandmothers, Mary Dalgleish and Elizabeth Gibson Melrose.
She grew up in Hobart, Australia, with her brother John Stewart and sisters Jane Alison and Patricia Anne. As a child, she took part in sports and other extra-curricular activities. She received piano, flute, clarinet lessons and her favourite sports were basketball, hockey, and swimming. She also participated in equestrian pursuits.
In 1974, she began her education at Clear Lake City Elementary School in Houston, Texas, USA. She received her primary education at Waimea Heights from 1978 to 1983, secondary schooling at Taroona High School from 1984 to 1987, and matriculation at Hobart College from 1988 to 1989.
Between 1990 and 1994, she was a student at the University of Tasmania and earned her bachelor’s degrees in commerce and laws in 1995. She then went on to obtain post-grad certificates in advertising from the AFA and direct marketing from the ADMA in 1996.
Continue Reading Below
You May Like

Famous Beautiful Women With Green Eyes
Professional Life
Following her graduation, she relocated to Melbourne for work. In the next few years, she was employed at various companies, including DDB Needham and Mojo Partners.
She lived in Edinburgh for a while and served as an account manager at Rapp Collins Worldwide. In June 2000, she took a job at a smaller Australian agency, Love Branding. In 2002, she served as an English teacher at a business school in Paris.
Marrying into the Danish Royal Family
During the 2000 Summer Olympics, Mary met the Danish Crown Prince at the Slip Inn, a pub in Sydney. Their courtship lasted for about three years.
On September 24, 2003, the Danish court released a statement, revealing that the Queen would bestow her consent to the marriage at the State Council meeting in October.
Frederik gifted her an engagement ring with an emerald-cut diamond and two emerald-cut ruby baguettes, which resemble the colours of the Danish flag. The couple’s official engagement occurred on 8 October 2003.
They got married on May 14, 2004, in Copenhagen Cathedral, in Copenhagen. Upon her marriage, she was granted Danish citizenship through a special law passed by the Danish parliament. According to reports, they had their honeymoon in Africa.
Their oldest, Prince Christian Valdemar Henri John, was born on October 15, 2005. He was followed by Princess Isabella Henrietta Ingrid Margrethe on April 21, 2007, and the twins Prince Vincent Frederik Minik Alexander and Princess Josephine Sophia Ivalo Mathilda on January 8, 2011.
Regal Duties & Representing Denmark at the Global Stage
Since their marriage, Mary and Frederik have visited several countries as representatives of the Danish people. They have been to Greenland, the Faroe Islands, and attended the 2004 Athens Olympics.
She is actively involved in the efforts of solving the immigrant issues in Denmark. She has surveyed in person the disadvantaged migrant areas of Vollsmose (2006), Gellerup (2007), and Viborg (2010) and taken part in projects of assimilating the immigrants into the Danish society. Mary is a patron of the Danish Refugee Council.
She is also an ardent supporter of the anti-bullying campaign and a promoter of several cultural organisations. She is widely regarded as a patron of Denmark’s native fashion industry.
She also supports research and science and social, health, humanitarian, and sporting organisations. In June 2010, she assumed the role of the Patron of UNFPA, the United Nations Population Fund.
On September 11, 2007, she informed the media about Mary Foundation, which has been set up to help people whose lives have been compromised by environment, heredity, illness or other circumstances. In 2014, she was given a Bambi Award for her accomplishments with the foundation.
A devoted LGBTQ rights supporter, Mary is the first member of the royal family to be present at the Danish Rainbow Awards. She has urged people to stop discrimination, oppression, and violence against others because of their sexual orientation and gender identity.
You May Like

See the events in life of Mary, Crown Princess Of Denmark in Chronological Order