(One of the Most Influential Actors of the 20th Century)

Marlon Brando was an American actor, considered to be one of the greatest and most influential actors of all time. The main male sex symbol in Hollywood during the mid-1950s, Brando was more than a film personality—he was a cultural icon and the heartthrob of generations of women across the globe. Strikingly handsome and talented, he almost became synonymous with the character of Stanley Kowalski which he portrayed in the much acclaimed movie, ‘A Streetcar Named Desire’. This role earned him an Academy Award nomination and established him as one of the foremost leading men in Hollywood. Later on he won an Academy Award for playing Terry Malloy in ‘On the Waterfront’, a performance regarded as one of his finest. Over the years, he appeared in several more films which were critical as well as commercial successes and cemented his reputation as one of the greatest ever stars in Hollywood. Brando was also an activist who supported many causes, including the African-American Civil Rights Movement and various American Indian Movements. Over the course of his career he had earned the reputation of being a “Bad Boy” due to his over-indulgence, excessive womanizing, and public outbursts. But nothing could dampen the affection the audiences had for this charming and good-looking actor Evan Peters
3rd April In History
DID WE MISS SOMEONE?
CLICK HERE AND TELL US
WE'LL MAKE SURE
THEY'RE HERE A.S.A.P
Quick Facts

American Celebrities
American Men
Nebraska Actors
Aries Actors
American Actors
Childhood & Early Life
Marlon Brando was born on April 3, 1924 in Omaha, Nebraska, to Marlon Brando, Sr., and his wife Dorothy Julia. His father was a pesticide and chemical feed manufacturer while his mother was an actress. He had two older sisters.
He had an unhappy childhood as both his parents were alcoholics who never cared about the children. His father was very abusive and had the habit of telling the young boy that he would never amount to anything. His parents eventually separated and he went to live with his mother in California. Later he moved to Chicago after his parents reconciled.
His sister Jocelyn Brando went to study at the American Academy of Dramatic Art in New York City. She recognized Marlon’s potential as a future actor and encouraged him to pursue acting as a profession.
On his sister’s advice he moved to New York to study with the acclaimed acting coaches Stella Adler and at Lee Strasberg's Actors' Studio. Adler was his chief mentor, and he was highly inspired by her. He often credited her for the major role she played in his becoming a successful actor. 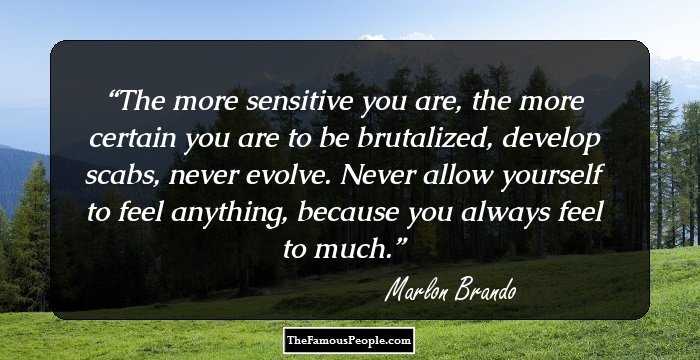 Quotes: You, Love, Never, Yourself
Continue Reading Below
Career
Marlon Brando started out as a stage actor and received much appreciation for his portrayal of the arrogant and cruel Stanley Kowalski in the 1947 play, ‘A Streetcar Named Desire’. After tasting success on the stage he soon moved to films.
He made his film debut in 1950 by appearing in the movie ‘The Men’ in which he played a bitter paraplegic veteran. The next year, he reprised the role of Stanley Kowalski in the film adaptation of ’A Streetcar Named Desire’, and was much appreciated for this performance.
Over the next few years he appeared in many successful movies including ‘Viva Zapata! ‘(1952), ‘On the Waterfront’ (1954), ‘Guys and Dolls’ (1955), and ‘The Young Lions’ (1958). During the mid-1950s, Brando was one of the biggest stars in Hollywood.
In spite of being a major star in the 1950s, his popularity began to decline in the 1960s. By this time he became notorious for his excessive indulgence in food, on-set tantrums, and constant womanizing. His much anticipated movie, ‘Mutiny on the Bounty’ (1962) proved to be a box office flop and he failed to give even one major hit in the decade.
His declining career saw a revival in the 1970s. In 1972, he played the role of Don Vito Corleone in the crime film, ‘The Godfather’. His brilliant performance in the movie resurrected his failing career and re-established him as one of the biggest stars in Hollywood. He won many awards and nominations for the movie.
He appeared as oil tycoon Adam Steiffel in ‘The Formula’ in 1980. Following this, he announced his retirement from acting.
He returned to the big screen in ‘A Dry White Season’ in 1989. He co-starred with Donald Sutherland, Janet Suzman, Zakes Mokae, and Susan Sarandon in the film which dealt with apartheid in South Africa. He played the role of a human rights attorney. 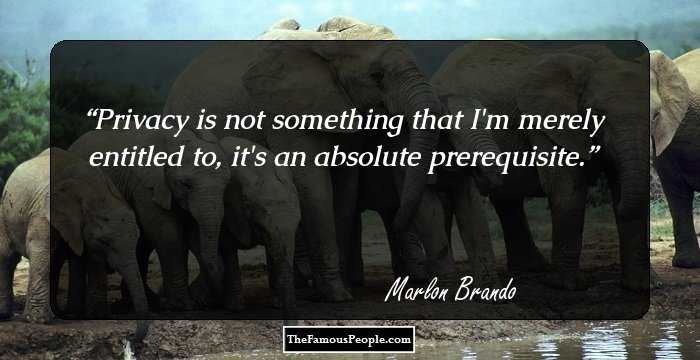 Major Works
His portrayal of Terry Malloy in the crime drama film ‘On the Waterfront’ is undoubtedly one of his best performances. He played the role of a dockworker whose life is deeply affected by the widespread corruption, extortion, and racketeering on the waterfronts of Hoboken, New Jersey.
Continue Reading Below
Marlon Brando also received much acclaim for his role in the crime film ‘The Godfather’, in which he played the leader of a fictional New York crime family. The movie is regarded as one of the greatest films in world cinema.
Awards & Achievements
In 1954, he won the Academy Award for Best Actor for his role in ‘On the Waterfront’. He also won a Golden Globe Award for Best Actor - Motion Picture Drama for the same role.
He won the Academy Award for Best Actor in 1972 for ‘The Godfather’. However, he refused to accept the award citing that he objected to the manner in which American Indians were depicted by Hollywood and television. 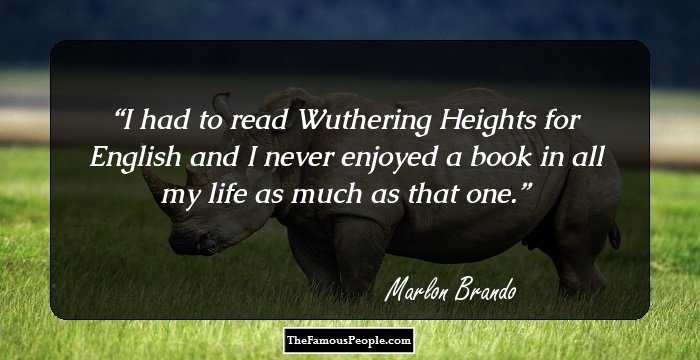 Quotes: Life, Never, I
Personal Life & Legacy
Marlon Brando’s personal life was highly controversial. He was known to be a womanizer and had been involved with several women and fathered numerous children. He had also been married multiple times.
He married actress Anna Kashfi in 1957 with whom he had a son. The marriage ended in divorce.
In 1960, he married Movita Castaneda, a Mexican-American actress. They had two children, and this marriage too did not last long.
His third wife was Tarita Teriipaia whom he married in 1962. This marriage produced two biological children, and he also adopted his wife’s daughter and niece. Tarita and he also divorced.
In addition to his wives, he was involved with several other women. His long-term relationship with his housekeeper Maria Christina Ruiz, resulted in the birth of three more children. He also had children from his other love affairs.
In his last years Marlon Brando had several health concerns. He suffered from diabetes and liver cancer. As a result of diabetes, his eyesight was also adversely affected.
Marlon Brando died of respiratory failure from pulmonary fibrosis with congestive heart failure on July 1, 2004. He was 80

Quotes By Marlon Brando | Quote Of The Day | Top 100 Quotes

See the events in life of Marlon Brando in Chronological Order