Advanced Search
Marisa Tomei is an American film, television, and theatre actor. She made her acting debut in television as ‘Marcy Thompson’ in the series ‘As the World Turns.’ She made her film debut with ‘The Flamingo Kid,’ a comedy film where she played a minor role. Alongside TV and films, she has performed consistently in theatre as well. Her first play ‘Daughters’ earned her accolades and won her the ‘Theatre World Award.’ Following several flicks, she finally received her breakthrough role in ‘My Cousin Vinny’ which gave her international recognition. The film earned her an ‘Academy Award’ for ‘Best Supporting Actress’ and the ‘MTV Movie Award’ for ‘Best Breakthrough Performance.’ She followed it up with several other critically acclaimed performances in films like ‘Untamed Heart,’ ‘Unhook The Stars,’ ‘Before the Devil Knows You're Dead,’ ‘Slums of Beverly Hills,’ and ‘Love is Strange.’ Two other films that earned her nominations at the ‘Oscar’ are ‘In The Bedroom’ and ‘The Wrestler.’ Some of her box office hits include ‘Wild Hogs,’ ‘What Women Want,’ ‘Parental Guidance,’ and ‘Anger Management.’ She received the ‘Drama Desk Award’ for playing ‘Pony Jones’ in the stage drama ‘The Realistic Joneses.’ Her other notable stage dramas include ‘Top Girls’ and ‘Wait Until Dark.’ American People
American Women
New Yorkers Actresses
Boston University
American Actresses
Childhood & Early Life
Marisa Tomei was born on December 4, 1964, in Brooklyn, New York, USA, to Gary A. Tomei and Patricia Adelaide ‘Addie’ Tomei. Her father was a trial lawyer and her mother was an English teacher.
She was brought up by her paternal grandparents for a while.
She often used to visit the Broadway theatre with her parents and was intrigued by the shows that led to her passion for acting.
She attended ‘Andries Hudde Junior High School.’ In 1982, she graduated from ‘Edward R. Murrow High School’ in Brooklyn, New York.
She joined the ‘Boston University,’ Massachusetts, but dropped out to pursue acting. She made her acting debut with the ‘CBS’ television series ‘As the World Turns.’ 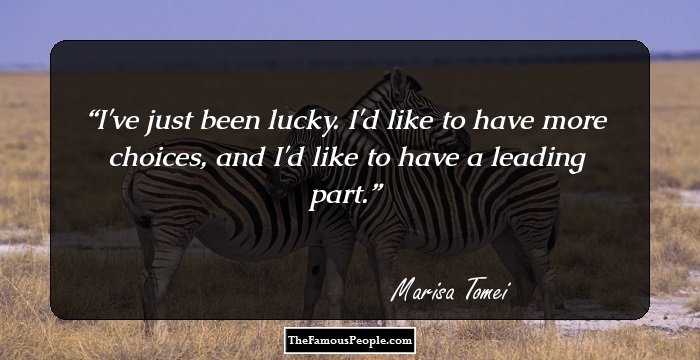 Quotes: Like
Continue Reading Below
Career
Her journey as an actor began in 1983 with the television series ‘As the World Turns.’ She made her film debut, playing the role of ‘Mandy’ in the 1984 film ‘The Flamingo Kid.’
She met with little success in the 1980s, during which she appeared in films, such as ‘The Toxic Avenger’ (1984) and ‘Playing for Keeps’ (1986). She received favorable reviews for her portrayal of ‘Maggie Lauten’ in the 1987 television series ‘A Different World.’
She became part of the New York based theatre company ‘Naked Angels’ as one of its actors. In 1986, her first stage performance in a play titled ‘Daughters,’ where she played ‘Cetta,’ earned her accolades. She also won the ‘Theatre World Award’ for her portrayal of ‘Cetta.’
After appearing in a couple of films in the 90s, she received her breakthrough role of ‘Mona Lisa Vito’ in the 1992 film ‘My Cousin Vinny.’ She earned global recognition and positive critical reviews for her portrayal. She went on to win the ‘Academy Award’ for ‘Best Supporting Actress’ in 1993.
In 1992, she was also featured as actor ‘Mabel Normand’ in the silent film ‘Chaplin,’ opposite Robert Downey Jr., her then boyfriend who appeared in the role of ‘Chaplin.’
Some of her films in the 90s received critical acclaim. These include ‘Untamed Heart’ (1993) for which she received ‘MTV Movie Award’ for ‘Best Kiss,’ ‘Unhook The Stars’ (1996) which earned her a nomination for ‘Screen Actors Guild’ award, and ‘Slums of Beverly Hills’(1998).
She also continued to appear on television throughout the 1990s. She appeared as a host in 1994 in ‘Saturday Night Live’ and made a guest appearance in an episode titled ‘The Cadillac’ in the popular sitcom series ‘Seinfeld.’ She played ‘Mattie Vines’ in the 1998 movie ‘My Own Country’ in which her younger brother Adam was part of the cast.
Her string of stage performances in the 90s include her portrayal of ‘Adriana’ in ‘The Comedy of Errors’ (1992), ‘Katherine Serafima Gleb’ in ‘Slavs!’ (1994), and ‘Susy Hendrix’ in ‘Wait Until Dark’ (1998) among others.
Starting with the 2000 film ‘What Women Want,’ which co-starred Mel Gibson and Helen Hunt, Marisa appeared in some great commercial hits in the 2000s. Her success streak continued with films like ‘Anger Management’ (2003), ‘Wild Hogs’ (2007), and ‘Parental Guidance’ (2012).
Continue Reading Below
Along with appearing in commercial hits, she also received critical acclaim for her performance in several other films during that period. Some of these films include ‘In The Bedroom’ (2001), ‘Before the Devil Knows You're Dead’ (2007), ‘The Wrestler’ (2008), ‘Cyrus’ (2010), and ‘Love is Strange’ (2014). She received a nomination at the ‘Academy Award’ for her performance in ‘In The Bedroom.’
She played the role of ‘Angie Gavin’ in four episodes of the 2006 TV drama series ‘Rescue Me,’ and received the ‘Gracie Allen Award.’
She played the role of a stripper named ‘Cassidy’ in the 2008 film ‘The Wrestler’ which earned her nominations at ‘Academy Awards,’ ‘Golden Globe,’ and ‘BAFTA.’ The film fetched her several critics’ awards, including that of ‘Detroit Film Critics Society,’ ‘Florida Film Critics Circle,’ ‘Online Film Critics Society,’ and ‘San Francisco Film Critics Circle.’
Her fitness DVD ‘Marisa Tomei: Core & Curves’ released in 2010.
In 2011, she hosted the ‘Scientific and Technical Awards.’
On February 10, 2012, she appeared in one of the episodes of ‘Who Do You Think You Are?’ In the episode, she travelled to the Elba Island and Tuscany to unveil the century old murder mystery of Francesco Leopoldo Bianchi, her great-grandfather.
Her stage performances in the 2000s include her portrayal of ‘Salome’ in ‘Salome’ (2003), ‘Isabella Bird/Joyce/Mrs. Kidd’ in ‘Top Girls’ (2008), ‘Marie’ in ‘Marie and Bruce’ (2011), and ‘Pony Jones’ in ‘The Realistic Joneses’ (2014). She won a special ‘Drama Desk Award’ for ‘The Realistic Joneses.
From 2014 to 2015, she appeared in movies like ‘The Rewrite’ (2014), ‘Trainwreck’ (2015), ‘Love the Coopers’ (2015), and the biographical movie ‘The Big Short’ (2015). She received a ‘Screen Actors Guild’ nomination for her performance in ‘The Big Short.’ In 2016, she played ‘Serafina’ in a stage play titled ‘The Rose Tattoo.’ The following year, she appeared in ‘How to Transcend a Happy Marriage.’
In 2016, she also played ‘May Parker’ in ‘Captain America: Civil War.’ She reprised her role as ‘May’ in other ‘MCU’ movies, such as ‘Spider-Man: Homecoming’ (2017), ‘Avengers: Endgame’ (2019), and ‘Spider-Man: Far From Home’ (2019).
Continue Reading Below
In the meantime, she also did other movies, such as the critically acclaimed short movie ‘Laboratory Conditions’ (2017), action horror film ‘The First Purge’ (2018), comedy film ‘After Everything’ (2018), and drama film ‘Frankie’ (2019).
In 2019, she played ‘Carrie’ in Marc Meyers-directed drama film ‘Human Capital.’ On September 10, 2019, the film had its premiere at the ‘Toronto International Film Festival.’ 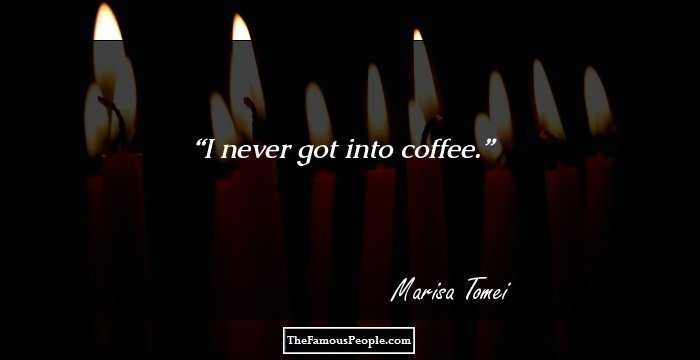 Quotes: Never
Awards & Achievements
In 1993, she won the ‘Academy Award’ for ‘Best Supporting Actress’ for playing the comic role of ‘Mona Lisa Vito’ in the 1992 film ‘My Cousin Vinny.’
Personal Life & Legacy
In the early-1990s, she was romantically involved with Robert Downey Jr. She has starred with him in two films, ‘Chaplin’ (1992) and ‘Only You’ (1994).
She was in a relationship with actor Dana Ashbrook. She has also dated TV writer and artistic director Frank Pugliese.
She was in a relationship with actor Logan Marshall-Green from 2008 to 2012.
She is the godmother of Zoë Kravitz. 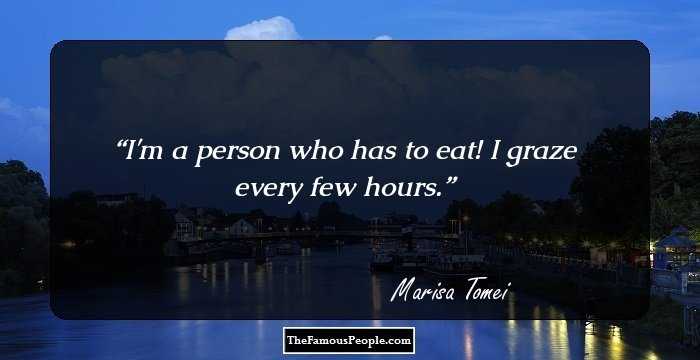 Trivia
In 2008, she was ranked number 18 by the ‘FHM’ in the list of ‘100 Sexiest Females in the world.’
She revealed that she holds dual citizenship of the United States of America and Italy and that she often travels using the Italian passport.
In Italian language ‘Tomei’ means invisible.

Quotes By Marisa Tomei | Quote Of The Day | Top 100 Quotes

See the events in life of Marisa Tomei in Chronological Order