Mario Lopez is an American actor who achieved immense popularity through his television shows. A man of many talents, Lopez was a child prodigy and started to learn dance at the tender age of three and acted in his first TV show at the age of ten. He was an amateur wrestler in high school and thus acquired an impressive physique which would help him get many acting roles later on. He became a teenage heartthrob with his portrayal of a high school athlete in the popular and long-running sitcom ‘Saved by the Bell’. More movie and television roles followed, but it was as a television host that Lopez achieved most successes. Having showcased his acting and hosting capabilities, he got a chance to exhibit his slick dancing moves in the reality show ‘Dancing with the Stars’ and had a fabulous run in the show, eventually finishing runner-up. Not shy of venturing into new fields, Lopez revealed yet another facet of his personality and published a fitness book, two cookbooks and a children’s book. With his diverse body of work, Lopez has acquired a legion of loyal fans waiting eagerly for his next work.
Continue Reading Below 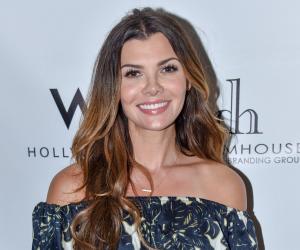 American People
American Men
California Actors
Libra Actors
American Actors
Childhood & Early Life
Mario Lopez was born to Elvia and Mario Lopez, Sr. in San Diego, California. His mother was a telephone clerk and his father a municipal worker. Lopez started learning dancing at the age of three, and was discovered by an agent when he was ten years old.
His first TV appearance was with the comedy series ‘a.k.a. Pablo’ in 1984. The same year, he got another role as a drummer and dancer in the kids’ show ‘Kids Incorporated’, in which he featured for two years.
In the next few years, he made some guest appearances in TV shows. In 1989, he got his first role as a regular in the sitcom ‘Saved by the Bell’, where he played the character of A.C. Slater. This role fetched him a lot of popularity, especially among the teenagers.
He studied in the ‘Chula Vista High School’, where he wrestled for the school team and even participated in the state’s wrestling competition in 1991, where he stood seventh in California. He graduated from high school in the same year.
Continue Reading Below
You May Like

The Sexiest Men Of 2020, Ranked
Career
Over the next few years, Lopez did a cameo in the TV show ‘Superstar American Gladiators’, hosted the game show ‘Masters of the Maze’ and the reality series ‘Name Your Adventure’ and featured in movies like ‘Fever Lake’ and ‘Killing Mr. Griffin’. However, none of them elicited positive responses from the viewers.
Lopez’s next significant role, which also earned him critical acclaim, was with the 1997 movie ‘Breaking the Surface: The Greg Louganis Story’ in which he portrayed the Olympic Gold Medallist, Greg Louganis.
He played an undercover officer in the 1998 crime series ‘Pacific Blue’. The same year, he co-hosted the beauty pageant ‘Miss Teen USA 1998’ with actress Ali Landry.
From 2000 to 2002, he acted in a few low-budget movies such as the horror film ‘A Crack in the Floor’, the comedy ‘Big Brother Trouble’ and the drama ‘King Rikki’. He also hosted the talk show ‘The Other Half’.
In 2002, he was chosen to host the show ‘Pet Star’ on ‘Animal Planet’ and the talent show ‘Second Chance: America's Most Talented Senior’. He also acted in and co-produced the film ‘Outta Time’.
He hosted one-off shows, such as ‘Miss Teen USA 2003’ and ‘Dick Clark's New Year's Rockin' Eve’ in 2003.
2006 turned to be a fruitful year for Lopez as his career got a much-needed boost with the celebrity dance show ‘Dancing with the Stars’, in which he finished runner-up. The same year, he also had a stint in the series ‘The Bold and the Beautiful’, was signed as a presenter for the short-lived show ‘ESPN Hollywood’ and bagged a recurring role in the TV show ‘Nip/Tuck’.
In 2008, he was signed to host two more shows, the still-ongoing ‘Extra’ and ‘America's Best Dance Crew’. He did a supporting role in the film ‘Husband for Hire’ and also made his Broadway debut with the remake of the musical ‘A Chorus Line’. He also published his first book that year, titled ‘Mario Lopez Knockout Fitness’.
In 2010, he published a cookbook called ‘Extra Lean’ which became a bestseller. He also featured with his wife in the reality show ‘Mario Lopez: Saved By the Baby’ which details the life of Lopez and his wife just before the birth of their child.
Continue Reading Below
In 2011, he published ‘Mario and Baby Gia’, a children’s book. This was followed by another cookbook the next year, ‘Extra Lean Family’. That year he also began hosting the radio show ‘ON With Mario Lopez’.
Major Works
Although he started acting from a very young age, it was the sitcom ‘Saved by the Bell’ which made him a household name and a teen sensation. He starred in the show for five seasons and also in its two spin-off movies. In the show, he played A.C. Slater, a popular athlete in high school.
Lopez displayed his dancing prowess in the third season of the dance competition ‘Dancing with the Stars’. Competing with ten other teams, Lopez was paired with professional dancer Karina Smirnoff and the pair went on to finish as runner-ups in the show.
Awards & Achievements
In 1989, he was awarded the ‘Young Artist Award’ in the category ‘Best Young Actor in an Off-Primetime Series’ for his role in ‘Saved by the Bell’.
In 1994, he won a ‘Young Artist Award’ in the category ‘Outstanding Youth Host in a TV Magazine, News or Variety Show’ for hosting the reality show, ‘Name Your Adventure’.
He was chosen as ‘People magazine's Hottest Bachelor’ in 2008.
Personal Life & Legacy
In 1993, allegations of sexual assault were made by two women against Lopez, but no charges were filed as no evidence was found.
While hosting the ‘Miss Teen USA 1998’ beauty pageant, he met co-host and actress Ali Landry and they began a relationship. Their marriage after six years was immediately followed by an annulment because of Lopez’s infidelity during his bachelor party.
In 2006, he entered into a relationship with his ‘Dancing with the Stars’ partner, Karina Smirnoff. The couple ended the relationship after two years.
He started dating Broadway dancer Courtney Mazza in 2008 and married her after four years. The couple have two children, a daughter Gia and a son Dominic.
Trivia
This American actor of ‘Saved by the Bell’ fame hosted a show called ‘Pet Show’ on ‘Animal Planet’ despite being allergic to cats.

See the events in life of Mario Lopez in Chronological Order