Margaret Sanger is a well-known American social activist, sex and birth control educator, and nurse. She made the term ‘birth control’ popular among the natives of the USA. One cannot forget her unparalleled contributions that led to the legalization of contraception in the USA. She supported the legalization of contraception despite facing criticism. She also worked a lot in support of the eugenics. She also believed in equal rights for women and encouraged women to stand up against unwanted pregnancy. She argued that women should protest against unsafe or back alley abortions. She founded the ‘American Birth Control League’ which is now known as the ‘Planned Parenthood Federation of America’ and remained as the president of its international chapter for many years. The first clinic for birth control was established in New York under her supervision with an all-female staff. She also patronized the all American-African clinic at Harlem which was also a first of its kind. She was the founder of the ‘National Committee on Federal Legislation for Birth Control’ that paved the way for the legalization of contraception in the USA. She is considered to be the founder and patron of birth control. Lola Van Wagenen
DID WE MISS SOMEONE?
CLICK HERE AND TELL US
WE'LL MAKE SURE
THEY'RE HERE A.S.A.P
Quick Facts

American Celebrities
Social Reformers
American Women
Women Educators
Women Activists
Childhood & Early Life
Margaret was born Margaret Louise Higgins on 14 September 1879, in Corning, New York, USA, to Michael Higgins, an Irish stonemason, and Anne Higgins.
The sixth-born child among 11 children, Margaret did not have a prosperous childhood. She spent most of her time doing household chores and looking after her younger siblings.
In 1896, she went to ‘Claverack College’ and ‘Hudson River Institute’ as she was inclined towards academics and wanted a better life.
When she turned 21 in 1900, she chose to take up nursing as her subject of specialization and joined the ‘White Plains Hospital’ to help thousands of people suffering from ailments. 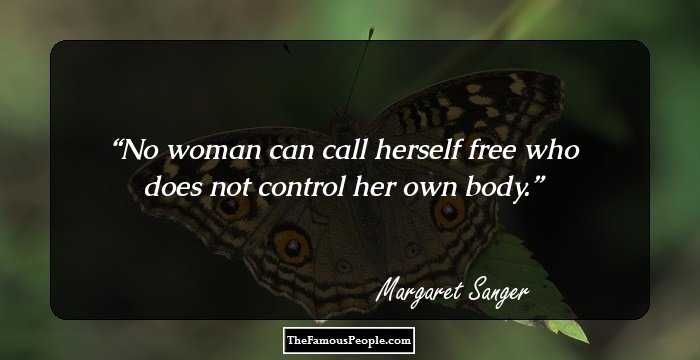 Continue Reading Below
Career
In 1910, Sanger went to Greenwich Village in New York City and settled in a bohemian enclave. She then joined the ‘Women’s Committee of the New York Socialist’ party.
In 1912, while working as a nurse in Lower East side, she started writing educational columns for women. Her works, such as ‘What Every Mother Should Know’ helped many women terminate their pregnancies or undergo back alley abortions.
In 1914, she published a monthly magazine titled ‘The Woman Rebel’ which encouraged women to opt for birth control. The magazine caused legal troubles, thanks to the ‘Comstock Act of 1873.’
In 1916, she managed to set up her first clinic for birth control in the USA. However, the clinic caused sheer unrest in the society. Many raised their voices against her, which eventually led to her arrest and prosecution.
She remained undeterred and went on to establish ‘American Birth Control League’ in 1921, which was later renamed as ‘The Planned Parenthood Federation of America.’ She served as the president of the organization for the next seven years.
In 1923, she established her first legal clinic in the USA. Called as the ‘Clinical Research Bureau’ and later renamed as ‘Birth Control Clinical Research Bureau,’ the clinic helped many women realize their self-worth.
Her dream of legalizing contraception in the country led to the founding of ‘National Committee on Federal Legislation for Birth Control’ in 1929.
In 1936, she ordered a diaphragm from Japan to provoke a decisive battle in the courts of the US. She won the legal battle which eventually helped her gain support for the legalization of contraception in the country.
She became the chairperson of the newly formed ‘Birth Control Council of America’ in 1937. Two years later, she managed to create the ‘Birth Control Federation of America’ by merging ‘ABCL’ and ‘BCCRB.’
Continue Reading Below
Although she was still the president of the organization, she no longer had the same influence that she did in her earlier years. In 1942, she changed the name of the organization to ‘Planned Parenthood Federation of America.’
In 1948, she helped found the ‘International Committee on Planned Parenthood,’ which became the ‘International Planned Parenthood Federation’ in 1952. She was the president of the organization since its inception and remained in that position till the age of 80. 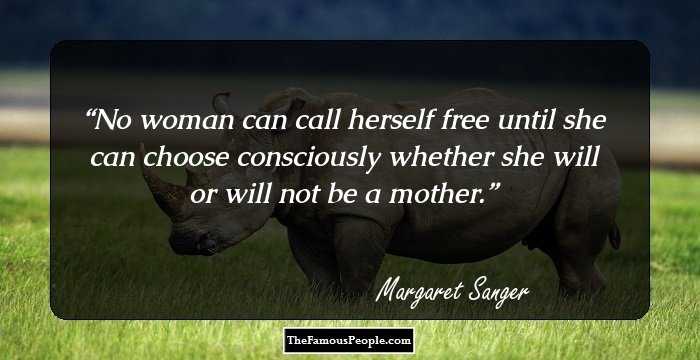 Quotes: Will
Major Works
Sanger started hogging the limelight in 1914 when she came up with ‘The Woman Rebel,’ a monthly magazine on birth control. Through the magazine she imparted relevant information related to birth control to her clients. At the time of its publication, the content of the magazine was either considered to be illegal, immoral, or obscene. However, Sanger braved all odds and went on to educate a horde of women about the importance of birth control and self-respect.
Awards & Achievements
In 1957, she was presented with the prestigious ‘Humanist of the Year’ award by the ‘American Humanist Association.’ 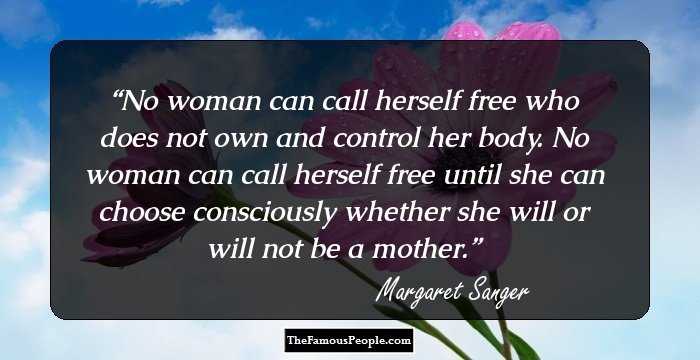 Quotes: Will
Personal Life & Legacy
In 1902, at the age of 23, Margaret married an architect named William Sanger. She had three children with him. The marriage lasted a little less than two decades.
She had brief affairs with psychologist Havelock Ellis and writer H.G. Wells during her stay in England in 1914 and 1920 respectively.
In 1922, she married J. Noah H. Slee, a businessman who used to provide most of the financial help that she needed for her social reform projects.
She passed away due to congestive heart failure in Tucson, Arizona at the age of 86. Her mortal remains were interred in Fishkill, New York.
Many years after her death, she was recognized with many important honors. There are a number of institutions and landmarks that are named after her. Some of them include ‘Margaret Sanger Square’ in Greenwich Village, ‘Margaret Sanger Clinic,’ and a residential building in ‘Stony Brook Campus.’
In 1966, the ‘Planned Parenthood Federation’ began issuing awards in her name to individuals who achieve high recognition or excellence in the fields of reproductive health or reproductive rights.
Trivia
‘National Park Service’ designated this famous birth control educator and social activist’s clinic as ‘National Historic Landmark of the New York City’ in 1993.
Recommended Lists:
Miscellaneous #370
Activists #90

See the events in life of Margaret Sanger in Chronological Order