Comedy was a something this stand-up comedian developed and used during teenage years to deal with bullying. Interesting, isn’t it as to how Margaret Cho journey with comedy began! Inspired by her father’s Korean joke books, Cho began performing at the tender age of 14. Soon she moved to Los Angeles to seek better opportunities and appeared in a series of films in minor roles. She later appeared in the short-lived sitcom, 'All-American Girl', about a Korean-American family. She has appeared in numerous comedy specials, films, has gone on a series of stand-up tours and also launched her own album. She is also an acclaimed author and has authored numerous books including, ‘I'm The One That I Want’ and ‘I Have Chosen to Stay and Fight’. She is a passionate gay rights activist and has been an avid speaker about racism and sexuality related issues, which also have been an intrinsic part of her stand-up acts. Furthermore, she is also an acclaimed fashion designer and has her own clothing line. She has also appeared in music videos. Her role in the TV comedy series, '30 Rock', earned her an Emmy Award nomination. To learn more interesting and intriguing facts about her childhood, personal life and achievements, scroll down and continue to read this biography. American People
Actresses
Stand-up Comedians
LGBT Rights Activists
American Women
Childhood & Early Life
Margaret Moran Cho was born in San Francisco, California to Seung-Hoon Cho, who ran a bookstore and Young-Hie. She was raised in a racially diverse neighbourhood.
She began doing stand-up acts since she turned 14. She was inspired by her father’s Korean joke books and humour, which not only helped her successfully develop her career, but also helped her cope with bullying.
She was deeply passionate about performing arts. As such, she auditioned for the San Francisco School of Arts, wherein she was selected. At 16, she began performing professionally.
She performed at her parent’s bookstore, clubs, university campuses and also made television appearances. She moved to Los Angeles in the 1990’s for better opportunities. 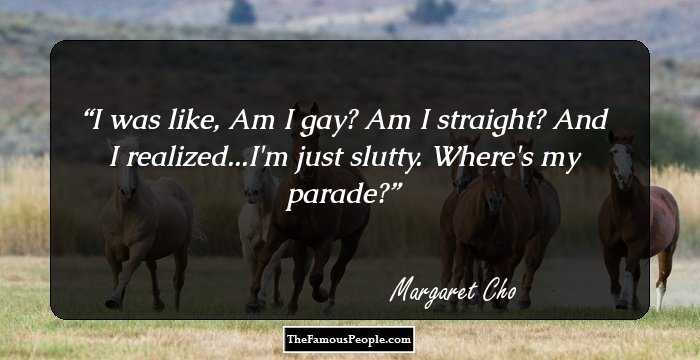 The Hottest Male Celebrities With The Best Abs
Career
In 1992, she played a minor role on the CBS sitcom, ‘The Golden Palace’, which was cancelled after one season. She also appeared in the television movie, ‘Move the Crowd'.
In 1993, she appeared in the episode, ‘Hotline’ of the erotic TV drama series, ‘Red Shoe Diaries’.
In 1994, she played a voice role on the TV show, ‘The Critic’ and appeared in the film, 'Angie'. She also starred in the ABC situation-comedy sitcom, ‘All-American Girl’, in which she played the role of ‘Margaret Kim’. She appeared in 19 episodes of the show, after which the show was cancelled.
In 1995, amidst the failure of ‘All-American Girl’, she hosted the ‘New Year's Rockin' Eve 95’ with Steve Harvey. That year, she played a voice role in the TV show, ‘Duckman’.
Same year, i.e. in 1995, she played the role of 'Queen' in ‘The Princess and the Pea’ episode of the animated TV series, 'Happily Ever After: Fairy Tales for Every Child'. She also appeared in the comedy thriller film, 'The Doom Generation'.
In March 1996, she starred in the American drama film, 'It’s My Party', which was directed by Randal Kleiser.
In 1997, she played a voice role in ‘The Little Mermaid’ episode of the animated TV series, 'Happily Ever After: Fairy Tales for Every Child'. She also played ‘Wanda’ in the action thriller film, 'Face/Off'. The same year, she was seen in the American independent film, ‘Sweethearts’ and the comedy film, ‘Fakin' da Funk’.
In 1998, she played, ‘Caryn’ in the 'Mom’s the Word' episode of the American sitcom, ‘The Nanny’. She was also seen in the TV movie, ‘Five Houses’ and the films, 'Ground Control' and ‘The Thin Pink Line'.
In 1999, she appeared in the movies, 'Can't Stop Dancing' and 'The Tavern'.
Continue Reading Below
In 2000, a concert film, ‘I'm The One That I Want’ was released. The film was about her journey to stardom and the many struggles she faced. A book of the same name was also published.
In 2001, she played the role of 'Lynne' in the 'The Real Me' episode of the TV series, 'Sex and the City'. She also performed on stage in the 'Notorious C.H.O.: Live at Carnegie Hall'.
In 2002, she played ‘Coach’ in the 'Me & My Shadow’ episode of the TV show, ‘One on One’. That year, she founded a clothing line called, 'High Class Cho', which became a failure.
In 2003, she performed a stand-up act, ‘Revolution’, which was released the following year.
In 2004, she launched the ‘Hip Wear’ collection, a set of belly dancing belts and accessories. She also released animated rap videos on her website, like 'Finger' and 'Roofies'.
In 2005, she published her second book titled, ‘I Have Chosen to Stay and Fight’. The book was a collection of essays and prose on topics like human rights, global politics and other topical issues.
In 2005, she starred in the comedy film, ‘Bam Bam and Celeste’, which was also written by her. The film premiered at the Toronto International Film Festival. That year, she also promoted her new show, ‘Assassin’, which later became a concert film.
In 2006, she starred in the romantic comedy film, ‘Falling for Grace', which was directed by Fay Ann Lee. That year, she was also seen in two episodes of the science fiction miniseries, ‘The Lost Room’.
In November 2006, she became a board member of the San Francisco based corporation, 'Good Vibrations'. She also co-wrote the rap-song, ‘My Puss’, recorded as ‘Maureen and Angela’.
Continue Reading Below
In 2007, she starred in three episodes of the American sitcom, ‘Til Death’. That year she began to play a voice role in the animated sitcom, ‘Rick & Steve: The Happiest Gay Couple in All the World’.
On August 10, 2007, she launched the burlesque-style variety show tour, 'The Sensuous Woman'. She was also seen in the short film, ‘Love Is Love’ and the short video, ‘Girltrash!'.
In 2007, she was seen in the video song, 'Shores of California' by ‘The Dresden Dolls'. She was also seen in the video of 'Eyes in the Back of My Head' of 'The Cliks', a Canadian rock band video.
In 2008, she played the role of ‘Det. Mickey Lee’ in the supernatural horror film, ‘One Missed Call’. The same year she was seen in the episode, 'The Day Tammy Wynette Died - Part 1' from the TV series, ‘Sordid Lives: The Series’. She also came out with her single, ‘I Cho Am a Woman’ on iTunes.
On June 24, 2008, she starred along with her family and friends in an episode of NBC’s series, ‘Celebrity Family Feud’, a spin-off game show. That year, she was also seen in the VH1 series, 'The Cho Show'.
In 2009, she was seen in, ‘Drop Dead Diva’, An American TV series. That year she was photographed by photographer Austin Young, subsequently appearing in the 'Heaven-Bound' art show.
In 2010, she completed the eleventh season of ‘Dancing with the Stars’ partnered by Louis van Amstel, finishing at 10th place. The same year, she released her album titled, 'Cho Dependent', which earned a Grammy Nomination.
In 2010, she appeared in the music video, ‘I Wanna Be a Bear’. The same year she was also seen in the TV series, ‘Ghost Whisperer’, as 'Prof. Avery Grant' and ‘The A-List: New York’.
In 2011, she sang, 'Your Favourite Thing' for the 'See A Little Light' tribute concert with Grant-Lee Phillips. That year, her stand-up comedy act featuring musical performances, ' Margaret Cho: Cho Dependent' was released.
Continue Reading Below
In 2011, she played the role of 'Kim Jong-II’ in the TV comedy series, '30 Rock'. That year she was also seen in the short films, 'Mindwash. The Jake Sessions' and 'Thugs, the Musical!'
In 2012, she was seen in the short films, 'Amelia's 25th' and 'The Immigrant'. She was seen on two episodes of the TV comedy series, '30 Rock', her role earned her an Emmy Award nomination.
In 2013, she played the role of 'Mistress Lena' on the episode of 'Bears in Chains' in the comedy-mystery web series titled, 'Where the Bears Are'. 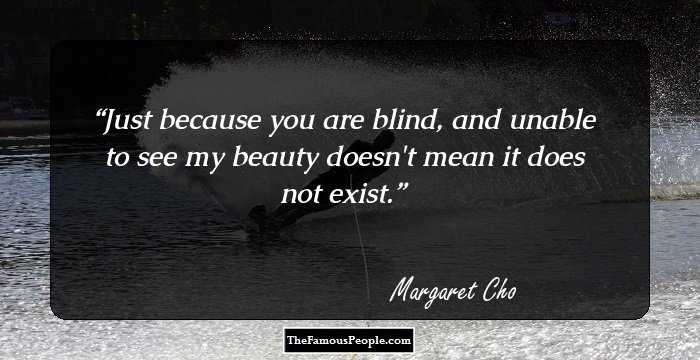 Quotes: You
Awards & Achievements
In 1994, she was the recipient of the American Comedy Award for the category of ‘Best Female Comedian’.
In 2000, she was the recipient of the Golden Gate Award, conferred by the Gay & Lesbian Alliance Against Defamation.
In 2001, she received the Lambda Liberty Award, conferred by Lambda Legal, an American civil rights organisation.
In 2003, she was bestowed a Justice in Action award from the Asian American Legal Defense and Education Fund.
In 2004, she was the recipient of the First Amendment Award, conferred by the American Civil Liberties Union.
Continue Reading Below
In 2007, she was the recipient of the Asian Excellence Award for ‘Outstanding Comedy Performance'.
Personal Life & Legacy
In 1994, she was romantically involved with Quentin Tarantino. She was also in a relationship with musician Chris Isaak and actor, comedian, Scott Aukerman.
From 1995, she began using drugs and alcohol. In one her performances that year in Monroe, Louisiana, she was booed off the stage after her substance abuse became evident in her performance.
In 2003, she married Al Ridenour, an artist. He is in charge of the production of Cacophony Society and the Art of Bleeding.
In 2004, she founded the website, 'Love is Love is Love', that promoted the legalization of gay marriage. She advocates LGBT issues.
In 2005, she campaigned against the death sentence of Stanley Tookie Williams, the leader of ‘Crips’, an American street gang. He was eventually executed.
In 2006, she got a lot of tattoo work done and it is believed that as of 2007 15 to 20 per cent of her body is tattooed.
In 2007, she hosted the ‘True Colors Tour’, a musical event, whose proceeds were donated to the Human Rights Campaign and The Matthew Shepard Foundation.
In 2008, she supported Barack Obama in the 2008 U.S. presidential election.
In San Francisco, April 30, 2008 was declared, ‘Margaret Cho Day’. 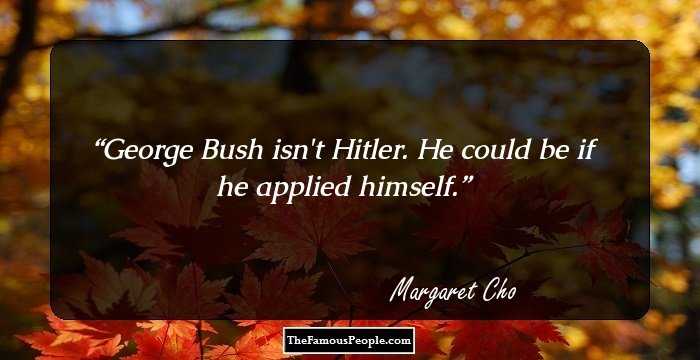 Trivia
Soon after the same-sex marriage became legal in California, in 2008, this Korean-American actress and comedian was deputized to perform marriages.

Recommended Lists:
Film & Theater Personalities #2674
Activists #100
You May Like

Quotes By Margaret Cho | Quote Of The Day | Top 100 Quotes

See the events in life of Margaret Cho in Chronological Order