Mae West was an American actress, screenwriter, and singer ranked among the greatest female stars of Classic American cinema. A well-known sex symbol of her era, she was known to tackle controversial roles and steamy scenes with élan. Her blunt sexuality was what made her both famous and notorious. Mae became interested in the show business at an early age. The daughter of a former fashion model, she was encouraged to participate in amateur shows from a young age. Pretty and naturally talented, she began performing professionally in vaudeville in the Hal Clarendon Stock Company when she was 14. She first gained prominence after her appearance in a Broadway show at the age of 18. By this time there was no doubt in her mind that she was destined to be an actress. With the encouragement of her mother, she went on to establish herself as a successful stage actress before catching the attention of Hollywood. She was almost 40 when she ventured into films, but in spite of her advancing age, she quickly managed to build a reputation as a daring sex symbol. Along with being an actress, she was also a talented screenwriter and singer who released several albums. American Celebrities
Playwrights
American Women
New Yorkers Actresses
Leo Writers
Childhood & Early Life
She was born as Mary Jane West in Bushwick, Brooklyn on August 17, 1893, to John Patrick West and Matilda. Her father was a prizefighter who later opened his own private investigation agency following a stint as a “special policeman”. Her mother was a former fashion model and aspiring actress who had to give up her acting dream due to family pressure.
Mae West developed an early interest in performing and was encouraged by her mother. She started appearing in amateur shows at the age of seven and won prizes at local talent shows. 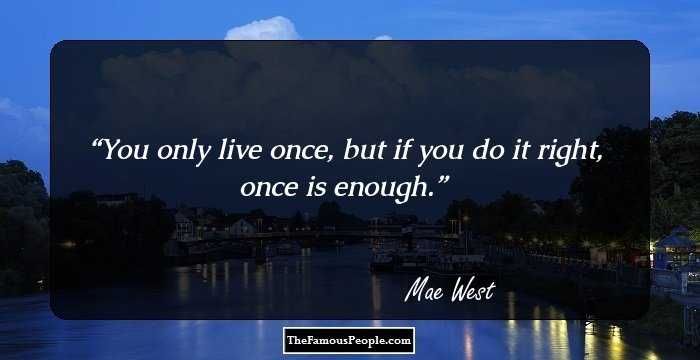 Quotes: You
Continue Reading Below
Career
Mae West began her professional career in vaudeville in the Hal Clarendon Stock Company in 1907 at the age of 14. Initially she performed under the stage name of “Baby Mae” and also used the alias of “Jane Mast” in her early career.
She made her Broadway debut in a 1911 revue ‘A La Broadway’ put on by her former dancing teacher, Ned Wayburn. The show was not successful, but Mae got noticed for her skills. She went on to appear in several other plays over the next few years, earning a reputation as a sex symbol because of her risqué performances.
She began courting controversy early on in her career. Blessed with good writing skills, she also began writing her own plays. In 1926 she wrote, produced, and directed a play called ‘Sex’ in which she also starred. The play was commercially very successful due to the controversial nature of its subject but attracted the notice of city officials who raided the theater and arrested the cast, including Mae West.
West became even more popular after being released owing to the media coverage of the incident. She followed up ‘Sex’ with another highly controversial play called ‘The Drag’ which dealt with homosexuality as she was one of the early supporters of gay rights.
She enjoyed tremendous success as a stage actress and attracted the attention of film producers. Paramount Pictures offered her a motion picture contract in 1932 despite the fact that the actress was now nearing 40. She made her film debut in ‘Night After Night’ starring George Raft.
In 1933 she appeared in the crime comedy film ‘She Done Him Wrong’ which also starred Cary Grant in one of his earliest roles. The film was a box office hit and earned an Academy Award nomination for Best Picture. The same year she was paired up with Grant again in ‘I'm No Angel’ which also proved to be a big hit.
Along with her film career, she also ventured into radio and appeared in two separate sketches on ventriloquist Edgar Bergen's radio show ‘The Chase and Sanborn Hour’. Her radio shows were full of sexually suggestive innuendos that greatly angered the conservative masses, especially the Catholics who deemed her to be vulgar and indecent. This affected her radio career.
During the 1940s her film career too started dwindling and she had to make extra efforts to get meaningful roles. She appeared in just two movies in the decade: ‘My Little Chickadee’ (1940) and ‘The Heat's On’ (1943).
She acted in a few plays in the 1950s and also starred in her own Las Vegas stage show, singing while surrounded by bodybuilders. The show was a success and ran for three years. She released her autobiography, ‘Goodness Had Nothing To Do With It’ in 1959 which went on to become a bestseller.
Continue Reading Below
In the 1960s she embarked on a career as a singer and released several albums including ‘W.C. Fields His Only Recording Plus 8 Songs by Mae West’ (1960), ‘Way Out West’ (1966), ‘Wild Christmas’ (1966).
She also made occasional appearances on television. Her film career was all but over by the 1970s. Her last appearances on the big screen were in ‘Myra Breckinridge’ (1970) and ‘Sextette’ (1978). 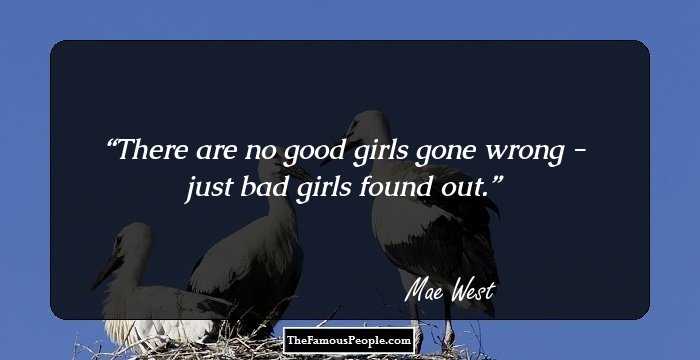 Major Works
The movie ‘I'm No Angel’ was Mae West’s biggest success. It became very popular and probably saved Paramount Pictures from bankruptcy. She wrote the screenplay for the film and starred in it as a singer and dancer. Released in the Pre-Code era, this was one of the few Mae West movies that were not subjected to heavy censorship.
Awards & Achievements
Mae West has a star on the Hollywood Walk of Fame at 1560 Vine Street in Hollywood.
She has been inducted into the American Theater Hall of Fame in recognition of her contributions to the theater. 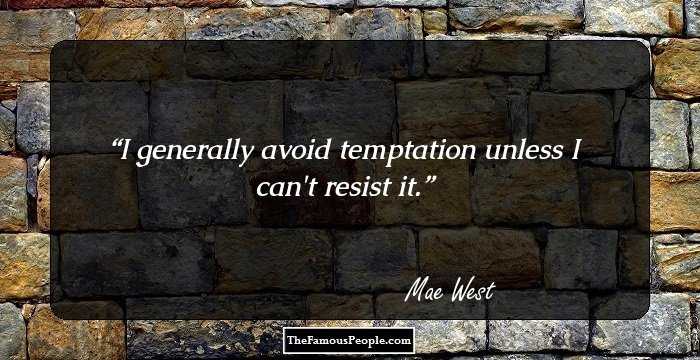 Quotes: I
Personal Life & Legacy
Mae West got married for the first time in 1911 when she was 17 years old. Her husband was Frank Wallace, a fellow vaudevillian. The couple however kept their marriage a secret for a long time and legally divorced in 1942. The couple had never lived together as husband and wife.
She met and developed a passionate affair with the Italian-born vaudevillian Guido Deiro in 1913. The couple broke up in 1916. She also had relationships with other men, including James Timony, an attorney.
She later became involved with Chester Rybinski, one of the muscle-men in her Las Vegas stage show, who was 30 years her junior. He later changed his name to Paul Novak. Their relationship lasted until West’s death.
She suffered a stroke in August 1980 and another in September the same year. Her health worsened over the following weeks and she died on November 22, 1980, at the age of 87.

See the events in life of Mae West in Chronological Order