Advanced Search
M.C. Escher was a world famous 20th century Dutch graphic artist who rose to fame through his innovative and impossible creations in woodcuts, lithographs, and mezzotints, reflecting bizarre optical effects. Although he started off with capturing the scenic beauty of Italy in his realistic sketches and drawings, but eventually, he blended his mathematical concepts into his artworks, thereby making a flourishing career in graphic arts. He crafted several pieces of woodcut after graduating from the School of Architecture and Decorative Arts, Haarlem, and moved to sketching while traveling across Europe, especially Italy and Spain. He ventured into the ‘regular division’ of planes and sketching landscapes with irregular perspectives, creating several masterpieces, namely ‘Eight Heads’ (1922), ‘Castrovalva’ (1930), ‘Metamorphosis’ (1937), ‘Reptiles’ (1937), ‘Day and Night’ (1938), ‘Drawing Hands’ (1948), ‘Relativity’ (1953), and ‘Ascending and Descending’ (1960). His experiments with tilings by using his drawings to carve beechwood spheres proved highly fruitful for him. Besides, he tried his hand at an extremely difficult technique – mezzotint, which produced some of his famous works, like Gallery’ (1946), ‘Crystal’ (1947), and ‘Dewdrop’ (1948). He is credited for composing over 448 lithographs, woodcuts, and wood engravings, apart from 2,000 drawings and sketches, during his entire life Benjamin Keough
DID WE MISS SOMEONE?
CLICK HERE AND TELL US
WE'LL MAKE SURE
THEY'RE HERE A.S.A.P
Quick Facts

awards: Knighthood of the Order of Orange-Nassau

Dutch Celebrities
Gemini Men
Childhood & Early Life
Maurits Cornelis Escher was born on June 17, 1898, in Leeuwarden, Friesland, as the youngest son of civil engineer George Arnold Escher and Sara Gleichman.
When he was five, the family relocated to Arnhem where his elementary and secondary education took place.
Even though he was good at drawing, he failed his high school exams and hence, never officially completed schooling. However, he learnt carpentry and piano till the age of 13.
In 1919, he enrolled at the School of Architecture and Decorative Arts, Haarlem, to pursue a career in architecture, but switched to graphic and decorative arts after a week upon the advice of graphic teacher, Samuel Jessurun de Mesquita.
With considerable knowledge and experience in drawing and making woodcuts, he graduated in 1922. 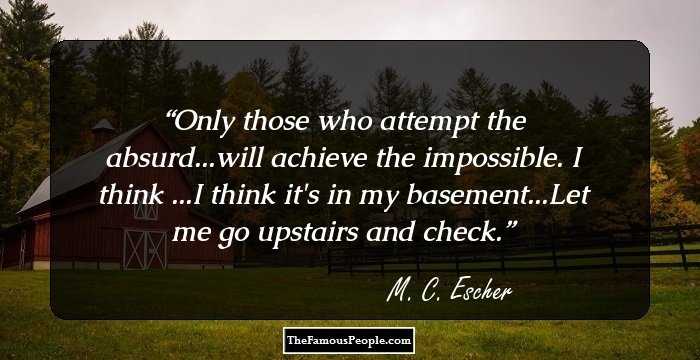 Quotes: Me, Think, Art, I
Continue Reading Below
Career
He used linoleum blocks to produce his first prints, the earliest being a portrait of his father ‘Escher’s Father’ in 1916. However, his woodcuts print ‘St. Francis (Preaching to the Birds)’ became his first recognized work.
After completing school, he travelled across Italy and Spain in 1922, where the 14th century Moorish castle, Alhambra, in Granada, caught his fascination.
He became passionate about the theory of ‘regular division’ of planes, completing his first artistic work ‘Eight Heads’ in 1922 by cutting eight heads – four male and four female in a wood block, and printing the block four times.
His first one-man show in Siena was held in August 1923, followed by another first-man show in Holland in February 1924.
In 1924, he moved back to sketching landscapes of Italy, emphasizing on irregular perspectives which are practically impossible in natural form.
His famous 1925 woodcuts work ‘Days of creation’ was an outcome of his brother’s tragic death in a mountaineering accident.
The late 1920s was his highly productive phase, during which he held numerous shows in Holland and Switzerland and created some of his most beautiful landscapes and striking illustrations, including ‘Castrovalva’ in 1930.
Inspired by the scenic mountains and ancient hill towns of Italy, he went on to create 15 woodcuts, lithographs and wood engravings, the most significant of them being ‘Atrani, Coast of Amalfi’ in 1931.
In 1935, he moved to Chateaux-d’Oex, Switzerland, after traveling through The Hague and Amsterdam in Holland, and worked vigorously on woodcuts and lithographs.
Continue Reading Below
His first creation of an impossible construction was ‘Still Life and Street’ (1937), after which he composed several more works, such as ‘Sky and Water’ (1938), ‘Drawing Hands’ (1948), and ‘Ascending and Descending’ (1960).
He studied a paper on the concept of 17 plane symmetry groups, through which he produced periodic tilings using 43 colored drawings of different types of symmetry.
While experimenting with tilings, he used his drawings to carve beechwood spheres illustrating a motif of swimming fish, which captivated him so much that he held this sculpture as a prized possession for the rest of his life.
Since he was missing the Italian landscapes, he moved to Uccle in the suburbs of Brussels, Belgium. He, yet again, relocated to Baam, Netherlands, during World War II in 1941, where he resumed the ‘regular division’ drawings.
After the war ended, he was struck by another technique, mezzotint, which was extremely difficult, but produced exceptional results. Some of his famous mezzotint works were ‘Gallery’ (1946), ‘Crystal’ (1947), and ‘Dewdrop’ (1948).
While he became a known face in Europe, his popularity in America increased only in 1951 with his interviews published in two magazines ‘Time’ and ‘Life’, which brought him fame as well as orders.
His first one-man exhibition in the United States was held in Washington in the early 1950s. Since he got busy completing orders, his new works saw a gradual decline.
While in the US, he completed several prints, such as ‘Relativity’ (1953), ‘Convex and Conclave’ (1955), ‘Three Worlds’ (1955), ‘Print Gallery’ (1956), ‘Cube with Magic Ribbons’ (1957), and ‘Belvedere’ (1958).
His book ‘Regular Division of the Plane’, a collection of a series of woodcuts, was released in 1958.
Continue Reading Below
His first book of prints ‘Grafiek en Tekeningen’ was published in 1960, which included 76 works personally described by Escher.
In 1969, he created the woodcut ‘Snakes’ which became his last piece of work. The following year, he shifted base to Rosa Spier Huis in Laren, North Holland, where he spent his remaining life. 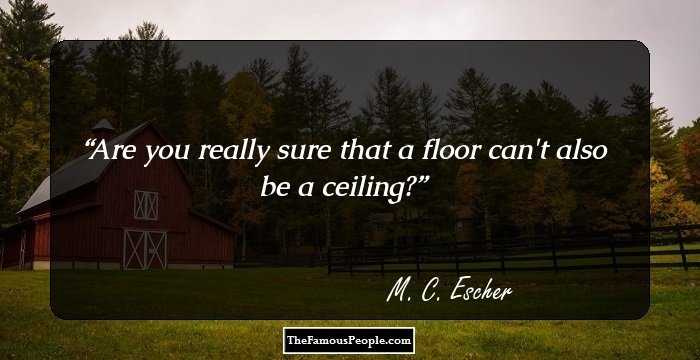 Quotes: You, Art
Major Works
His 1937 woodcuts design ‘Metamorphosis’ is an excellent example of depicting a story through pictures by incorporating mathematics into art. ‘Metamorphosis II’ and ‘Metamorphosis III’ are other larger creations of the series.
His ‘Reptiles’ (1937) is a cult example of an abstract concept, where two and three-dimensional images are perfectly combined to bring the reptiles in the picture to life.
While experimenting with plane-filling techniques, transformations, and shapes, he created an exceptional woodcut print ‘Day and Night’ in 1938, which is regarded as one of his best single works.
Awards & Achievements
He received the third prize at the Exhibition of Contemporary Prints at the Art Institute of Chicago, for his print ‘Nonza’, which was later purchased by the Institute - his first print sale to an American museum.
In 1955, he was bestowed with the Knighthood of the Order of Orange Nassau from the Kingdom of the Netherlands. 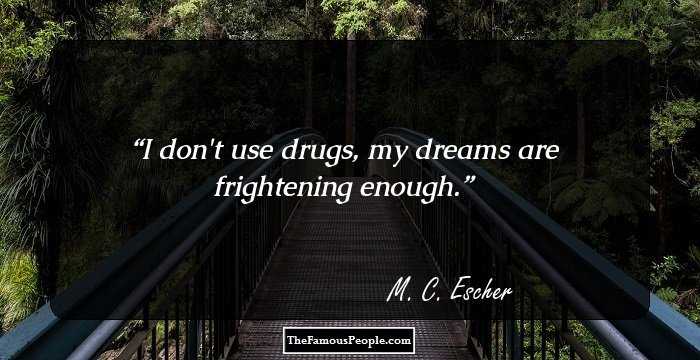 Quotes: Dreams, I
Personal Life & Legacy
He met Jetta Umiker in 1923 while touring Italy and married her in 1924 in Viareggio. The couple moved to Rome, where they lived till 1935.
The couple had three sons – Giorgio Arnaldo Escher (1926), Arthur Escher (1930), and Jan Escher (1938).
He died on March 27, 1972 at his home in Laren, at the age of 73, leaving back a collection of over 2,000 works.
His works are housed in National Gallery of Art (Washington DC), Boston Public Library (Massachusetts), Escher Museum (The Hague), Huis ten Bosch (Japan), Israel Museum (Jerusalem), and National Gallery of Canada (Ottawa).
Trivia
This distinguished graphic artist shared a common trait with a few of his legendary predecessors, Leonardo da Vinci, Michelangelo, Holbein, and Durer – all of them were left-handed.

See the events in life of M. C. Escher in Chronological Order 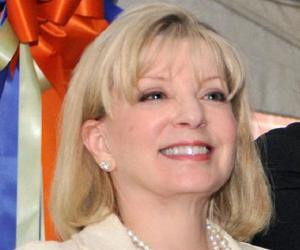 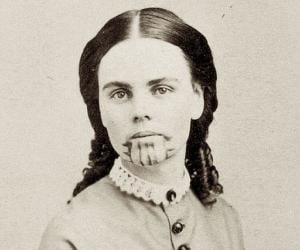