Advanced Search
Lynne Cheney is an American author, historian, and former co-host of CNN’s ‘Crossfire.’ She is the co-founder of a non-profit organization called ‘American Council of Trustees and Alumni’ (ACTA), which strives towards reforming higher education in the United States. From 1986 to 1993, she served as the chair of ‘National Endowment for the Humanities’ (NEH). Thereafter, she was the Second Lady of the United States (SLOTUS) from 2001 to 2009, when her husband Dick Cheney held the office of the Vice President. As the Second Lady, she raised her voice against sexually explicit lyrics in raps and songs. She also criticized video game developers for developing violent and sexually explicit content. Cheney has penned several books, including ‘Sisters,’ ‘Academic Freedom,’ ‘Telling the Truth,’ and ‘The Body Politic: A Novel.’ In the 2018 American biographical comedy-drama film ‘Vice,’ Lynne Cheney was portrayed by Amy Adams. 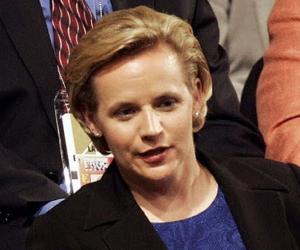 American People
American Women
Women Talk Show Hosts
Women Media Personalities
American Media Personalities
Childhood & Early Life
Lynne Cheney was born Lynne Ann Vincent on August 14, 1941, in Casper, Wyoming, USA, to Wayne Edwin Vincent and Edna Lolita. Her father worked as an engineer, and her mother was a deputy sheriff.
She is of mixed ethnicity as her ancestors were descendants of the ‘Mormon pioneers’ and her familial roots can be traced to England, Ireland, Wales, Denmark, and Sweden. She was raised in accordance with the Presbyterianism tradition.
Cheney grew up in Casper and attended ‘Natrona County High School.’ After graduating from high school, she went to ‘Colorado College’ from where she graduated with a ‘Bachelor of Arts’ degree in English literature. After attending the ‘University of Colorado’ in Boulder to earn her ‘Master of Arts’ degree, she went on to pursue her Doctor of Philosophy (PhD) from the ‘University of Wisconsin–Madison.’
Continue Reading Below
Career
In 1986, Cheney started serving as the chair of the ‘National Endowment for the Humanities’ (NEH). During her time at the ‘NEH,’ she published a report titled ‘American Memory,’ which emphasized the importance of transmitting the knowledge of the past to the present and future generation of students. In the mid-1990s, she served as the chair of the ‘Committee to Review National Standards.’ The committee consists of a group of educators and scholars who assess the national educational standards in the US.
In 1994, Cheney started serving the ‘Lockheed Corporation’ as one of its board of directors. She stepped down from her position in 2001 when her husband was elected as the 46th Vice President of the United States.
In 1995, Cheney founded ‘American Council of Trustees and Alumni’ along with former Colorado governor Richard Lamm, sociologist David Riesman, Senator Joe Lieberman, Nobel Laureate Saul Bellow, former ‘ACTA’ president Anne D. Neal, and Hank Brown. In the same year, Cheney replaced Tony Snow as the co-host of the Sunday edition of the CNN’s television program ‘Crossfire.’ She co-hosted the show until 1998.
The nominating committee for choosing the candidates for the Vice Presidential seat in 2000 mentioned Cheney as a possible Conservative female candidate. Eventually, Dick Cheney was chosen as the Vice President.
As the Second Lady of the United States (Vice President’s wife), Lynne Cheney expressed her concern over the choice of words in albums of popular rappers, such as Eminem. She also raised her voice against violent and sexually explicit content displayed in some of the modern-day video games.
Cheney came up with an annual award ceremony called ‘James Madison Book Award Fund.’ It gives away a cash prize of $10,000 to the author who writes the best book to help young people understand the richness of American history.
Following the death of Senator Craig L. Thomas in 2007, Cheney was considered among other candidates to complete Thomas’ term as the Senator from Wyoming. Though she considered running for the senate seat, she never signed the application to register herself as a candidate.
Cheney is a senior fellow at the ‘American Enterprise Institute for Public Policy Research’ (AEI). She also serves as the director of multi-platform media and publishing company ‘Reader’s Digest Association, Inc.’
Writing Career
Cheney has written several history-related articles for various publications. While writing for publications, her topics ranged from the ‘United States Bicentennial’ to the 1869 women’s suffrage in the West.
Her first book, ‘Executive Privilege: A Washington Novel,’ was published in 1979. Her second novel titled ‘Sisters,’ which portrays the status of women in the Old West, was published in 1981. Set in 1886 in Wyoming, ‘Sisters’ was originally published in a Signet Canadian paperback edition.
She published ‘American Memory: A Report on the Humanities in the Nations Public Schools’ in 1987 and then wrote ‘Academic Freedom,’ which was published in 1992. In her 1995 book, ‘Telling the Truth,’ she analyzed the effect of postmodernism on the study of human society and culture (Humanities).
Her book ‘America: A Patriotic Primer,’ which aimed at educating children about American history, was released in May 2002. Her 2003 book ‘A is for Abigail: An Almanac of Amazing American Women’ highlights women’s contributions to the country. ‘When Washington Crossed the Delaware,’ which was published in October 2004, narrates the famous military campaign of 1776.
Cheney’s 2005 book, ‘A Time for Freedom: What Happened When in America,’ contains a timeline of key moments that shaped the history of America. Her autobiography, ‘Blue Skies, No Fences: A Memoir of Childhood and Family,’ was published in 2007. While ‘We the People: The Story of Our Constitution’ was published in 2008, ‘James Madison: A Life Reconsidered’ was published in 2014.
In Popular Culture
In 2018, Adam McKay directed a biographical comedy-drama film titled ‘Vice.’ The film was based on Dick Cheney’s journey from a lineman to one of the most powerful Vice Presidents of America. While Dick Cheney was portrayed by Christian Bale, Amy Adams played Lynne Cheney. The film received numerous awards, including an ‘Oscar’ for ‘Best Picture’ at the 91st ‘Academy Awards.’
Family & Personal Life
Lynne met Dick Cheney during her high school in Casper, Wyoming. They got married in 1964. They have two daughters and seven grandchildren.
Their elder daughter Elizabeth Cheney was born on July 28, 1966. Elizabeth is married to former general counsel of the ‘US Department of Homeland Security’ Philip Perry.
Cheney’s younger daughter Mary was born on March 14, 1969. Mary married Heather Roan Poe on June 22, 2012, in Washington, D.C. Mary worked at ‘Coors Brewing Company’ as the gay/lesbian corporate relations manager until May 2000. In 2007, Cheney had opposed the constitutional amendment that had banned same-sex marriage across the United States.

See the events in life of Lynne Cheney in Chronological Order