Lucky Blue Smith is a famous American model and musician. He has made it to the cover page of several international fashion magazines, including Vogue. Lucky began his career in modeling as a child. By the age of 12, he had become a seasoned model in the fashion industry. He has not only worked with some of the largest brands but also walked the ramp at prestigious fashion weeks around the globe. His dapper looks and immersing blue eyes have been his biggest strength as a model. With music being his first love, he is also a member of his family music band called The Atomics. His three elder sisters serve as vocalists, while he supports them as a musician/drummer. Lucky Blue Smith has millions of followers on his Instagram account, and thousands of followers on Facebook and Twitter. He has been represented by agencies like Next Model Management and resides in Los Angeles. The media had closely followed his relationship with American actress, singer, model, and former partner Stormi Bree. Hunter Schafer
4th June In History
DID WE MISS SOMEONE?
CLICK HERE AND TELL US
WE'LL MAKE SURE
THEY'RE HERE A.S.A.P
Quick Facts

Coming from a family of stars, Lucky Blue Smith, like his mother and sisters, took the modeling route. When he was 12, he went along with his parents and siblings to get his sister Daisy enrolled in the Next Model Management. However, with destiny carving its own path, all the Smith children, including Lucky Blue, were signed on with the agency.

Shortly after, he worked with Hedi Slimane and featured in Vogue Homme Japan. He immediately became the talk of the town.

Later, Lucky Blue Smith campaigned for top brands like Gap and Levi’s. However, his career sparked when his agent suggested that he give an edginess to his look, and thus he dyed his hair platinum blonde that went on to become his signature look. What followed was his appearance on several international magazine covers and editorials, such as Tom Ford, Vogue, CQ, Elle, Marie Claire, Numero, Harper’s Bazaar, and i-D. He also starred in the Tom Ford’s fashion video for SS16 alongside pop star Lady Gaga.

In 2009, he and his sisters launched their own surf-rock band called The Atomics where he displays his inherent talent as a musician.

Teen Vogue named him Model of the Moment in 2015 and he was also ranked amongst the Top 50 Male Models. He appeared on the Ellen DeGeneres Show the same year. He became an actor with his role as Bridger Jenkins in the 2016 romantic film Love Everlasting.

Lucky Blue Smith’s chiseled body, lanky physique, and long limbs with platinum blonde hair complementing his blue eyes make him a hit in the fashion world. He has many young men aping his style and plenty of women swooning over him. But Lucky Blue Smith is so humble that he wonders what makes him a favorite among women.

Even though he hasn’t received regular education, he is well homeschooled and has great intellect. He is hardworking and adapts to required changes quickly, which has aided him establish a prolific career.

Lucky Blue Smith is athletic and loves sports but his passion is music. Hence, he formed a band with his sisters and is the lead drummer in it. He has a flair for writing and has written an autobiography. He never fails to hit the gym and maintains a healthy diet. He prefers hanging out with his family. His favorite food is sushi and noodles and is a good cook as well.

Lucky Blue Smith was born to Sheridan and Dallon on 4 June 1998 in Utah. He has three elder siblings, Daisy, Pyper, and Starlie; all of them are famous in their own right. Sheridan is a former American model, while her husband is a musician and owner of a guitar-string company. Thus, Lucky Blue Smith has taken after both his parents. He was in a relationship with beauty queen, singer, and actress Stormi Bree, who gave birth to their child, a daughter named Gravity Blue, on July 26, 2017. Lucky Blue Smith married a model named Nara Pellman on February 21, 2020. The couple was blessed with a daughter, Rumble Honey on October 7, 2020. They welcomed their second child, a son named Slim Easy, on January 6, 2022. 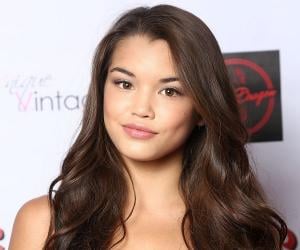