Lucille Clifton, born as Thelma Lucille Sayles, was a prolific poet and author best known for writing on themes related to African-American heritage and feminist issues. She served as the Poet Laureate of Maryland from 1979 to 1985 and won the prestigious Ruth Lilly Poetry Prize in 2007. Her style of prose was concise, free style lyrics with minimum punctuation. She found inspiration for her writings from the lifestyle, problems and challenges faced by her own family and the other African-Americans. Her poems were primarily a celebration of African-American culture and heritage. Her first book of poetry titled ‘Good Times’ published in 1969 was named as one of the best books of 1969 by the New York Times. She went on to create a highly successful book series for children, based on the life of a fictitious boy, Everett Anderson. Both her poetry and fiction dealt with common themes like human capacity for love, overcoming weaknesses, and the myth of the American dream. As the matron of a large family, she often wrote about family life, its triumphs and challenges. Her poems also reflect the process of self-discovery she underwent over a period of time as woman, daughter, sibling, wife, mother, and most importantly, a poet. Alice Walker
Poets #668
Writers #3816
DID WE MISS SOMEONE?
CLICK HERE AND TELL US
WE'LL MAKE SURE
THEY'RE HERE A.S.A.P
Quick Facts

American Celebrities
Poets
Black Poets
Black Writers
American Women
Childhood & Early Life
Lucille Sayles Clifton was born in Ney York to Samuel and Thelma Moore Sayles. Her father was a steel mill worker and her mother was a launderer who wrote poetry as a hobby. In spite of having little formal education themselves, her parents ensured that their children had access to a large number of books.
She went to Fosdick-Masten Park High School and earned a scholarship to study drama at Howard University in 1953. She met several intellectuals such as Sterling Brown, A.B.Spellman and Fred Clifton there.
She had to leave Howard in 1955 because of poor grades, and later studied at Fredonia State Teachers College (now the State University of New York at Fredonia). 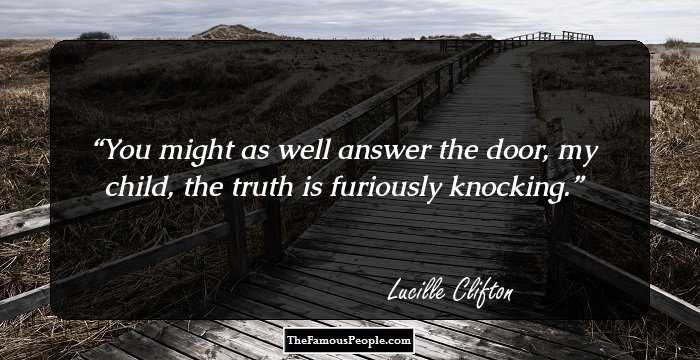 Who Is The Most Popular BTS Member?
Career
She worked as a claims clerk in the New York State Division of Employment from 1958 to 1960 and later as literature assistant in the U.S. Office of Education, Washington, DC where she remained till 1971.
During the 1960’s, she also started writing professionally. Her writer friend, Ishmael Reed submitted her poetry to Langston Hughes who included them in his anthology ‘Poetry of the Negro, 1746-1970’.
In 1969, she published her first collection of poetry, ‘Good Times’ which reflected the happy experiences of her childhood. The book was very well received by the readers.
She was appointed as the poet-in-residence at Coppin State College in Baltimore in 1971, a position which she held till 1974.
Her second volume of poetry, ‘Good News about the Earth’ was published in 1972. The poems reflected the social and political changes that took place in the late 1960s.
She wrote about her experience as a poet and a woman in her next poetry collection which was titled, ‘An Ordinary Woman’, published in 1974.
Along with poetry, she also wrote various books for children, which also celebrated the African-American experience and dealt with themes like love, hope, and dignity. Some of these books include: ‘Don’t you remember?’ (1973), ‘The Times They Used to be’ (1974), and ‘Amifika’ (1978).
Starting from the 1970’s, she wrote a series of children’s books about a young black boy named Everett Anderson. Each book in the series told the story of how Everett faced challenges and dealt with real life social problems.
She was made the Poet Laureate of Maryland from 1979 to 1985.
Continue Reading Below
She took the position of professor of literature and creative writing at the University of California at Santa Cruz in 1985 and remained on the faculty till 1989.
Many of her later works dealt with the social and personal problems faced by women and blacks in general. She spoke of bigotry and intolerance in her 1993 poem collection ‘The Book of Light’, and discussed women’s survival skills in the face of illness and family conflicts in the books ‘The Terrible Stories’ (1996) and ‘Blessing the Boats: New and Selected Poems, 1988-2000’ (2000). 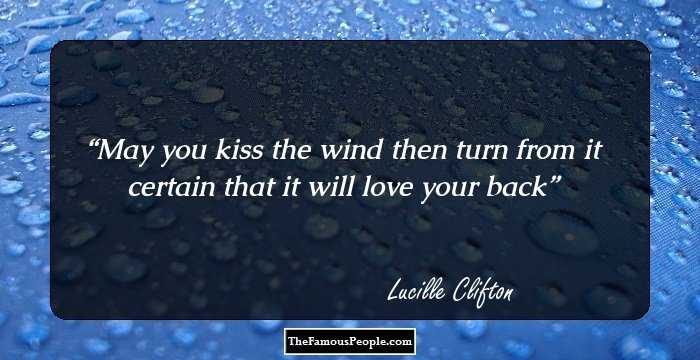 Quotes: You
Major Works
Her first book of poetry, ‘Good Times’ (1969) which was a celebration of the African-American culture in which she grew up, created a sensation soon after being published. It was named as one of the best 10 books of the year by The New York Times.
Everett Anderson, a fictional character of a young black boy who featured in a number of her books is one of her most famous works. She wrote a series of eight Everett Anderson titles and won the Coretta Scott King Award for one of them: ‘Everett Anderson’s Goodbye’ (1984).
Her book, ‘Good Woman: Poems and a Memoir’ (1987) consisting of the reprint of her complete published poems was nominated for Pulitzer Prize in 1988.
‘Blessing the Boats: New and Selected Poems 1988–2000’ was published in 2000 and is considered one of her most poignant works. The poems reflect her views on issues like racism, illness, gender, abortion and death. Many of the poems chronicle her experience as a cancer survivor.
Awards & Achievements
In 1988, two of her poetry books, ‘Good Woman: Poems and a Memoir, 1969-1980’ (1987) and ‘Next: New Poems (1987)’ were nominated for the Pulitzer Prize, making her the first author to have two books of poetry chosen as finalists in the same year.
In 2000, she was awarded The National Book Award for Poetry for her poem collection ‘Blessing the Boats: New and Selected Poems 1988–2000’.
She won the prestigious Ruth Lilly Poetry Prize in 2007. The prize honours a living U.S. poet whose "lifetime accomplishments warrant extraordinary recognition." 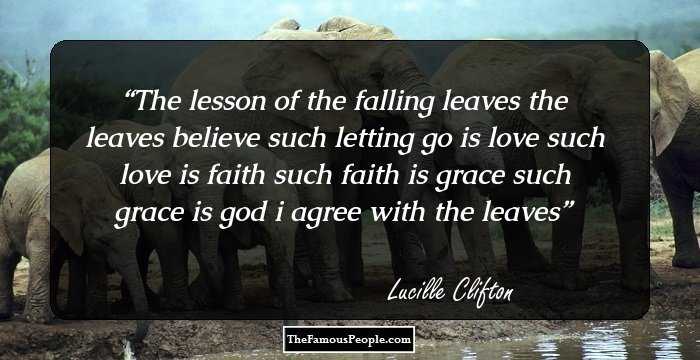 Quotes: Love
Personal Life & Legacy
She married Fred James Clifton, a Philosophy professor, in 1958 and had six children. The couple was happily married till Fred’s death in 1984.
During her later years she suffered from many illnesses including cancer. She died in February 2010 at the age of 73.
Trivia
She was born with two extra fingers which were amputated surgically.
One of her ancestors was the first black woman to be legally hanged for manslaughter in the state of Virginia.
You May Like

Quotes By Lucille Clifton | Quote Of The Day | Top 100 Quotes

See the events in life of Lucille Clifton in Chronological Order