Louise Brooks, a popular actress of the silent era, began her showbiz career as a dancer with a prominent dance troupe, Denishawn Dance Company. But after a while she was dismissed from the company, as her growing popularity threatened the career of the company's co-founder. A blessing in disguise, it paved the way for her entry into films, after being signed by Paramount pictures; she debuted in ‘The Street of Forgotten Men’. She represented the flappers, a generation of brash young women of the time who wore short skirts, bobbed their hair, and rebelled against the accepted social norms. She made the bobbed hair stylish - a style statement. Her choice of films was reflected by her attitude. She was cast in two films by the German director Pabst– ‘Pandora's Box’ and ‘Diary of a Lost Girl’. Both these films were not appreciated at the time of its release, but are now considered classics and two of the most influential films of the period. She broke up with Paramount Pictures, and rejected a lead role in the ‘The Public Enemy’. The film could have revived her sagging career. She was condemned to do small roles and soon retired from films. A spendthrift and an alcoholic, she found it hard to support herself.

Julia Garner
Actresses #2331
Film & Theater Personalities #5946
DID WE MISS SOMEONE?
CLICK HERE AND TELL US
WE'LL MAKE SURE
THEY'RE HERE A.S.A.P
Quick Facts

American Celebrities
Kansas Actresses
Scorpio Actresses
American Actresses
Women Film & Theater Personalities
Childhood & Early Life
Louise Brooks was born on November 14, 1906 to Leonard Porter Brooks, a lawyer, and Myra Rude, a gifted pianist, who nurtured in Louise and her siblings, a love of art.
Sexually abused at 9, she developed a deep distrust of men who were the gentle and kind types. When she confided to her mother, she was told that it, probably, was her own fault. 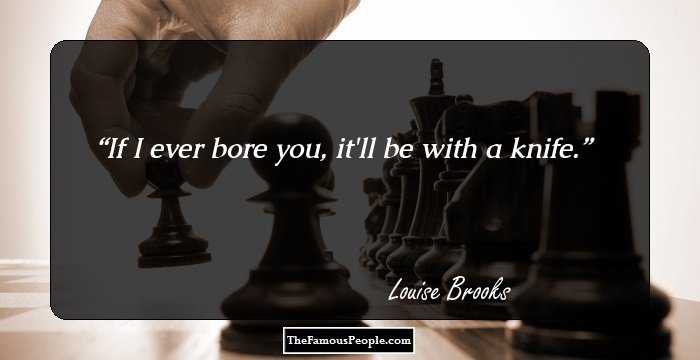 The Best Black Actresses Of All Time
Career
Brooks’ show career began in 1922, as dancer with the leading dance troupe the Denishawn Dance Company, Los Angeles. In 1924, she was dismissed from the company by St. Denis, who envied her growing popularity. She became a chorus girl in ‘Scandals’, a successful series of Broadway revues, produced by George White.
Her dance in Broadway’s ‘Ziegfeld Follies’ in 1925 was noticed by Walter Wanger of Paramount Pictures. She earned a five year contract with Paramount and debuted in the film, ‘The Street of Forgotten Men’.
In 1926, she featured as a flapper in ‘A Social Celebrity’ with Adolf Menjou and Chester Conklin, and co-starred with W.C. Fields in ‘It's the Old Army Game’.
Her role as a vamp named Marie in ‘A Girl in Every Port’, a silent comedy film directed by Howard Hawks in 1928, made her popular in Europe.
In 1928, she acted opposite Wallace Beery in ‘Beggars of Life’ as Nancy, a girl trying to escape abuse. The film has the distinction of being Paramount’s first sound film.
She left Paramount after its chief executive B.P. Schulberg went back on his promise to give her raise. She accepted director G.W. Pabst’s invitation and in 1928, travelled to Germany to work there.
She refused to cooperate in the sound version of her own movie, ‘The Canary Murder Case’ in 1929. Paramount had to engage actress Margaret Livingston to dub for Brooks.
In 1930, she acted in the French film, ‘Prix de Beauté’ (Beauty Prize), directed by Augusto Genina. It was the first sound film done by the actress, although her dialogues and singing were dubbed.
She relocated to Hollywood in 1931. She starred in two films, ‘God's Gift to Women’ and ‘It Pays to Advertise’, but her performances were ignored and virtually boycotted by critics.
Continue Reading Below
Her career virtually ended when she made the mistake of refusing a lead role in William Wellman’s film, ‘The Public Enemy’. The movie established James Cagney and Jean Harlow as stars.
She acted in insignificant films such as ‘Windy Riley Goes Hollywood’, ‘Empty Saddles’, ‘King of Gamblers’ and ‘When You're in Love’. Her last film was ‘Overland Stage Raiders’ in 1938, starring John Wayne.
In 1940, she returned to Kansas and opened a dance studio in Wichita, authored a booklet, ‘The Fundamentals of Good Ballroom Dancing’. Later, she relocated to Manhattan to do radio work.
To support herself, she did a variety of jobs, including publicity and sales work. In 1955, encouraged by film curator James Card, she began writing articles on films, including one called 'Mr. Pabst'. 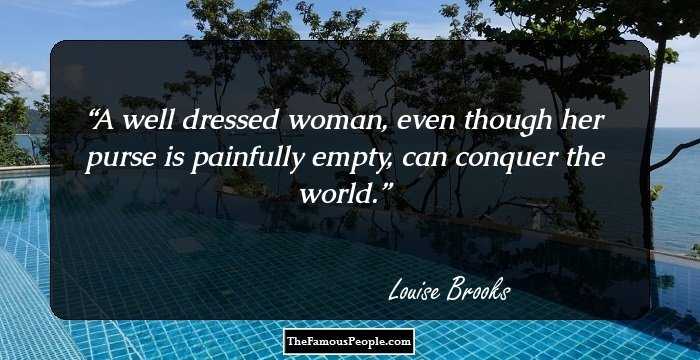 Major Works
In 1929, Brooks played the character of Lulu, a sexually liberated woman, in German director, Pabst’s film, ‘Pandora's Box’. The film, now considered a classic and her finest, included the earliest portrayal of lesbianism.
She essayed the role of Thymian, a naive girl, in the Georg Pabst-directed, 1929 silent film, ‘Diary of a Lost Girl’. The film, an adaptation of a controversial bestseller, is considered a classic.
Personal Life & Legacy
Louise Brooke‘s first marriage to Edward Sutherland, a movie director, resulted in divorce, due to her relationship with entrepreneur George Preston Marshall. She left her second husband, Deering Davis, after five months.
She considered herself sexually liberated and had many lovers, both men and women. By associating with lesbian and bisexual women including Greta Garbo, she tried to create a lesbian image for her.
She inspired two comics – ‘the Dixie Dugan’ newspaper strip published from 1929 to 1966 by John H. Striebel, and the erotic comic books of ‘Valentina’, by the Italian cartoonist Guido Crepax.
In 1991, the British new wave music group Orchestral Maneuvers in the Dark’s hit single, "Pandora's Box" was a tribute to Brooks. They used footage of the actress’s movies to introduce her in the video.
In Gayle Forman’s novels, ‘Just One Day’ and ‘Just One Year’, the chief female character Allyson, is called "Lulu" because of her bobbed hair, similar to that of the actress.
A collection of her writings was published as ‘Lulu in Hollywood’ in 1982. They trace her career and friendship with Charles Chaplin, W. C. Fields, Humphrey Bogart, William Paley and Pabst. 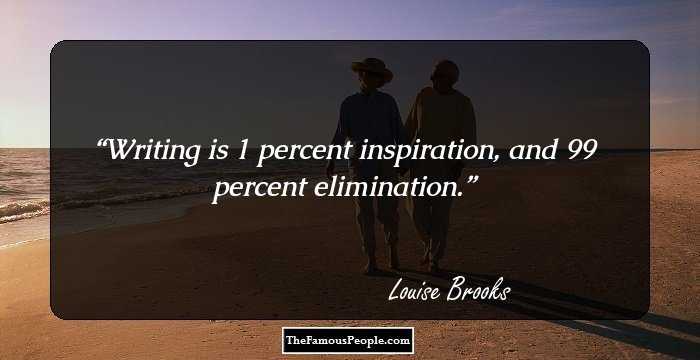 Trivia
This actress, a representative of the rebellious young women called "flappers", destroyed her first autobiography, entitled 'Naked on My Goat'.
This actress, who stood No. 44 on the list of the 100 Sexiest Stars in film history, endorsed the Lux Toilet Soap.
You May Like

See the events in life of Louise Brooks in Chronological Order