Lorraine Broussard Nicholson is an American actress. She mesmerized the audience in the biographical film ‘Soul Surfer’ where she plays the role of Alana Blanchard, the best friend of Bethany Hamilton who loses an arm in a shark attack and how Bethany helps her wind surf later. She is the daughter of well-known actor Jack Nicholson. She is a very talented and hard working actress with immense beauty. She is hardly active in social media and this proves that she does not want her private life to go public. Lorraine has an amazing body to flaunt. Some of her pictures in bikini prove that she has gorgeous assets and a super hot figure. Most of her bikini stills have been viral on media have garnered a lot of admirers. 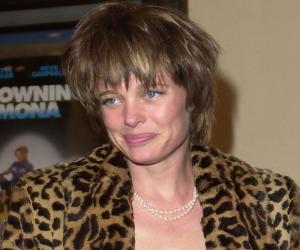 Sadie Sink
Actresses #2027
Film & Theater Personalities #4948
Continue Reading Below
DID WE MISS SOMEONE?
CLICK HERE AND TELL US
WE'LL MAKE SURE
THEY'RE HERE A.S.A.P
Quick Facts

American People
California Actresses
Aries Actresses
American Actresses
Actresses Who Are In Their 30s
Childhood & Early Life
Lorraine Broussard Nicholson was born on April 16, 1990 in Los Angele, California. She was born to famous actor, film maker and Academy winner, Jack Nicholson, and Rebecca Broussard, who is also an actress and a model.
She was named after her father’s aunt and she attended Brentwood School in California. In May 2012 she graduated from Brown University with a degree in Literary Arts. She has a younger brother Raymond as well as three older siblings from her father’s earlier marriage; two half-sisters - Jennifer Nicholson and Honey Hollman, and a half-brother, Caleb Goddard.
Her parents divorced when she was just three years old. Lorraine is very passionate about acting and also wishes to direct and write her own projects someday.
Continue Reading Below
You May Like

Who Is The Most Popular BTS Member?
Career
Lorraine debuted at the age of 13 years in 2003 with the film ‘Something’s Gotta Give’. He father was also one of the casts of the movie. Although she had a small role in the film but it did leave an impression on the casting directors.
In 2004, she enacted the role of Princess Lorraine in the romantic comedy film titled ‘The Princes Diaries 2: Royal Engagement’ which starred Anne Hathaway and Julie Andrews. At the age of 14 she acted in Adam Sandler’s 2006 film titled ‘Click’ as Samantha Newman, the teenage daughter to Sandler’s character as Michael.
Lorraine appeared as a voice actor ‘Katie’ in the animated feature film titled ‘Fly Me to the Moon’ in 2008, and in 2009 she appeared in a supporting role in the film ‘World’s Greatest Dad’ in the role of Heather costarring late Robin Williams.
She enacted the role of Vanessa in the 2012 film ‘The Cottage’, and next in 2014 she acted in the drama romance short film ‘The Pimp and the Rose’. Lorraine appeared on screen as Kira Whittal in the crime drama thriller titled ‘Hacker’ in 2015 and as Sam in the thriller ‘Room 105’ in 2016. In the same year she played the role of an expert hacker in the film ‘Anonymous’.
However, she is mostly admired and appreciated for her role in a real life story movie ‘Soul Surfer’ of 2011 and for this challenging role Lorraine had to do a short course in surfing. Lorraine also wrote, directed and produced a drama titled ‘The Instant Message’ in the same year.
Personal Life
Lorraine has kept her personal life discreet from her professional life. Hence, there is no information about any previous relationship or any news about her latest boyfriend, her family status or with whom she hangs out with.
Trivia
Although she belongs to an affluent family but she wants to be known by her works. She does not bring any ego in her work zone.
She was honored with ‘Miss Golden Globe’ in 2007 which is a ceremonial position given to teenage daughters of famous parents at the annual Golden Globe Awards.
Lorraine wants to be recognized as a hard working actress and she does not want to be famous by posting her photos in social media or flashing her relationships so that it can be a topic of gossip.
She is a fan of Los Angeles Lakers basketball team just like her dad.
There were rumors that her father was suffering from memory loss and contemplating to retire from films but the news was denied as being false and her father is quite healthy.

See the events in life of Lorraine Nicholson in Chronological Order