Lord Horatio Nelson is considered as one of the most heroic figures of Britain. Serving as the first Viscount, he was a British flag officer who was known for his commitments in the Royal Navy and his service during the Napoleonic Wars. What gave Nelson an edge over other Navy officers was his quick grasp of strategy and unconventional tactics. These abilities earned him a number of decisive naval victories. He steadily rose through the ranks and served with leading naval commanders of the period before obtaining his own command in 1778. Under Nelson's leadership, the Royal Navy proved its supremacy over the French. His most famous engagement, at Cape Trafalgar, saved Britain from threat of invasion by Napoleon. In 1805, his fleet was engaged at the Battle of Trafalgar where he was fatally wounded by a French sniper. His death secured him the position of one of Britain’s most heroic figures and recorded a legacy that remains highly influential till date. Reginald Dyer
DID WE MISS SOMEONE?
CLICK HERE AND TELL US
WE'LL MAKE SURE
THEY'RE HERE A.S.A.P
Quick Facts

awards: - Knight of the Order of the Bath
- Order of the Turkish Crescent for his role in restoring Ottoman rule in Egypt
- Freedom of the City of London 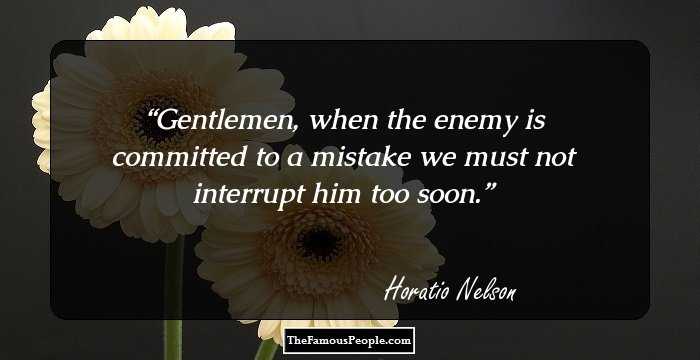 Continue Reading Below
Career
He commenced his career early at the age of 12 as an ordinary seaman and coxswain in the HMS Raisonnable. No sooner, he was appointed to the position of midshipman and started receiving his officer training.
He rose through various ranks, eventually achieving the rank of the captain in 1778. He then served in the West Indies, Baltic and Canada. In 1793, with the entry of Britain in the French Revolutionary Wars, he was given the command of the Agamemnon.
It was while serving in the Mediterranean that he helped in the capture of the Corsica and fought in the Battle at Calvi together with Lieutenant General Charles Stuart. While he looked after the bombardment of the enemy camp, Stuart moved forward taking control of the place. It was during the constant bombardment that he irreparably damaged his eye and eventually lost sight of his right eye.
Following this, he led British navy to record a stunning victory against French in the Battle of Cape St. Vincent in 1797. His trademark style of disregarding official orders and taking it on his own proved worthwhile as it only helped in the victory.
After the success at the Battle of Cape St Vincent, he participated in the attack on Santa Cruz de Tenerife in the Canary Islands where he wounded his right arm, leaving himself amputated. He was then forced to return to England to recuperate
The following year, he won a decisive victory at the Battle of the Nile over the French and remained in the Mediterranean to support the Kingdom of Naples against a French invasion.
He next fought at the Battle of Copenhagen. Despite losing his eyesight and having his arm amputated, he did not cease to have a dominating role in the combat and pursued the same in his own style disrespecting the orders to stop the action by putting his telescope to his blind eye and claiming he couldn't see the signal to withdraw.
By 1801, his prowess and calibre helped him gain the position of a Vice-Admiral. Attaining the position, he became increasingly engaged in Napoleonic wars with France.
After a brief return to England, he took over the C�diz blockade in 1805. The same year, he engaged himself in what would turn out to be the last battle of his life. The Franco-Spanish fleet came out of port and his fleet engaged them at the Battle of Trafalgar. The battle turned out to be Britain’s greatest naval victory but Nelson was badly fatally injured.
Continue Reading Below 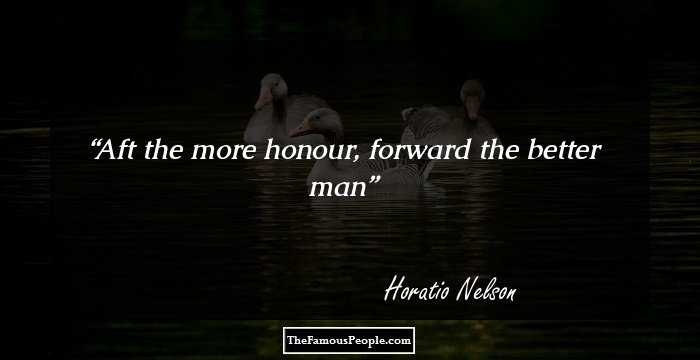 Awards & Achievements
In 1802, University of Oxford conferred upon him the honorary degree of Doctor of Civil Law.
He served as the Colonel of the Royal Marines and voted a Freeman of Bath, Salisbury, Exeter, Plymouth, Monmouth, Sandwich, Oxford, Hereford, and Worcester.
At the time of his death, he held numerous titles such as The Most Noble Lord Horatio Nelson, Viscount and Baron Nelson, of the Nile and of Burnham Thorpe in the County of Norfolk, Baron Nelson of the Nile and of Hilborough in the said County, Knight of the Most Honourable Order of the Bath, Vice Admiral of the White Squadron of the Fleet, Commander in Chief of his Majesty's Ships and Vessels in the Mediterranean, Duke of Bront� in the Kingdom of Sicily, Knight Grand Cross of the Sicilian Order of St Ferdinand and of Merit, Member of the Ottoman Order of the Crescent, Knight Grand Commander of the Order of St Joachim.
Personal Life & Legacy
He married Frances Fanny Nisbet, a young widow at Montpelier Estate on the Island of Nevis on March 11, 1787.
He was in a relationship with Emma Hamilton, the wife of William Hamilton, the then British Ambassador to the Kingdom of Naples. It was while on a voyage to England that the two were blessed with an illegitimate daughter - Horatia.
At the Battle of Trafalgar, he was fatally wounded by a French sniper, which led to his death. His body was later brought back to England from Victory at the Nore. He was laid in state for three days at the Painted Hall at Greenwich
His coffin, which was taken to the Admiralty for the night, was later taken to a funeral procession with 32 admirals, over a hundred captains, and an escort of 10,000 soldiers who took the coffin from the Admiralty to St Paul's Cathedral. Four hours later, he was interred within a sarcophagus originally carved for Cardinal Wolsey
Posthumously, numerous monuments such as Nelson's Column in Trafalgar Square, London, Nelson’s Pillar in Dublin, a statue in Montreal and a Royal Society of Arts blue plaque were created in his memory. 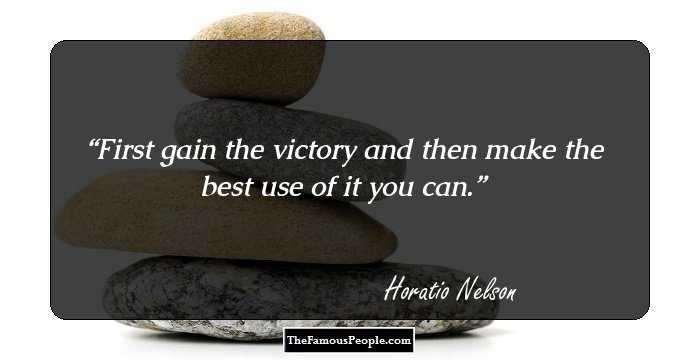 See the events in life of Horatio Nelson in Chronological Order